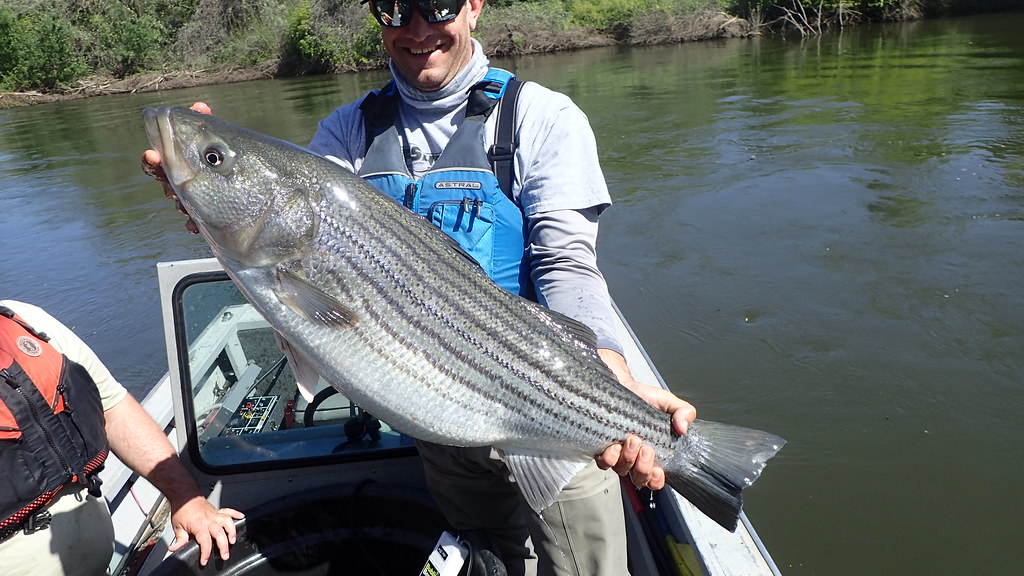 Nearly any predator that can get its claws, beak, or teeth on a juvenile Chinook salmon (Oncorhynchus tshawytscha) will try to eat these young fish as they migrate to the ocean – and as salmon try to evade one hungry mouth, they may be vulnerable to getting eaten by another. Predation is a complex topic in part because the behavior of one predator may affect the activities of another, and these activities can also be influenced by factors like flow, temperature, and available habitat. Warming temperatures, which can alter predator consumption rates and the ability of prey to evade, may be particularly important to understand for Chinook salmon in California’s Central Valley, as this southernmost portion of the species’ range is already experiencing climate change-related impacts. To test the hypothesis that warming temperatures may intensify the effects of the two most abundant non-native salmon predators – largemouth bass (Micropterus salmoides) and striped bass (Morone saxatilis) – on migrating Chinook smolts in the Sacramento-San Joaquin Delta, a recent effort synthesized data from multiple survival studies to develop simulation models (Nobriga et al. 2021). They found that because striped bass and largemouth bass occupy different habitats, the presence of both predators leaves limited options for salmon refuge. They also found that predation by largemouth increased as temperatures warmed, while striped bass predation remained constant and had a greater quantitative impact on the survival of salmon smolts compared to largemouth bass.

The researchers hypothesized that the predation risk faced by smolts varies seasonally, and that the different physiologies and hunting strategies of striped bass and largemouth bass may restrict habitat options for migrating smolts. By synthesizing data from past acoustic telemetry and predation event recorder (PER) studies, they sought to identify the temperature threshold beyond which smolts would not survive, to recreate estimates of survival using simulated models of predation, and to evaluate the effects of river flow and water temperature on smolt survival through the Delta. Their findings revealed that survival was highly variable, but also supported the assertions of previous studies that smolt survival drops to nearly 0% by the time water temperatures reach 20˚C (68˚F). The decline in survival corresponds with decreased swimming capacity at this temperature, as slower swimming speeds lead to higher predation mortality. Further, data from PERs showed that smolts faced a higher near-shore predation risk from largemouth bass as temperatures warmed, whereas striped bass attack rates remained constant across low and high temperatures. Modeling of river inflow and temperature also indicated that increased flows affect the number of days that a smolt can safely transit the Delta in a given year, particularly in years when flows are very low.

The simulations predicted a smaller impact of largemouth bass predation than anticipated – only about half that of striped bass – but suggested an interesting potential combined effect of these predators that occupy different habitats, with largemouth in more nearshore habitats and striped bass in more open water. Increasing submerged aquatic vegetation in the Delta has led to a significant increase in largemouth bass numbers over the past three decades, and studies have found largemouth bass at very high densities in the Delta. This could mean that young Chinook moving along the vegetated margin of the river may encounter these predators almost constantly, which in turn may cause smolts to preferentially move to the middle of the river. This movement to open water may put smolts at greater risk by increasing their encounters with striped bass, which appear to target Chinook smolts more often than largemouth bass do. As climate change continues to warm rivers sooner and constrict the timeframe for Chinook to complete the freshwater components of their life cycles, restoration efforts may have to focus on maximizing their chances of surviving a shorter freshwater rearing phase. To this end, managers will have to find ways to address predation, such as reducing habitats that heavily favor invasive predators. Studies like this one help shed light on the intricacies of complex predator-prey relationships that will continue to evolve as temperatures warm.