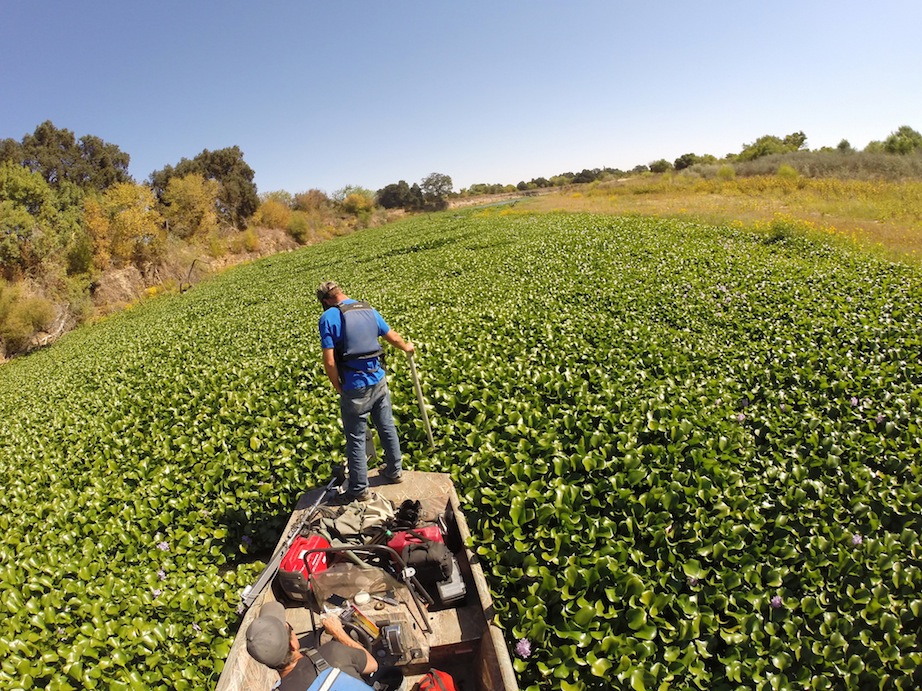 In 1884, the visiting Japanese delegation to the World’s Fair in New Orleans handed out a seemingly innocuous gift to fair attendees. This gift, a beautiful flowering aquatic plant native to South America, was brought home to Florida by a Mrs. W.F. Fuller, who wanted to decorate her backyard fishpond. The plant began to multiply and soon choked the water of her small pond. When she thinned out the plants, a few of them made it into the water at her boat ramp on the nearby St. Johns River. Within a few years, the entire river was covered in a vast floating mat of vegetation so thick that boats could no longer navigate on the river. The plant, water hyacinth (Eichornia crassipes), would turn out to be a scourge in America, as it has come to clog waterways and irrigation canals across the country, blocking sunlight and wringing precious oxygen and nutrients from the water. Brought to California in 1904, it was released by an aquatic plant enthusiast into the Sacramento River, and continues to cause massive problems to this day (see Green Tunnels of Invasive Weeds).

Due to ongoing drought conditions and resulting warm water temperatures, the outbreak of water hyacinth in 2014 is among the worst that California has ever seen. The weed has so choked waterways that it is considered a safety hazard, blocking access to marinas and prompting the cancellation of Stockton’s lighted boat parade. Since the Central Valley is perhaps the only place in the world where water hyacinth and Chinook salmon exist together, very little is known about what effect the aquatic plant has on salmon migrations. To investigate this issue, FISHBIO staff recently spent several evenings in the field deploying our ARIS camera directly below some large rafts of hyacinth in Central Valley rivers to try and capture footage of salmon behavior as they encounter this floating plant. We chose to use the ARIS for this exploratory survey because it is a non-intrusive sampling method that does not alter fish behavior, while also providing near-video-quality imagery in the dark conditions under the dense blankets of hyacinth. The ARIS also allowed us to film at night, when the majority of salmon migration activity tends to take place.

While we were able to obtain some good quality footage of large fish encountering these floating mats, more work is needed before we can draw conclusions. One challenge we experienced is low salmon escapement numbers, meaning there were few fish for us to observe. For example, the Tuolumne River has witnessed a nearly 90 percent reduction in the numbers of returning salmon compared to last year. In places where we expected to see large schools of fish moving through the river, we had a hard time seeing much of anything except carp and Sacramento sucker. It’s likely the large rafts of water hyacinth are having a negative effect on salmon migration, although the unusual environmental conditions that have caused prolific growth of the plant could also contribute to reduced salmon escapement.

Hyacinth not only creates environmental headaches, it’s also an expensive nuisance. California’s Department of Boating and Waterways (DBW) spends an estimated $6.5 million every year battling destructive, invasive weeds, including hyacinth. Since there is no known eradication method, this money goes only to attempts to ‘control’ the species, usually by spraying or mechanical removal. However, each of these methods has its drawbacks. Mechanical removal is extremely costly, as the plant exhibits prolific growth (89 Tons/acre/year) and requires specialized equipment for removal. The most common method of control is chemical treatment, usually with the herbicides glyphosate (Roundup) or 2,4-D (one half of the mixture that made up Agent Orange, a defoliant used in the Vietnam War); however, both of these herbicides can only be sprayed during certain times of year due to water quality concerns. Other novel approaches have been discussed, ranging from the intuitive (Amazonian weevils, moths, and fungal pathogens) to the bizarre (hippos, capybaras, and manatees). While we continue to monitor this situation one thing has become painfully clear: hyacinth is an issue that is not going away anytime soon.