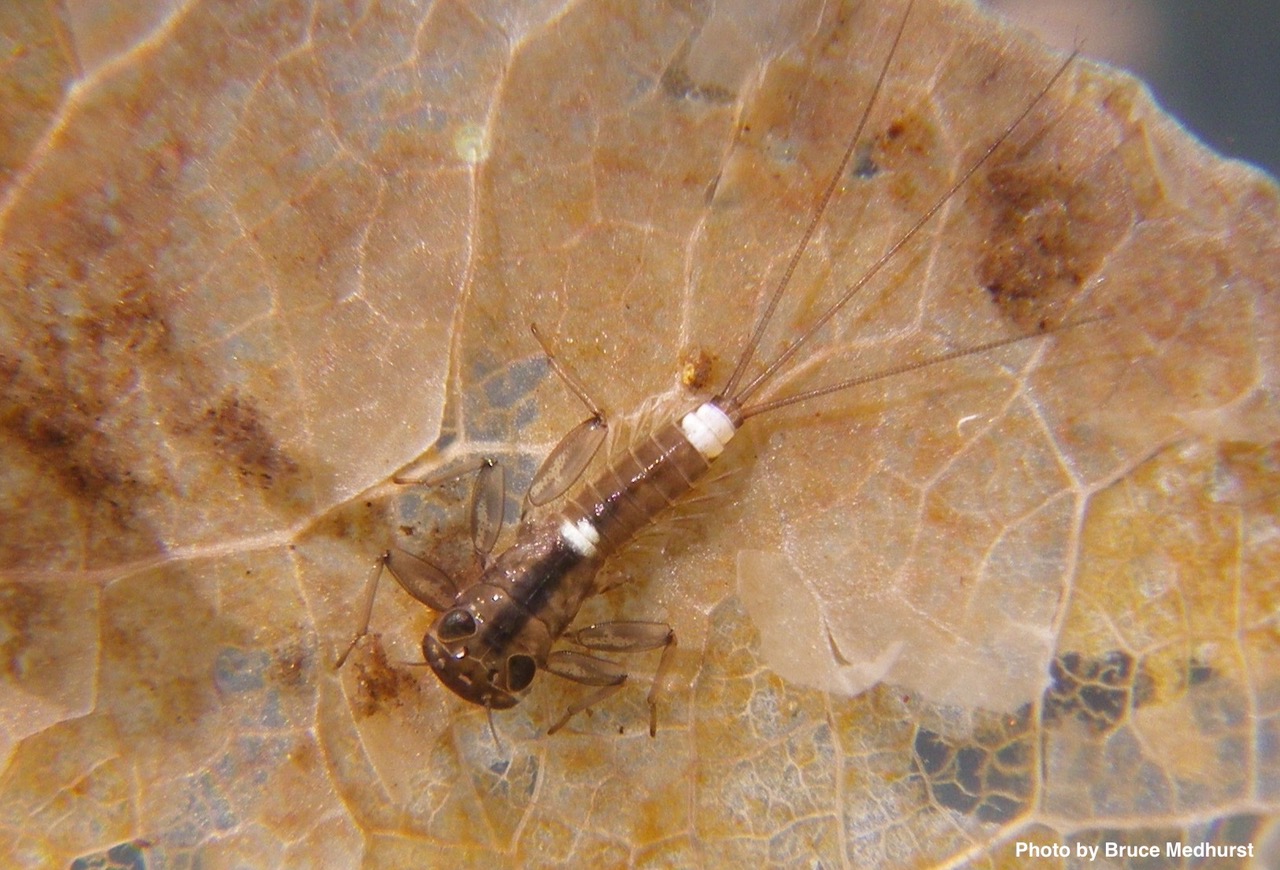 Small headwater streams at high elevations may be mostly inaccessible to fish, but they still teem with aquatic life. Benthic macroinvertebrates, including insect larvae, worms, snails, and other backbone-lacking creatures, often rule the alpine waterways. These organisms are a significant source of food in the upper watershed as well as in downstream reaches. However, their high-altitude homes put them on the front lines of climate change, which threatens to have major impacts on mountain streams. This is particularly true of streams in the Sierra Nevada of California, where the Mediterranean climate already brings seasonally dry conditions. Climate models developed for the Sierra Nevada predict changes to the seasonal timing of stream flows, prolonged periods of low flow, and a smaller snowpack. Understanding how invertebrate communities will respond to such changes is important for making predictions about the future of stream ecosystems. For this reason, researchers from the University of California and the U.S. Forest Service undertook a 14-year study of invertebrate communities in Sierra Nevada streams over varying hydrologic conditions (Herbst et al. 2019). This study published in the journal Freshwater Biology included periods of prolonged drought, which allowed the scientists to infer how stream invertebrates might fare in the face of increasingly frequent droughts due to climate change – and the prognosis isn’t great. 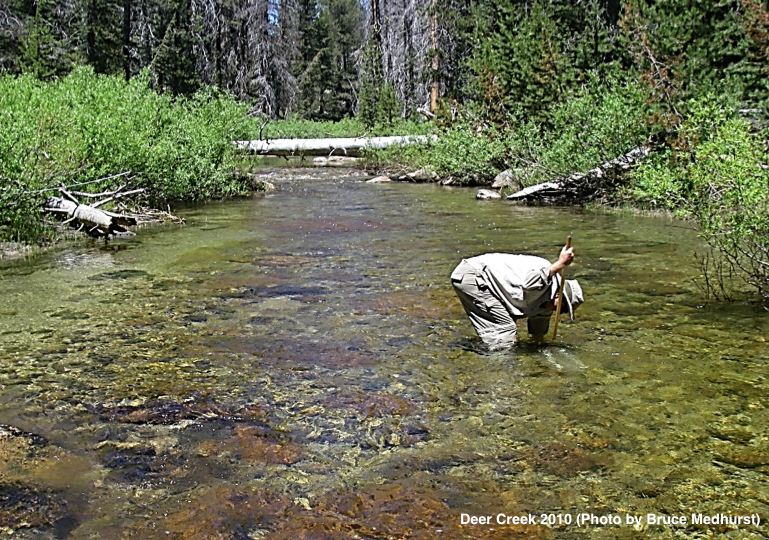 The study focused on 12 small streams that flow into the North Fork of the Kings River and into Pine Flat Reservoir, all of which are located within either the Kings River Experimental Watershed or the Teakettle Experimental Forest outside of Fresno, California. These protected areas in undeveloped national forest lands provide a reference condition for undisturbed mountain streams in California. The team collected seasonal samples at the streams over the course of 2002 to 2015. Habitats for each study reach were classified as riffles (shallow flowing sections), pools (deep sections with little or no flow), or transitional zones. The team collected environmental data such as flow, depth, and water temperature at each site, and used a net to sample for invertebrates in the stream. Collected invertebrates were identified and assigned different traits relating to their temperature tolerance, body size, behavioral habits, style of feeding, and voltinism (or generation time) based on existing knowledge of the species present. In addition, it was noted whether the species typically used riffle, pool, or mixed habitats, based on earlier studies of the same sites. 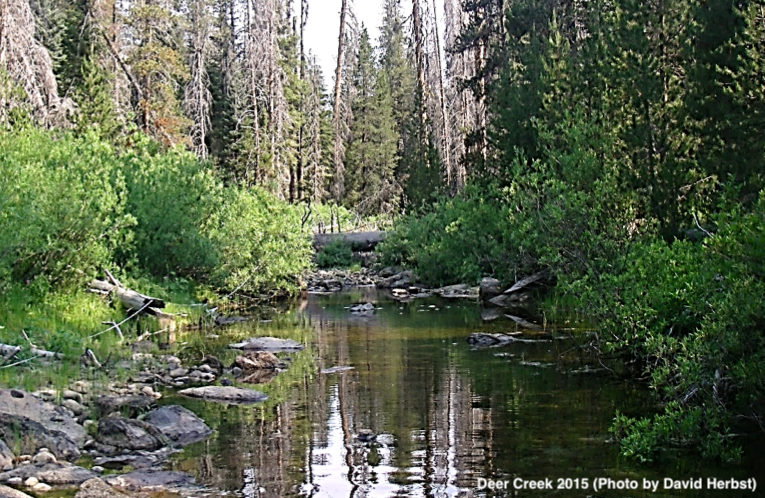 Analysis of habitat data revealed that as severe drought progressed over the course of multiple years, streams became more fragmented. Early in the drought in 2013, three of the study sites were intermittent (meaning they had no flow at some point), and by late in the drought in 2015, six were intermittent As another example, the above photos were taken at the same location on Deer Creek. This is noteworthy, as the streams in this study area usually have year-round flow. The biological data revealed that the most significant changes to invertebrate communities took place in these intermittent reaches. The total density of invertebrates increased at the beginning of droughts, as all species were forced into smaller, fragmented habitats, but this increase was mostly caused by groups known to be tolerant of poor habitat conditions. Groups of insects strongly associated with healthy, flowing stream ecosystems, namely Ephemeroptera (mayflies), Plecoptera (stoneflies), and Trichoptera (caddisflies), or EPT taxa, were found to decrease over the course of a drought. In fact, toward the end of extended droughts, 40% of EPT taxa were in decline. As flows and depths decreased, temperatures increased, decomposing organic matter accumulated, and the rocks on the river bottom became more embedded in sediments. At the same time, the more sensitive invertebrate species dwindled, especially those adapted to the flowing riffle habitats that were the first to dry up. In turn, more tolerant, generalist species came to dominate the drought-stricken systems. This also affected the food webs of the streams, as droughts led to fewer invertebrates that feed by filtering, grazing, or shredding organic matter, and large, long-lived insects that are a preferred food were hit especially hard. 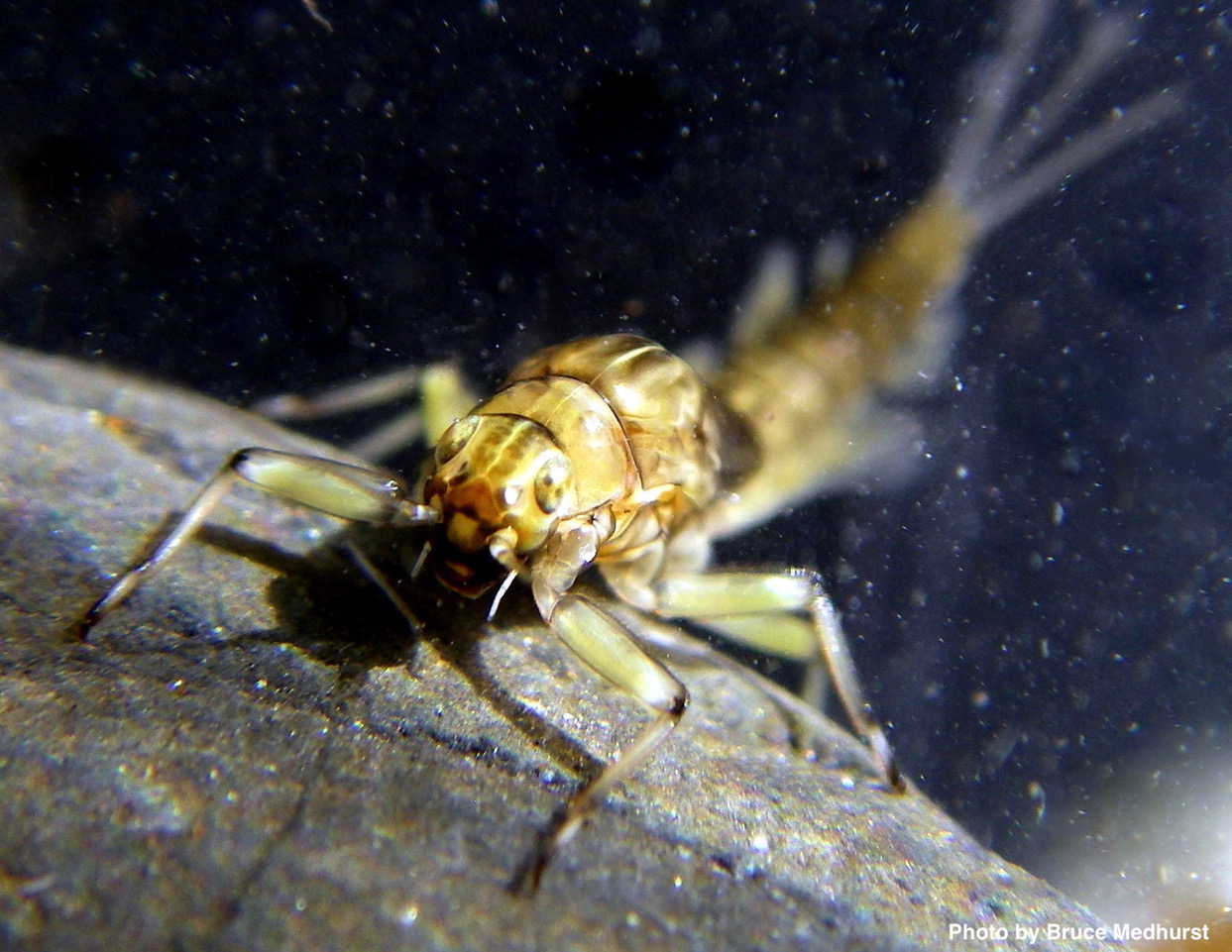 The aquatic inhabitants of mountain streams are adapted to seasonal fluctuations in flow, but changes to these patterns as a result of climate change may be too much for these bugs to take, which could have big implications for stream ecosystems. Droughts may lead to simplification of complex stream food webs, and eliminate species that process organic matter and serve as food for larger predators. This and other studies suggest that fewer species of invertebrates are able to persist in intermittent streams, and climate change is likely to result in longer, more severe droughts that will turn formerly perennial streams into fragmented waterways. Mountain streams will be among the first to experience severe effects of climate change, so understanding how their invertebrate communities are affected will help scientists and managers in other stream ecosystems predict and prepare for future changes.

For inquiries about this study, please contact David Herbst (dherbst@ucsc.edu). This post featured in our weekly e-newsletter, the Fish Report. You can subscribe to the Fish Report here.