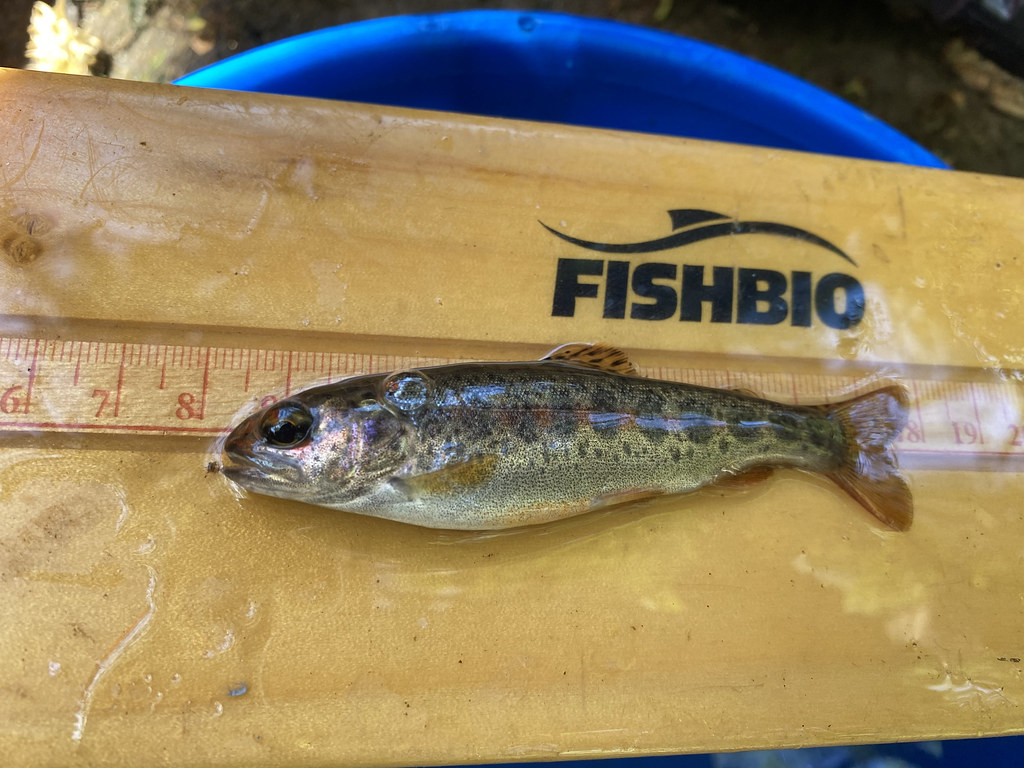 One challenge of conserving freshwater migratory fish such as salmonids is the diversity of their survival strategies. Some populations are made up of a mix of riverine residents, which spend their whole lives in freshwater, and anadromous migrants, which spend most of their lives at sea and return to rivers to spawn. Among such species, the migratory form is often afforded some protection by law while the resident remains unprotected. This is the case with steelhead and their resident counterparts rainbow trout (Oncorhynchus mykiss) in California. We’ve written before about the many factors that determine whether an O. mykiss will migrate or not, and how their complex ecology makes their partially migratory populations difficult to manage. However, a study in the Canadian Journal of Fisheries and Aquatic Sciences has shown that analyzing two of these factors in combination – sex and genetics – allowed scientists to estimate what proportion of an O. mykiss population is migratory (Kelson et al. 2019). Although the analysis does not provide a perfect prediction of whether an individual will migrate or not, it is a promising approach that highlights the importance of conserving both residents and migrants.

In several salmonid species, including O. mykiss, migratory populations in some locations are mostly female. This occurs because the amount of eggs a female can produce increases with body size, and females that migrate to the ocean grow to larger sizes than those who remain in freshwater, granting them an advantage. Although size may matter for females, this isn’t the case with males, who can successfully reproduce even at small sizes. As a result, mostly male resident O. mykiss populations have also been detected. In addition to these sex-based trends in migration and residency, several genes have been found to be associated with O. mykiss migration. Among these is a region of the O. mykiss genome on chromosome five (Omy5). By using sex and the Omy5 genotype, the authors of this study sought to predict migration at the individual level.

Juvenile fish were collected from two tributaries of the South Fork Eel River in northern California. After measuring length and collecting a tissue sample for genetic analysis, the fish were implanted with PIT tags so that downstream antennas would detect them during out-migration. Based on genetic analysis, each fish was assigned one of three genotypes: resident, migrant, or heterozygous (meaning it had one copy of the resident gene and once copy of the migrant gene). This data was combined with information on the sex of the individual, and data on movement. In this way, each fish was assigned a genotype, a sex, and an ecotype (whether it was migratory or resident). The researchers modeled the relationship between these factors, and they also obtained two estimates of the migratory proportion of the population based on sex-ratios and genotypes, respectively.

The overall genotype frequency of juvenile O. mykiss in the population was 29.6% migratory, 40.2% heterozygous, and 30.2% resident. However, the observed proportions of migrant and resident fish did not perfectly correspond with these ratios. In fact, the scientists found that 30% of out-migrating juveniles actually had the resident genotype. Those fish with migratory genotypes, on the other hand, were far less likely to remain in the river, representing only 6.3% of resident fish. Migration also appeared to be sex-biased, as 77.6% of residents were male and 61.9% of migratory fish were female. In short, migratory fish were composed of individuals of all three genotypes but were more often female. Overall, the migratory proportion of the population was estimated to be 69.9% or 88.3%, based on sex-ratio data and genotype data, respectively.

This study shows that genetic sex and genotype can be combined to create a useful tool for estimating the proportion of migratory and resident ecotypes in an O. mykiss population. However, the models created only explained about 45% of the variation in life-history diversity. This is likely because environmental conditions or variation in other, unassessed genes also play a part in determining whether fish will stay in the river or migrate to the ocean. In spite of the remaining unknowns, this study verified that even individuals with resident genotypes are still important contributors to the migratory population. As such, even unprotected resident populations are important to consider in efforts to conserve steelhead.