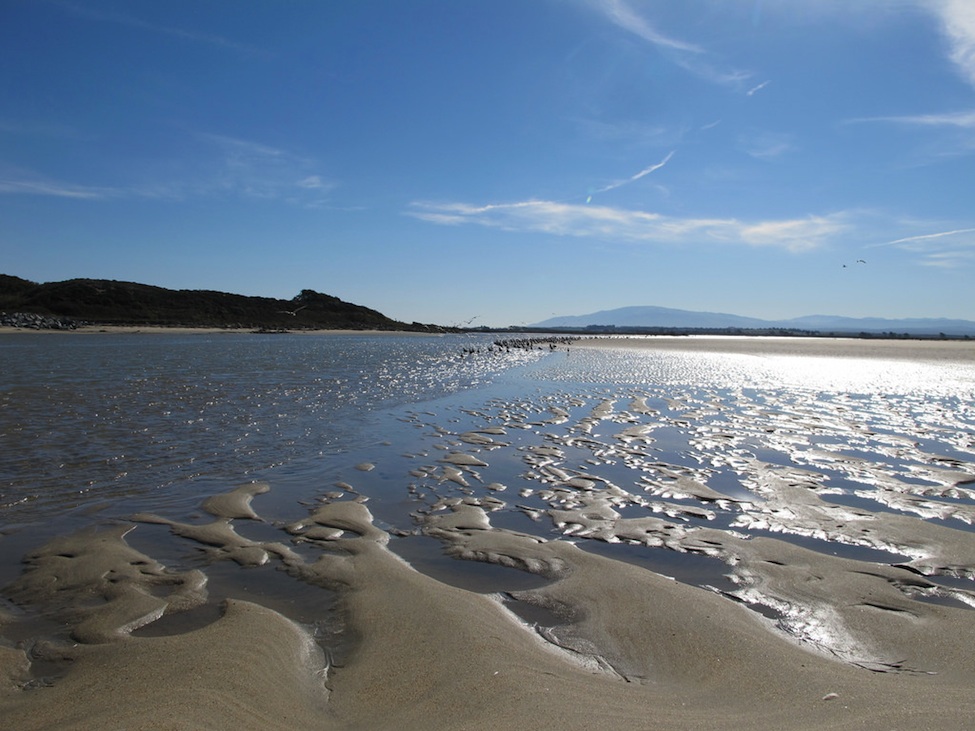 Children of the ‘80s may have fantasized about the tropical adventure in the film “The Blue Lagoon,” but for many biologists, lagoons are fascinating even without the help of Hollywood. Lagoons are special habitats that can develop at estuaries, where rivers, oceans, and land meet. In Mediterranean climates such as California, a lagoon is essentially an estuary plus a sandbar, which form at the mouth of estuaries in California during dry seasons and droughts as sand moves through the combined forces of ocean currents, waves, and river flows. When a sandbar forms, the river is cut off from the ocean, triggering a cascade of profound physical and chemical changes. An intermittent estuary (or periodic lagoon) shifts between two states: an open estuary connected to the ocean, and a temporarily closed coastal lagoon. When the lagoon is closed, the amount of aquatic habitat generally increases, but water quality also declines, sometimes to lethal levels (Whitfield 1995, Richards and Pallud 2016). The shifting state of intermittent estuaries poses unique challenges to fishes, and can lead to some remarkable adaptations, such as in the case of steelhead (Oncorhynchus mykiss).

Over the past decade, intermittent estuaries in northern California have received some well-deserved attention thanks to studies performed by the National Marine Fisheries Service’s Southwest Fisheries Science Center. This work demonstrates the importance of Santa Cruz County’s Scott Creek estuary as a summertime nursery habitat for steelhead (Bond et al. 2008, Hayes et al. 2008, Sogard et al. 2012). Although fish can grow much faster in the intermittent estuary, predation there can also be high, which is why experts have described the lagoon as “high-risk, high-reward” habitat for juvenile steelhead (Satterthwaite et al. 2012). Very early Pacific salmonid research was performed from 1933–1942 in the Waddell Creek watershed and intermittent estuary just six miles up the coast from Scott Creek (Shapovalov and Taft 1954). The scientists discovered that different age groups of steelhead migrated downstream at different times of year, older fish moved towards the estuary earlier than younger fish, and some steelhead moved back upstream during the fall and winter (Figure 1).

More recently, Hayes et al. (2011) expanded on this research using tools like instream Passive Integrated Transponder (PIT) antennas to track migration of individual steelhead at Scott Creek. The researchers found that the fish moving back upstream are demonstrating a “double smolting” life history strategy, which was expressed in response to sandbar formation. They noted the steelhead that moved downstream during the wet months of February and March entered the ocean right away, whereas those migrating during the drier months of April to June moved to the estuary at smaller sizes and remained there for an extended rearing period. When water quality deteriorated in the closed estuary in the fall, this triggered many of the spring recruits to migrate back upstream, where they waited until the following spring to then quickly dart to the ocean. Unlike fish that migrated straight into the ocean, these double smolting steelhead entered the ocean at a larger size, much better suited to evade marine predators, because they spent a summer in the estuary where summertime growth rates can be 20-80 times greater than in the upper watershed (Hayes et al. 2008).

Steelhead exhibit a particularly variable life history, which becomes even more interesting in the extremely dynamic environments of intermittent estuaries. In California, steelhead express different life history strategies that help them cope with environmental challenges and exploit the vital growth opportunities provided by estuaries. From a conservation perspective, it is critical to maintain this life history diversity because it boosts population resilience (Hilborn et al. 2003), which helps to achieve the ultimate goal of all coastal steelhead recovery efforts: self-sustaining populations. And it turns out lagoons aren’t just steamy Hollywood backdrops – they play an important role in helping these iconic California fish grow and thrive. 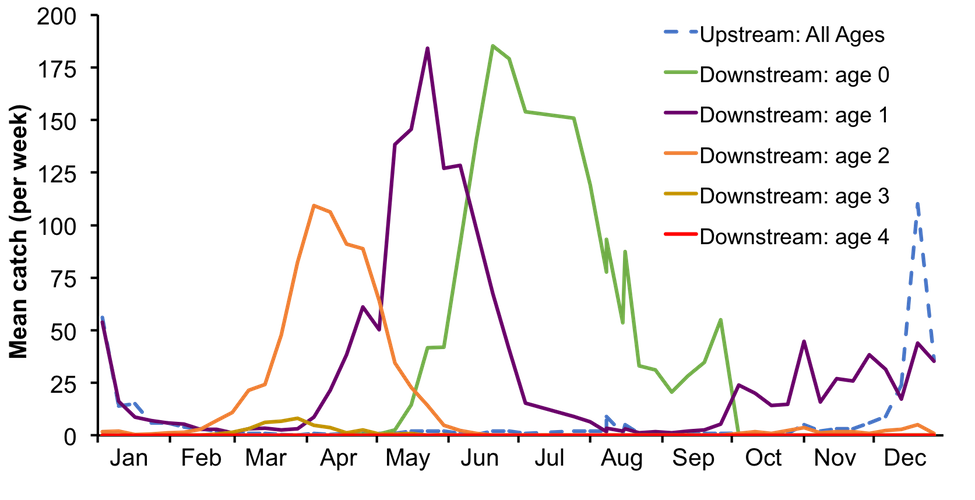 Figure 1. Mean weekly catches of juvenile steelhead trout captured at a two-way trap located approximately 1 mile upstream of the Waddell Creek intermittent estuary. Data are redrawn from tables 40-44 & 47 of Shapovalov and Taft (1954) and represent annual mean values for the 10-year period from 1933-1942.