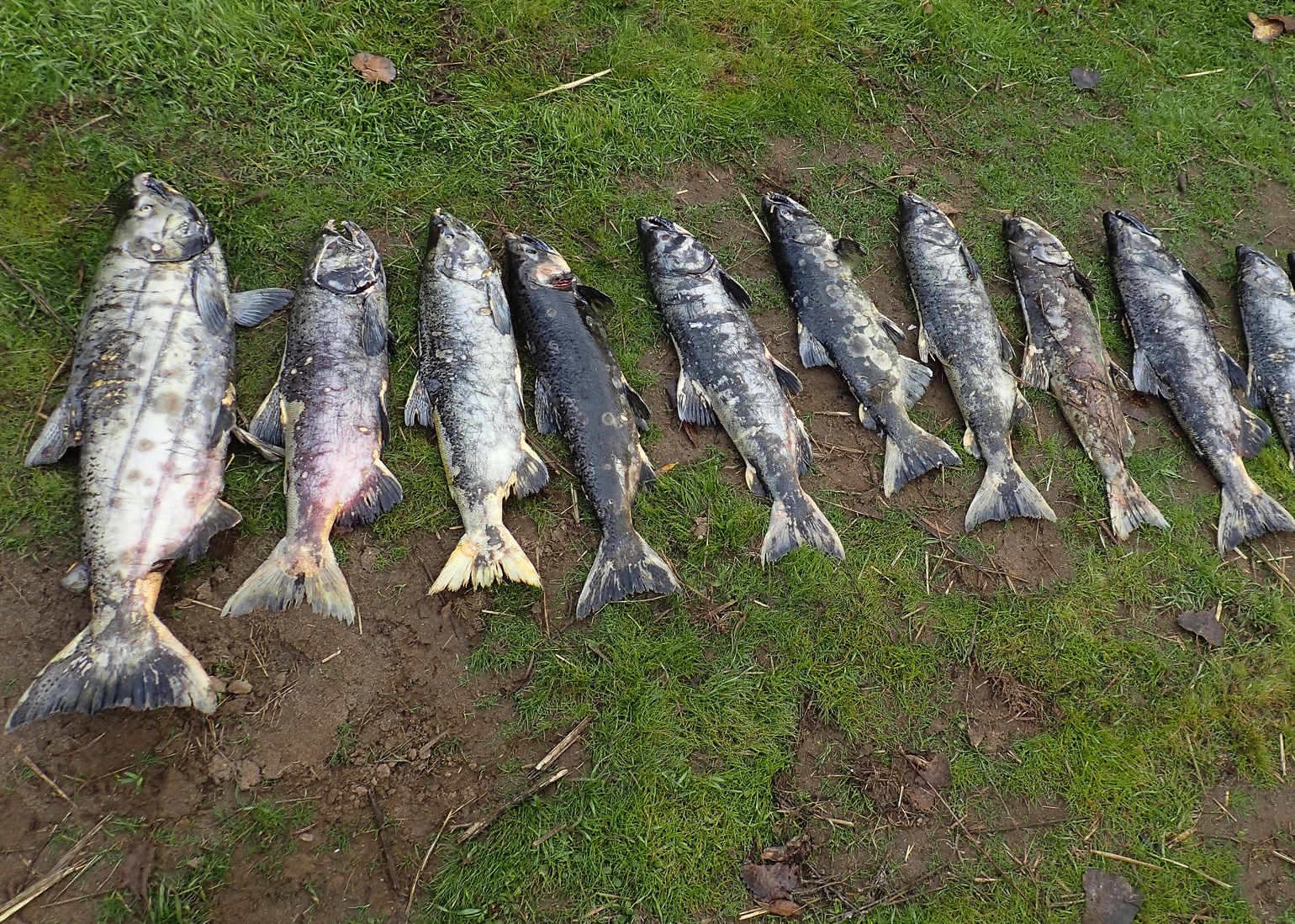 Imagine trekking a thousand miles away from your birthplace as a child, then navigating back home for the first time as an adult using only your senses. Salmon are famous for doing just that when they leave the ocean to return to the very streams where they were born to lay their eggs. This impressive homing ability is believed to result from juvenile fish imprinting on stream odors when their smolting hormones spike during downstream migrations to the ocean. Adult fish subsequently recognize these olfactory cues when migrating upriver to spawn (reviewed by Dittman and Quinn 1996, Westley et al. 2013). Homing increases the likelihood that adult salmon will return to a hospitable environment and find food, shelter, mates, and adequate spawning conditions (Papi 1992). However, changes in hatchery practices in California have disrupted the ability of some salmon to find their way home, resulting in thousands of fish wandering into the wrong streams, with consequences for population genetic diversity, fitness, and productivity.

The majority of the commercial salmon catch in California is composed of fall run Chinook salmon propagated at Central Valley hatcheries (Barnett-Johnson et al. 2007, Kormos et al. 2012, Palmer-Zwahlen and Kormos 2013, Palmer-Zwahlen and Kormos 2015). Without hatchery supplementation, there likely would not be a commercial salmon fishery in the state. However, when baby salmon are released away from their hatchery, they are more prone to straying, or returning to spawn in a river other than the one where they were born, and this comes at a cost for wild salmon populations. Since the 1980s, juvenile Chinook salmon from Central Valley hatcheries have been trucked closer to the ocean to be released off-site, and have also been released in larger numbers over time (Huber and Carlson 2015). The majority of these young hatchery fish are currently released en masse in the San Francisco Estuary near Carquinez Straight in order to boost their survival rates: the goal is to satiate predators, such as striped bass, by releasing so many fish at once, and also limit the fish’s exposure to water diversions, predators, and harmful water quality in Central Valley rivers and the Sacramento-San Joaquin River Delta. Increased survival of these hatchery salmon has resulted in higher contributions of hatchery fish to California’s commercial and recreational fisheries overall (JHRC 2001).

When juvenile fish travel in a truck as opposed to swimming in the rivers, they don’t imprint on olfactory cues that will later lead them home. This has promoted artificially inflated rates of adult straying: instead of the majority returning to the hatchery, trucked hatchery fish are also likely to return to other rivers as adults. While wild salmon and hatchery salmon released at the hatchery are expected to stray about 1-10 percent of the time (or less), trucked California salmon routinely exhibit straying rates of approximately 50-90 percent (Sholes and Hallock 1979, JHRC 2001, Hendry and Stearns 2004, Kormos et al. 2012, Palmer-Zwahlen and Kormos 2013, Palmer-Zwahlen and Kormos 2015). Scientists have also found that the farther fish are trucked from hatcheries, the higher their rate of straying. For example, fall run Chinook salmon released from the Feather River Hatchery and the Coleman National Fish Hatchery on Battle Creek, a tributary of the Sacramento River, exhibit an approximate 0.27 percent increase in their rate of straying for each river mile trucked downstream (see Figure 1). 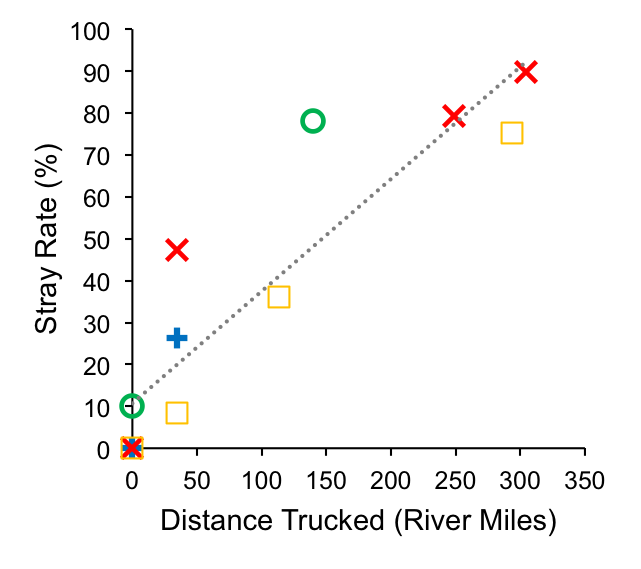 High straying rates are incompatible with the objective of promoting diverse Central Valley salmon populations, each with unique adaptations to local environments. The Central Valley fall run Chinook stock complex is now genetically homogenized (Banks et al. 2000, Williamson and May 2005), which is remarkable for such a vast geographic area (JHRC 2001) and is due, in part, to off-site hatchery release practices that have promoted straying (Garza et al. 2008). Genetic changes caused by artificial selection in hatcheries can be rapid (Araki et al. 2007a, Christie et al. 2016), and conservationists are concerned that hatchery strays will interbreed with naturally hatched fish and reduce the genetic diversity of wild populations (JHRC 2001, Araki et al. et al. 2007b). For example, hatchery strays outnumbered wild fish at spawning grounds on the Stanislaus River (where no hatchery exists) by 340% from 2010-2012 (Kormos et al. 2012, Palmer-Zwahlen and Kormos 2013, Palmer-Zwahlen and Kormos 2015). Reduced genetic diversity makes the remaining wild stocks less productive (reviewed by JHRC 2001) and more vulnerable to future environmental change (Chapin III et al. 2000). Hatchery managers are also concerned that they won’t be able to collect enough eggs to propagate if too many fish stray away from hatcheries (JHRC 2001). Wild salmon, as we know them today, have been successfully finding their way home for approximately 18 million years (Augerot 2005). Producing masses of directionally challenged hatchery fish by releasing them far from home is a threat to wild stocks, and essentially trades short-term gains for long-term losses.