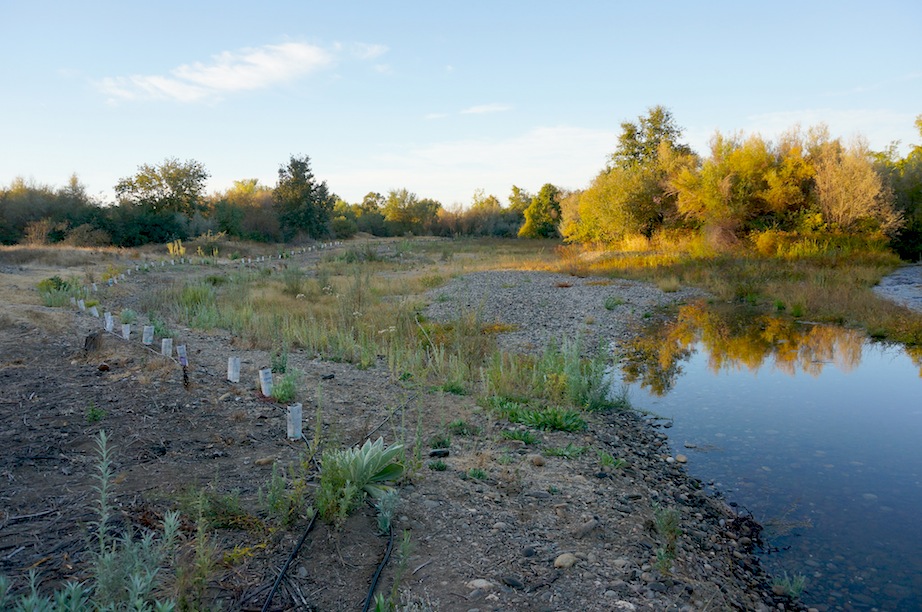 Sometimes river habitats need a helping hand to alleviate critical bottlenecks that reduce fish survival and limit the size of fish populations. Well-designed habitat restoration projects that draw on research to help fish can provide a significant boost to fish abundance and survival (Bonneville Power Administration 2014). Now, one such restoration project comes to life in our new video: Replenishing a River: Stanislaus River Honolulu Bar Restoration. The project, funded in large part by the Oakdale Irrigation District (OID), created vital habitat to improve the numbers of young salmon and steelhead rearing on the Stanislaus River in California’s Central Valley. The video chronicles the transformation of a two-and-a-half acre region of the river called Honolulu Bar, and discusses OID’s commitment to stewardship and giving back to the Stanislaus River.

The Honolulu Bar project represents a collaboration between Oakdale Irrigation District (OID), the U.S. Fish and Wildlife Service, CBEC, River Partners, and FISHBIO. We were able to draw on 20 years of Stanislaus River fisheries monitoring data funded by OID to design a habitat we were confident would meet the needs of fish. The ambitious project addressed many challenging features that made the site less than ideal for fish, due to decades of human alteration to the river. Honolulu Bar’s in-stream island lacked the slow-moving, shallow water floodplain habitat that young fish need to rear and grow. With the help of heavy machinery, we dug down the elevation of the island, allowing water to flood over it at a broad range of river flows. We then took the gravel removed from the island and selected rocks of a specific size to create better quality habitat for salmon to spawn.

Project partners also removed the nonnative plants that had completely overgrown the area, and planted native vegetation like cottonwoods, willows, and box elders, which shade the river and support the growth of insects that eventually become fish food. Completed in 2012, the project resulted in improved habitat that benefits fish throughout multiple stages of their life cycle, with more space for adult fish to spawn and for young fish to rear. As soon as the project was completed, we began monitoring the site, and observed fish using the habitat almost immediately. This project proved a true success, as FISHBIO Principal Andrea Fuller recently shared at the Bay Delta Science Conference.

Although we’ve written extensively about Honolulu Bar on our blog, there’s nothing quite as satisfying as watching the effort unfold. In the new video, we weave together interviews with OID and FISHBIO staff along with footage we collected throughout the project to tell the story of a successful restoration. Come explore the restoration site and watch its transformation from an inhospitable and overgrown pile of gravel into a welcoming floodplain habitat. You can find photos of the restoration project on our Flickr page, and stay tuned to our YouTube channel to find more FISHBIO Films. We hope the video will help communicate the success of this project to encourage similar fish habitat restorations throughout California’s Central Valley.

So what makes Honolulu Bar “the perfect Disneyland” for fish? Watch the video to find out!