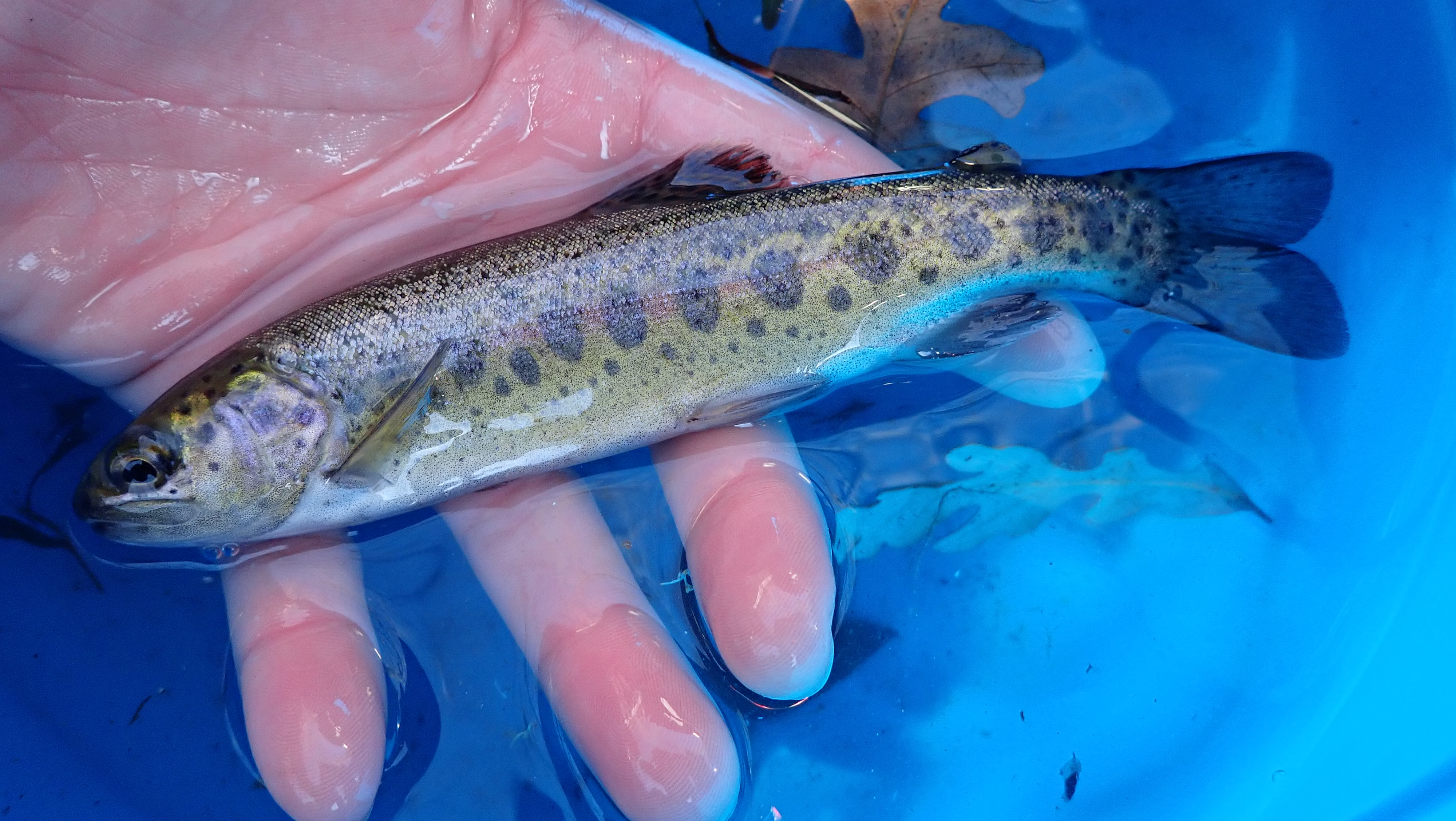 It’s been over 150 years since the rivers in Yosemite National Park flowed freely to the ocean without interruption by dams and reservoirs. Historically, steelhead (Oncorhynchus mykiss), the ocean-run form of rainbow trout) would have journeyed from the ocean to the snowmelt-fed upper reaches of the Tuolumne and Merced rivers to spawn, and then made their way back downstream, unimpeded by man-made barriers. More than 30 steelhead generations have passed since that time (one generation is about five years), and obviously no fish living today has any memory of dam-free trips to sea.  But, as a study by researchers from the National Marine Fisheries Service and UC Santa Cruz revealed, even after a century and a half, the ocean-run legacy of Yosemite’s rainbow trout lives on in their DNA (Pearse and Campbell 2018).

The intriguing history of trout in Yosemite has been heavily influenced by the activities of humans. It’s believed that settlers began moving locally captured O. mykiss above waterfalls into previously fishless areas in the 1870s, and by 1895, a fish hatchery was operating on the South Fork Merced River. This hatchery and the others that followed propagated both O. mykiss indigenous to the area as well as strains imported from elsewhere in California. Today, most rainbows stocked in California are triploid, meaning they are sterile and cannot contribute their genes to the population, but this wasn’t the case until 2013. Over the course of many years of stocking, Yosemite became a melting-pot of trout, and recently molecular tools have provided scientists the opportunity to sort through the genetics of the populations that exist in the area today. Their DNA not only provides insight into the relative contributions of different ancestral populations (such as hatchery strains and fish native to the area), but also contains information on whether these populations have retained the traces of the steelhead life history despite their isolation from the ocean. As it turns out, this migratory ability can persist even in above-dam populations, where the presence of a reservoir can allow for an “adfluvial” life history, in which trout undergo a miniature ocean-run migration by moving from stream to lake and back again.

The study of Yosemite trout revealed that, remarkably, the majority of populations have primarily native ancestry despite the extensive stocking of hatchery trout in the area. Unlike the O. mykiss of San Francisco Bay, it does appear indigenous Yosemite trout have a history of interbreeding with hatchery-raised individuals, but there has not been the complete replacement of native genetics like that observed in other heavily stocked regions of California. Even better news is that many of the above-dam populations exhibited genetic markers on the Omy5 chromosome that are associated with anadromy (e.g., migration to and from the ocean). This finding has conservation implications because it means that these rainbow trout populations have retained the ability to migrate, and therefore reconnecting O. mykiss above barriers with their downstream relatives could potentially help bolster the diversity of steelhead populations.

We’ve written before about the numerous factors that determine whether a fish will remain in rivers as a rainbow trout or travel to the ocean as a steelhead, and historically O. mykiss populations throughout Central California would have existed as a mosaic of residents and ocean-run individuals. The steelhead in the Tuolumne and Merced rivers belong to the Central Valley Distinct Population Segment (CV DPS), which is listed as threatened under the Endangered Species Act (ESA). Despite being the same species, rainbow trout in these same rivers are not afforded protection under the ESA. However, even providing legal protection for rainbow trout would not single-handedly solve the problems faced by California’s O. mykiss. One of the main drivers of Central Valley steelhead imperilment is the loss of 80% of their historical spawning area due to dam construction. Although offering Yosemite trout the opportunity to reach the ocean may help bolster steelhead populations, this would only be truly beneficial if more habitat for all O. mykiss life stages is made available through restoration efforts. Fisheries conservation is ever a multi-faceted and complicated effort, but the spirit of seafaring adventure that lives on in the DNA of Yosemite’s rainbow trout may prove a valuable tool to help recover the species.