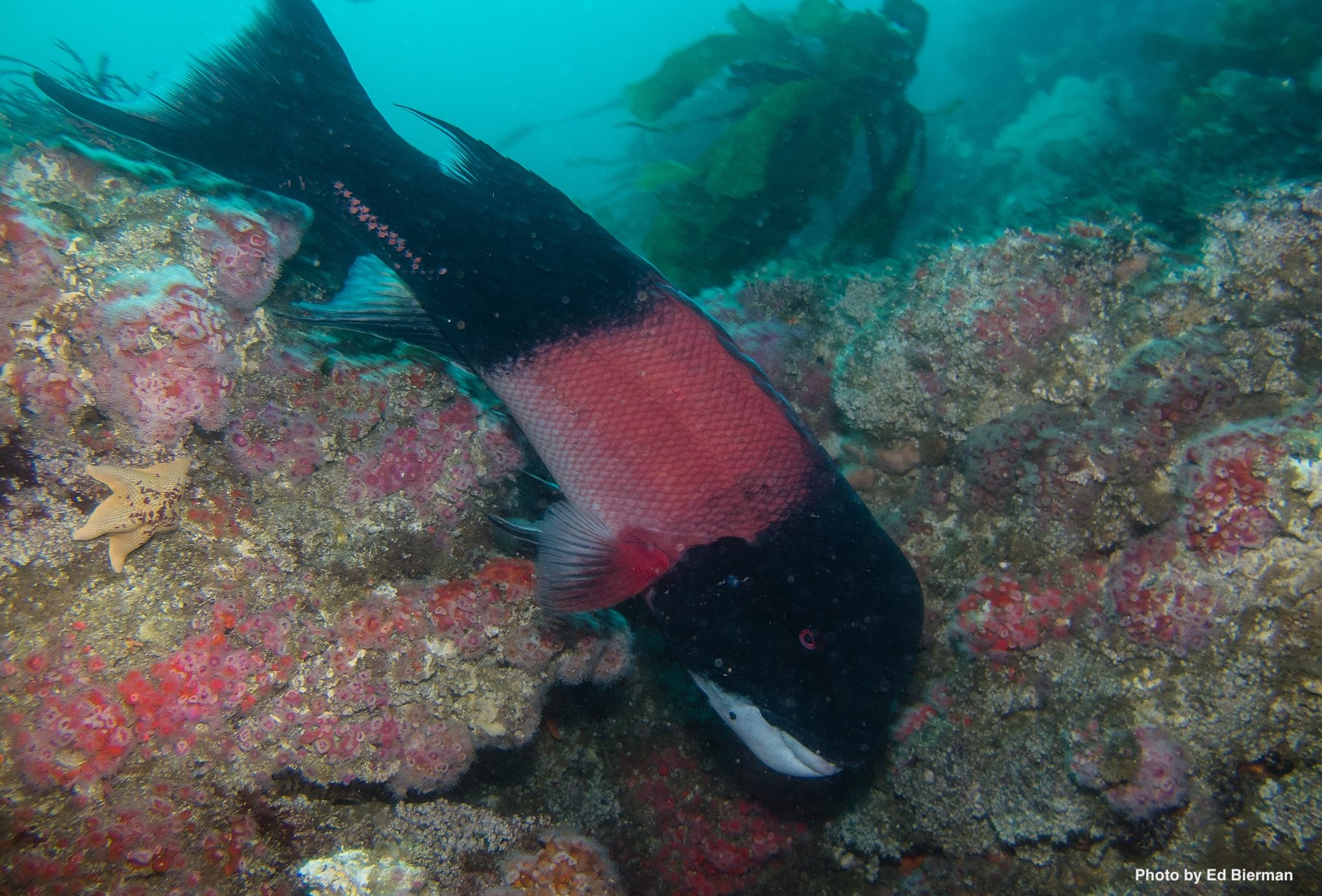 In ocean food webs, many organisms directly and indirectly rely on each other to bring balance to the surrounding environment. Food webs in ecosystems like kelp forests can sometimes experience trophic cascades, in which three or more levels of the food chain are connected by predators, and changes in one level can cascade down to affect other levels. When carnivorous predators tend to selectively eat herbivores, this allows plants (which would otherwise be grazed by herbivores) to grow abundantly (Strauss 1991, Menge 1995). However, overfishing of top-predators can create an imbalance in the food web, and their prey species can dramatically increase in number, with potentially serious consequences to the ecosystem

One well-known trophic cascade on the Pacific coast is the relationship between the California sheephead fish (Semicossyphus pulcher), sea urchins, and kelp. Population explosions of two species of urchins, the red (Strongylocentrotus franciscanus) and purple (S. purpuratus) sea urchins, and the accompanying degradation of kelp forests were recorded along the coasts of southern California dating back to the 1960s (North and Pearse 1970). Urchins feed voraciously on kelp, sometimes cutting the seaweed at its base, and can fell entire kelp forests. This creates urchin barrens, or areas of the subtidal ocean where populations of urchins have grown immensely and made it impossible for kelp forests to grow. As a carnivore, the California sheephead plays a key role in the kelp forest because of its ability to consume large quantities of sea urchins and other invertebrate prey. Experimentally removing sheephead resulted in a 26 percent increase in sea urchin population size, and an increase in urchins occupying exposed sites (Cowen et al. 1983). Researchers have found that overfishing the sheephead contributes to a trophic cascade within the kelp forest community by permitting urchins to devastate kelp forests.

California sheephead are sequential hermaphrodites, which means they are born female, and later turn male as they become older, larger, and more able to protect their territories.  Sportfishing tends to target the larger, “trophy” fish, which means removing mostly male sheephead from the population.  This can then cause a sex change among the remaining females, resulting in smaller male sheephead while causing females to lower their reproductive output, or lay fewer eggs (Hamilton 2013). According to a recent study from University of California Santa Barbara, larger sheephead also usually eat larger urchins and more of them (Selden et al. 2017). Smaller sheephead (less than about a foot in length) can’t or don’t even eat sea urchins, which underscores the important role that larger (and male) sheephead play in controlling the urchin population.

One strategy that has been shown to reverse some trophic cascades is the establishment of marine reserves, areas where fishing is not allowed. A marine reserve at Catalina Island near southern California has helped recuperate sheephead fish populations, especially large individuals, thus allowing them to graze freely on urchins (Selden et al. 2017). In other parts of the world like New Zealand, large species of snapper fish and spiny lobsters play a similar role in consuming sea urchins. The protection of these species inside marine protected areas in New Zealand has resulted in the recovery of kelp beds in the past, demonstrating how these marine reserves can potentially recover the abundance of large predatory fish, which in turn keep sea urchin populations contained (Babcock et al.1999). Although the population abundance of large predators can increase rapidly inside marine protected areas, the subsequent recovery of the kelp forest can take a decade or more (Babcock et al 2010). Trophic cascades can have dramatic effects on an ecosystem, and reversing those effects is not an easy undertaking. However, understanding the role of each player in the food chain can help guide management specific to an animals’ trophic role.

This post featured in our weekly e-newsletter, the Fish Report. You can subscribe to the Fish Report here.  The story was written by Sarkis Kasparian for an internship with FISHBIO through the UC Santa Cruz Environmental Studies Department.