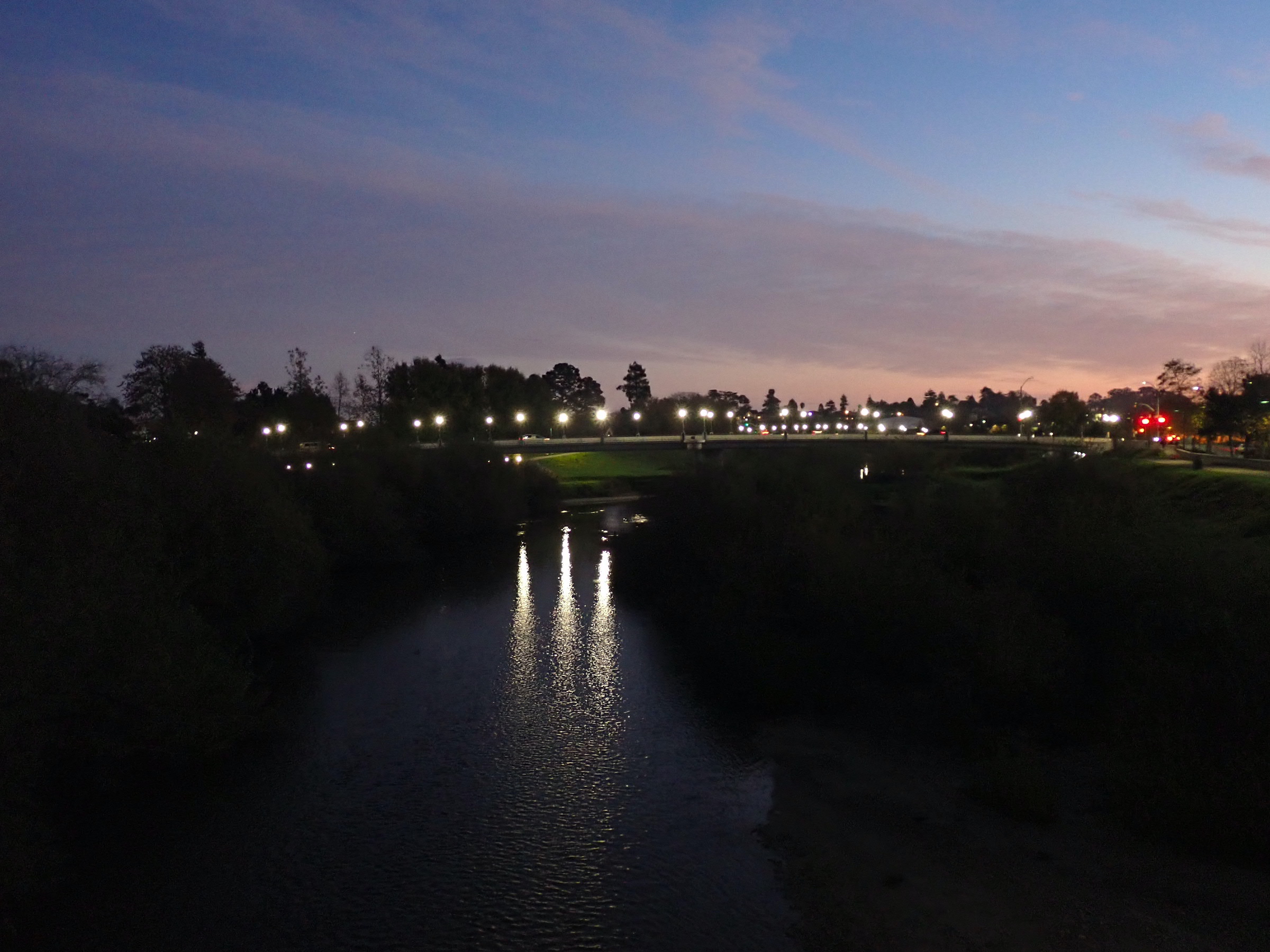 As a favorite snack of many predatory species, a Chinook salmon (Oncorhynchus tshawytscha) smolt’s best chance at survival is to sneak by undetected. One key adaptation is their tendency to migrate at night concealed by darkness. However, the Sacramento-San Joaquin Delta of today is very different from that traversed by Chinook a century ago. Contemporary estimates of survival rates for salmon passing through the Delta are as low as 5%, and this is thought to be a major reason for declines in Central Valley Chinook populations. Human alterations such as introducing invasive predatory fish, spreading exotic aquatic vegetation, and leveeing the Delta’s waterways have caused dramatic changes to the ecosystem, but one factor that has received less attention is our penchant for lighting up the night, which may literally be shining a spotlight on beleaguered Chinook salmon smolts. To better understand the effects of illumination, a recent experiment by NOAA scientists examined the response of predatory fish to artificial lighting (Nelson et al. 2020). Their results suggest that lighting might have the greatest impact on salmon survival late at night, which offers some clues to how these impacts may be reduced.

The cycle of daylight and darkness is a key driving force behind many animal behaviors and ecological processes, but these age-old patterns are being disrupted as humans introduce artificial lighting at night (ALAN). The prevalence of ALAN in aquatic environments is particularly notable, as many urban areas are located near bodies of water. In areas where ALAN is present, the darkness that once helped Chinook smolts hide from hungry piscivores has been taken away. These illuminated areas now cause smolts to slow down and aggregate, which may place them at higher risk of being eaten by predators that are also drawn to the lights. To better understand how predators and prey respond to ALAN, researchers developed an experiment using bright LED lights to illuminate study reaches in the Delta, and compared the density of predators and relative predation risk for Chinook smolts between light and dark areas. 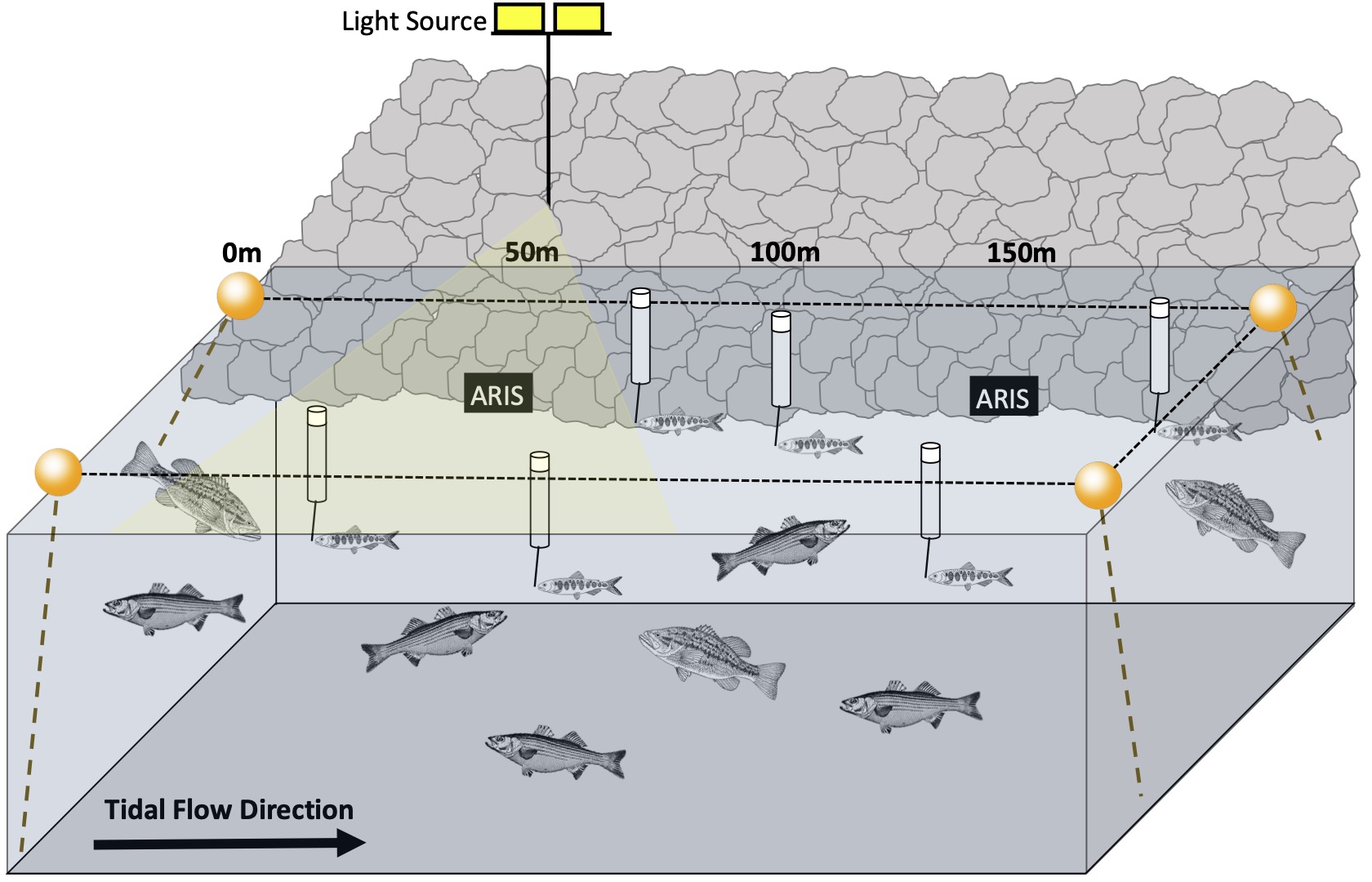 Trying to observe fish predation is challenging in daylight, and even more difficult at night. To detect predators through the darkness, the scientists deployed Adaptive Resolution Imaging Sonar (ARIS) cameras, which use sound waves to “see” fish in the water. The recordings of these cameras were used to estimate the density of large fish in illuminated and dark sections of the study reach. They also deployed Predation Event Recorders (PERs), which are floating buoys equipped with a GPS to which a Chinook smolt is tethered (shown in the diagram above). When the tethered salmon is eaten by a predator, the PER records the precise location where predation occurred. By allowing these PERs to float through the study reach, the scientists were able to compare the relative predation risk in the lit and unlit sections.

Although the ARIS images could not be used to identify fish to species, the presence of large-bodied individuals – which were likely predators such as striped bass (Morone saxatilis) or largemouth bass (Micropterus salmoides) – was found to increase nearly four times in the presence of ALAN. Importantly, this increase only occurred later in the night (three to five hours after sunset) whereas no increase in predator density was noted in the first three hours after sunset. Similarly, the relative predation risk for Chinook smolts as measured by the PERs was shown to increase with ALAN intensity during the late night period, and was found to be positively related to increasing predator densities. 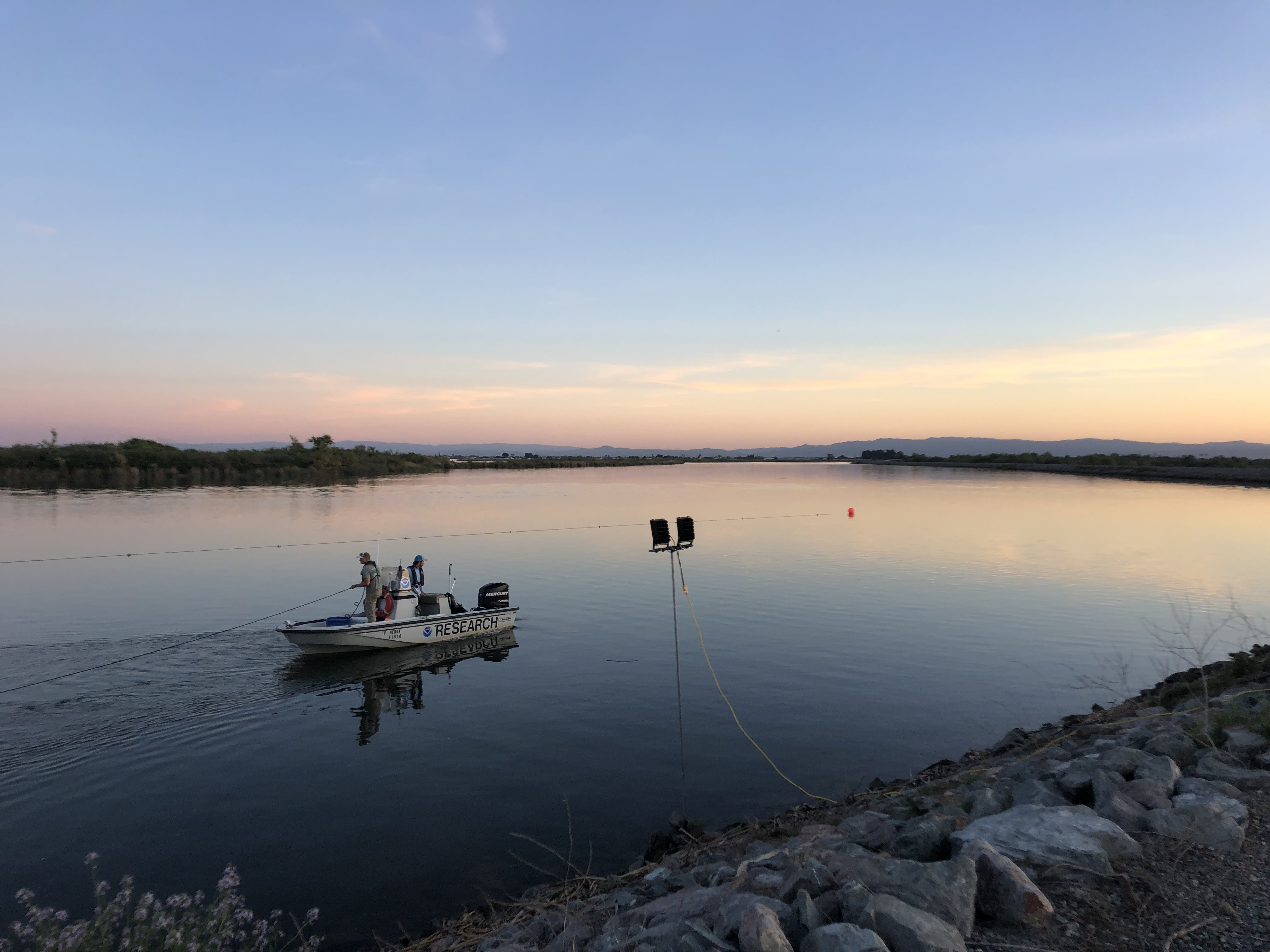 The finding that ALAN may increase predator density and Chinook predation risk only later in the nighttime yields an interesting possibility for management. The lights that humans place near aquatic ecosystems are important for recreation and safety, but reducing illumination later in the night when human activity is lowest and fish sensitivity is highest may have the potential to help improve survival. More studies using free-swimming rather than tethered smolts, variable intensities of light, and more permanent ALAN sources like bridges that predators have had a longer time to cue in on will all help provide greater insight into the mechanisms behind the patterns the researchers observed. However, this study was an important first step that suggests turning down the lights may help smolts sneak past predators.