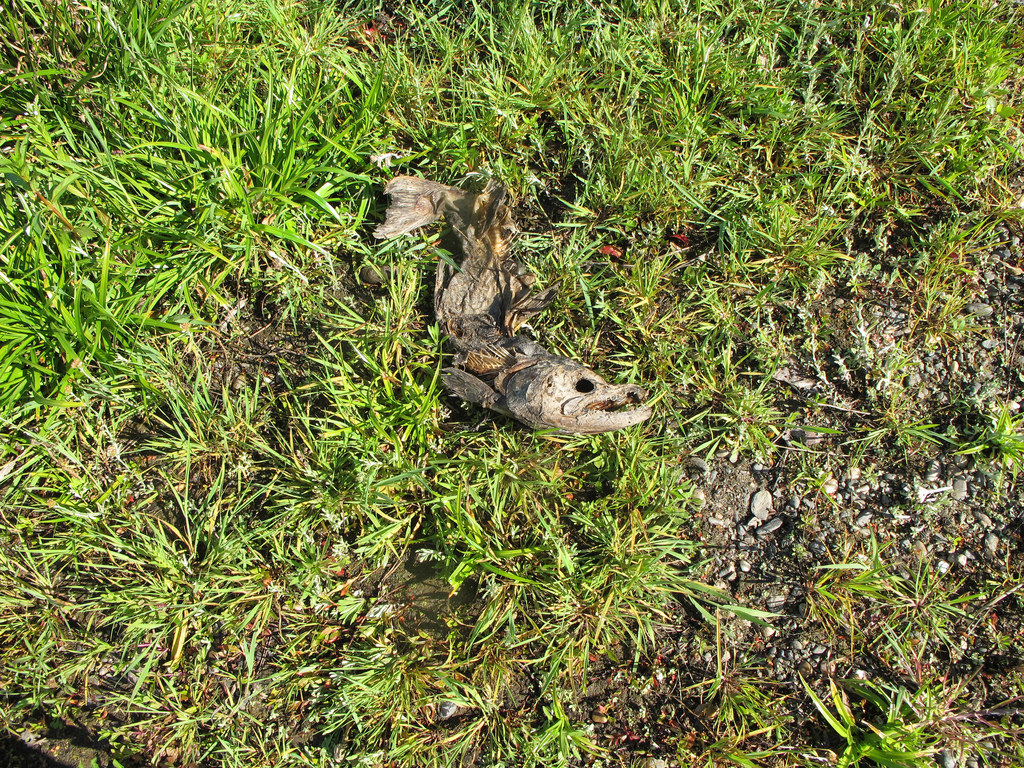 From dying salmon, mighty redwoods grow. Scientists have long studied how the expansive, lush forests of the Pacific Northwest are nourished by an annual fertilizer boost provided by migrating salmon. As salmon return from the ocean, where they can gain more than 98% of their body weight, they import a wealth of nutrients from their marine feeding grounds to the freshwater habitats of their birth. Stream networks act as arteries of the landscape, allowing salmon – and the nutrients they carry –  to disperse across large swaths of the Pacific Northwest. A diverse array of animals feast on this seasonal salmon buffet, and through their digestion distribute “fish fertilizer” far beyond river channels. Carcasses that go uneaten slowly decay and provide nutrients for microbes and plants. In this way, the parental generation of salmon likely serves to enhance conditions for their offspring by boosting plant growth and food resources in the streams where they lay their eggs. The same principle applies to Central Valley streams, where nitrogen from the ocean, transported in the form of Chinook salmon, can contribute up of a quarter of the nitrogen found in wine grapes cultivated near streams with appreciable salmon runs (Merz and Moyle 2006).

Salmon migrations are not the only pathway for marine nutrients to enter freshwater and terrestrial systems. Seabirds that forage over great expanses of the open ocean concentrate nutrients in the form of guano on islands where they roost and nest (Anderson and Polis 1999). There, the fertilizer they provide supports plant life in an otherwise nutrient-limited environment. Local plants and animals have adapted to and rely upon this nutrient input, and interruptions or changes to the mechanisms that transport nutrients from the ocean to freshwater and terrestrial environments can have far-reaching consequences. Scientists suggest that currently, the Pacific Northwest receives a mere 6-7 % of the marine nutrients historically provided by returning salmon to fertilize the next generation’s rearing habitat (Gresh et al. 2011). In the case of salmon, overfishing, habitat destruction, and poor management practices have all contributed to population declines, and now their low abundance – and the lower amounts of nutrients they transport – may limit their ability to recover. On the Aleutian Islands, the introduction of foxes to bolster the fur trade has reduced the number of seabirds, and the loss of their guano has in turn changed the soil fertility and transformed formerly rich grasslands into harsh tundra (Croll et al. 2005).

Fish don’t just transport nutrients – they can also benefit from nutrients transported by other species. In a study published earlier this year in the scientific journal Nature, researchers describe how exotic introduced rats can disrupt the transfer of marine nutrients to tropical islands by decimating seabirds (Graham et al. 2018). On islands that have remained rat-free, birds deposit 200 times more nutrients than on those with rats. The reef systems that surround the islands also receive a nutrient boost from the guano runoff. As a consequence, reef fish grow faster and their biomass is greater near rat-less islands. This study illustrates the complex connectivity among different communities offshore, near shore, at sea, and on land, highlighting once more how human intervention can have unexpected and widespread consequences. Efforts have been made to correct these human-caused nutrient deficits and re-establish the natural conveyor belt of marine nutrients, such as eradicating introduced species or by adding salmon carcasses – or even artificial fertilizer – to streams. In the latter case, however, studies indicate that real salmon carcasses are far superior as a source of nutrients than fertilizer pellets (Wipfli et al. 2011). More often than not, nature knows best.