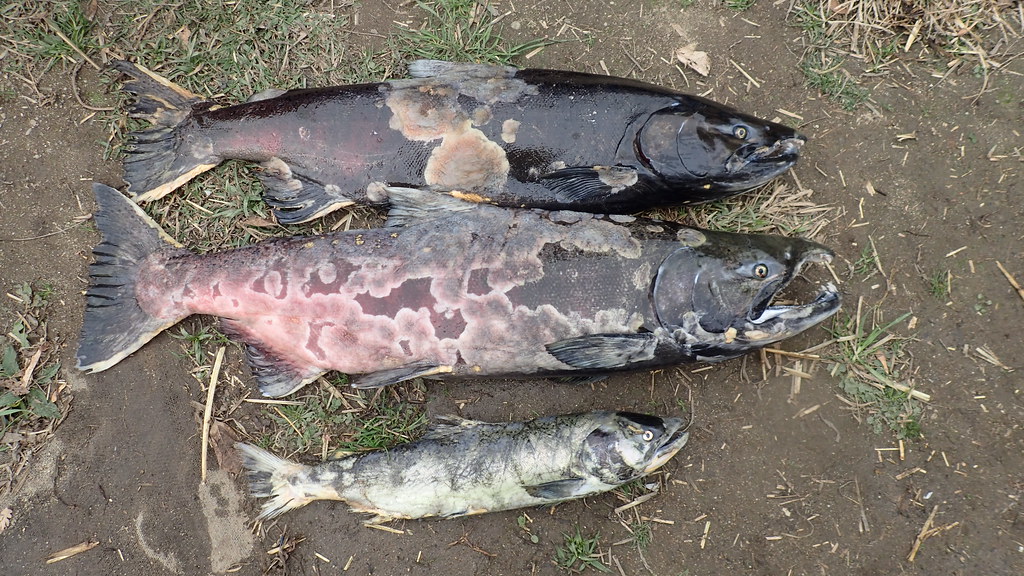 For salmon, starting life in freshwater is a useful trait for getting a head start on growth before striking out to the ocean, where bigger fish tend to have better odds of survival. But this complex, multi-habitat life cycle comes at a cost. Both ocean and freshwater environments are becoming more unpredictable, and the fish that travel between them face risks that compound across each of their life stages. Changes in both river and ocean environments have the potential to reduce salmon abundance, which makes it difficult for scientists to determine which factors have driven the precipitous declines of populations like Central Valley fall-run Chinook salmon (Oncorhynchus tshawytscha). To parse this messy situation, biologists can gain insights from life-cycle models. These models allow researchers to create a simplified representation of an infinitely complex ecological reality, thereby teasing apart the relative influence of various factors on the salmon life cycle, and which life stages are most sensitive. To this end, biologists at the University of California, Santa Cruz and NOAA Fisheries recently published the findings of a newly constructed model for Central Valley fall-run Chinook (Friedman et al. 2019). By incorporating data related to important parts of the salmon life cycle, this model explained 68% of the variation in annual returning adult salmon numbers and provided insight into factors that may be improved through management efforts.

The Central Valley fall-run population is a fraction of its historic size and continues to face challenges as a result of factors that range from loss of habitat and changing ocean conditions to pressures from predation and harvest in freshwater and the ocean.  Even under good environmental conditions, fall-run Chinook face a slew of challenges over the course of their lives. The researchers used observed numbers of adult fall-run Chinook salmon returning to spawn in the Central Valley each year from 1988 through 2016, and tested numerous models to explain salmon survival. The model that best explained the data included the factors of marine predation risk, egg mortality based on temperature, and freshwater flow during juvenile outmigration. Of note, high flows did not commonly occur during the period of time assessed, but on the rare occasions they did occur – 1983, 1986, and 1998–2000 – they corresponded to high estimates of salmon survival. However, higher flows weren’t always enough to increase survival, as ocean conditions and ocean predation were more influential in certain years (such as 2007 and 2008). Temperature also played a large role, as even a 1˚C change in stream temperature during salmon egg incubation was shown to have significant impacts on the population. In short, even during years when conditions in one habitat are good, overall adult returns may still be poor due to conditions in another habitat.

While these variables explain much of the variation in adult salmon returns, it is worth noting that they are not the only factors at play. Predation in freshwater environments or the availability of spawning habitat may also play a significant role, but were not included in this assessment. The analysis did highlight issues that may play a larger role in the future. Fall temperatures during salmong egg incubation have shown an increasing trend over time, suggesting this may become a more significant contributor to population abundance. Another example is the increasing variability in the California Current Large Marine Ecosystem (CCLME) and increasing marine predator populations. These changes may lead to heightened predation risk for outmigrating juvenile salmon, particularly in years when other prey species are less abundant. On top of these increased stressors, salmon may also have a reduced ability to adapt due to their diminished genetic and phenotypic diversity. As a result, the impacts of factors like freshwater flow and incubation temperature may be even more extreme than what would be expected for a more diverse population. This study demonstrates that the conditions fall-run Chinook experience in freshwater can affect their subsequent survival in the sea. Life-cycle models can help design management strategies that incorporate the dynamics between freshwater and marine life stages. In general, any management efforts that promote the diversity of the natural fall-run population will help increase their resilience to changing environments. For a complex, cosmopolitan species like the Chinook salmon, an adaptable fish is a successful fish.