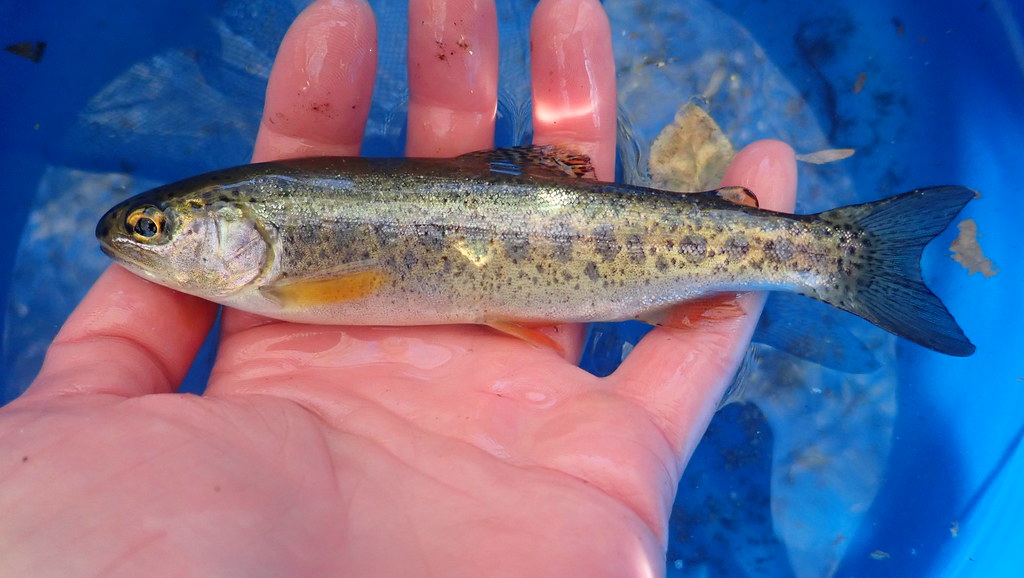 Despite countless studies seeking to determine what makes an individual Oncorhynchus mykiss “decide” to migrate to sea and become a steelhead, or stay in freshwater and become a rainbow trout, the behavior of these fish continues to defy simple explanation. For example, some studies have found O. mykiss that grow most rapidly are more likely to migrate, whereas others have found the exact opposite. These inconsistencies result from the complex, numerous, and interconnected factors affecting migration. Migratory behavior is known to be influenced by genetics, but it’s not certain whether that influence is direct or indirect. In other words, it’s unclear whether an individual inherits genes from its parents that directly dictate its migratory status, or rather inherits genes that code for traits that may in turn play a role in its future life-history trajectory (an indirect relationship). To elucidate the interplay between genes and migration, researchers recently assessed the relationship between juvenile growth and a portion of the O. mykiss genome associated with migratory behavior (Kelson et al. 2020). Their findings published in Biology Letters suggest that these genes have an indirect effect on the expression of anadromy, which may give O. mykiss the flexibility to respond to changing environmental conditions.

Migration is strongly associated with a region of the O. mykiss genome known as Omy05. In addition, the growth rate of juvenile O. mykiss has a strong genetic basis and is linked to migration. The effects of growth rate on migration behavior vary and depend on context, but it isn’t clear whether genes in the Omy05 region also affect growth rates during early life stages. Juvenile trout growth is a result of many factors, from food availability to water temperature to genetics. The purpose of this study was to see if the genes contained in the Omy05 region might be one of those factors, which would support the hypothesis that these genes influence migratory behavior indirectly via their effect on growth rates.

In the laboratory portion of this study, two strains of O. mykiss known for fast juvenile growth and a third strain known for slower growth were genotyped at the region Omy05, meaning the scientists analyzed variation in DNA across this region of the genome. The resulting sequences were then used to assign each fish a haplotype, which refers to the specific combination of genes in the Omy05 region that an individual received from its parents, and which have been linked with migratory behavior. The haplotype categories included anadromous, resident, or heterozygote (a mix of both). The frequency of the haplotype categories in each of the O. mykiss strains was compared to the respective growth rates, and it was found that the rapid growing strains exhibited mostly resident haplotypes, whereas the slower growing strain exhibited mostly anadromous haplotypes.

The researchers also conducted a field assessment in the South Fork Eel River of California, where young-of-the-year O. mykiss were sampled in pools where they were rearing over the summer. In addition to measuring each fish, scientists collected clips of tail fin tissue, and estimated fish density in each pool. The researchers then used statistical models to compare body size, Omy05 genotype, and fish density. Their results showed that juveniles possessing the resident genotype tended to be slightly larger than juveniles with the migratory genotype, a trend that held true even when fish densities were high. This demonstrates that even within pools where rearing conditions are identical for all fish, those individuals possessing a resident genotype are able to grow more rapidly.

The laboratory findings demonstrate a shared genetic basis between juvenile growth and migratory behavior, and the field results indicate that this genetic basis is related to early life growth rates in wild fish. Together, these results suggest that the Omy05 region is influencing migratory behavior indirectly through its effects on growth rate. This may be advantageous, as it gives individual O. mykiss flexibility to pursue the most beneficial life history strategy based on environmental conditions. For example, if conditions in a stream are poor, individuals have the ability to migrate even if they possess a resident genotype. Further, the flexibility of indirect control likely helps preserve life-history diversity over time and contribute to population stability. This information helps reveal some inner workings of O. mykiss migratory behavior, but the complex relationships between other factors, such as sex and environment, and these indirect genetic mechanisms remain murky. As much as we keep learning, O. mykiss still keep many secrets.