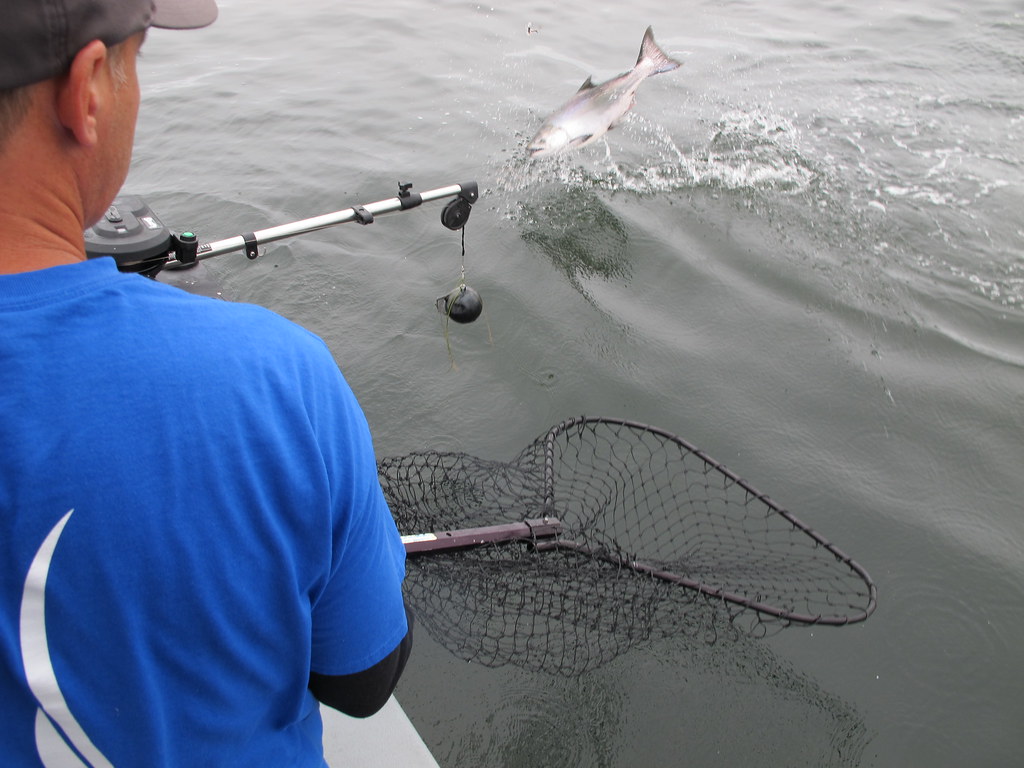 Today’s Flashback Friday describes the benefits of “fishing in a barrel” through the creation of terminal fisheries.

California’s hatcheries have released approximately 2 billion Central Valley fall-run Chinook salmon into the state’s waterways since the construction of the first modern fish hatchery in 1942. As of today, more than 90 percent of the California’s ocean population of salmon originated in hatcheries (Barnett-Johnson et al. 2007). This massive production of fish has ensured that the fall-run salmon fishery remains relatively stable despite the numerous threats that have decimated other California Chinook salmon populations, like winter-run and spring-run. However, this production comes at a cost, such as threatening the genetic diversity of wild salmon when the two groups interbreed. Keeping hatchery produced and naturally spawned salmon separated in the wild is one strategy for reducing such threats.

As detailed in previous Fish Reports, hatchery-origin fish have profound impacts on the few wild populations that remain. Hatchery fish, which are highly genetically similar, decrease the genetic diversity of a naturally spawning fish population when they interbreed, and can reduce fitness by essentially erasing generations of natural selection for traits adapted to the local environment (Araki et al. 2008, Christie et al. 2014). Hatchery fish are also highly likely to stray, or return to waterways other than their stream of origin, which has contributed to fall-run Chinook salmon in the Central Valley now being considered a genetically homogenous population (Williamson and May 2005). In addition, stray rates have likely increased in recent years due to higher proportions of young hatchery fish being released directly into the San Francisco Bay estuary, which does not allow them to imprint on their stream of origin. While fish released into rivers at hatchery locations are only expected to stray about 1-10 percent of the time, stray rates are now as high as 98 percent in some cases.

Recent efforts have been made to reverse these trends in California by preventing interbreeding between hatchery- and natural-origin fish, and attempting to increase production of natural-origin fish, things that fisheries managers throughout the Pacific Northwest and Alaska have focused on for years. In Alaska, hatcheries are designed to increase abundance and enhance salmon fisheries while still protecting wild stocks, not to mitigate for the loss of wild fish production. Thus, the Alaskan hatchery program was designed to minimize the influence and interactions of hatchery fish and wild populations, in part through careful planning of hatchery locations and harvest areas.

One tool that has proved highly useful for accomplishing these goals in Alaska is terminal fisheries. These are areas, usually small bays or coves, where hatchery fish are planted or held in net pens as juveniles, which allows them to imprint on that location. These locations do not have river connections to upstream spawning grounds, so when the hatchery fish return after a few years to spawn, they are essentially stuck and available for harvest by anglers. This protects and maintains the population of wild salmon, while allowing for a higher level of harvest in the terminal fishery location. Perhaps the most famous example can be found on the Homer Spit at the end of the Kenai Peninsula in Alaska, where the Alaska Department of Fish and Game began stocking Chinook salmon in 1984 to create a terminal recreational fishery.

Terminal fisheries have successfully helped Alaskan hatchery programs balance their dual goals of production and protection of wild salmon populations. Hatcheries in Alaska produce a much smaller percentage of the total fisheries catch (between 15 and 40 percent) compared to California (nearly 90 percent); however, the scale of both hatchery and wild salmon production is much larger in Alaska, and hatcheries in the state produce over 1.5 billion juvenile salmon per year. Despite this incredibly high production, the straying rate of hatchery-origin fish remains remarkably low. In ten wild salmon streams in Southeast Alaska, stray rates averaged a fraction of a percent over a period of thirty years. Of course, several steps must be taken to ensure this level of success, including marking all hatchery fish (through the clipping of their adipose fins), which the Hatchery Scientific Review Group called for in a 2012 review of California hatchery practices, but still has not been implemented. Terminal fisheries are an interesting idea that are worth exploring in this salmon-hungry state, where catching the proverbial ‘fish in a barrel’ could reel in angler support.