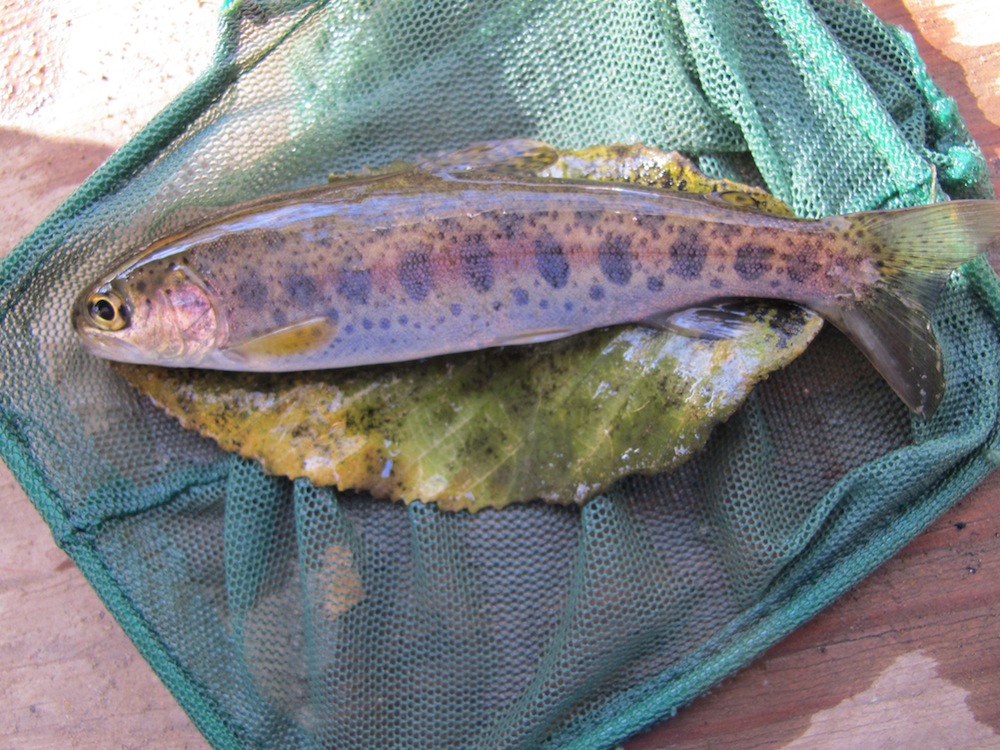 The fish species Oncorhynchus mykiss possesses the ability to express two different life histories (migrating to the ocean or remaining in freshwater), making it one of the most interesting yet difficult species of fish to manage. The resident form, known as rainbow trout, stays in freshwater its whole life, while the anadromous form known as steelhead migrates to the ocean. A few months ago, we reviewed a study that analyzed genetic and environmental factors that influence anadromy in Oncorhynchus mykiss (see One fish, two forms, many questions), and concluded that management plans may be favoring a life strategy of residency over anadromy. Why does it matter whether a fish migrates or remains a resident, and how do the costs and benefits to each strategy affect the long-term resiliency of the species? Diversity within a species is important when trying to adapt and survive in a changing environment. O. mykiss will display greater resilience to extreme environmental changes, such as the current drought plaguing the western United States, if they can maintain a rich diversity of genes and heritable traits.

Both anadromy and residency are valuable traits for the resilience of the species, but each also comes at a cost. As a resident form, a rainbow trout is not exposed to the gantlet of obstacles (such as intensive predation, entrainment in water pumps, or unfavorable ocean conditions) that all reduce the likelihood of a steelhead surviving its journey to the ocean and returning to spawn in its natal stream. However, resident rainbow trout will also mature at an earlier age, while anadromous steelhead are much larger when they mature and have increased energy stores that can lead to improved reproductive success (Kendall et al. 2014). But even if rainbow trout have lower reproductive success than steelhead in a given year, a residency life history tends to lead to greater survival, which increases a rainbow trout’s likelihood of successfully producing offspring over time. Both strategies have pitfalls, but also ensure that the species will continue to thrive despite environmental changes.

A group of scientists from agencies and universities in Oregon and Washington studied the tradeoffs of different life history expressions in O. mykiss. The study included nine different rivers in western North America that support self-sustaining populations of O. mykiss, and are not supplemented with hatchery fish. The scientists used rotary screw traps to capture O. mykiss migrating downstream from March–July in 2011 and 2012. They sampled about 1,600 O. mykiss for the study and measured fish forklength, removed a small fin tissue sample to later determine the sex of the fish, and collected scales to establish the fish’s age. The key finding was that outmigrating O. mykiss (which are presumed to be steelhead) are more likely to be female: on average, 65% of the fish sampled in this study were female. This suggests that size at maturation, which is a key advantage of the steelhead strategy, is more important in females than in males. If a female O. mykiss migrates to the ocean, she will have higher viable egg production when she returns to spawn, which comes with increased body size and leads to a higher reproductive success rate. For males, the limiting factor for reproduction is securing a female, and larger size does not always provide an advantage. Large males may display aggressive tactics in securing a mate, but smaller males may employ sneaking tactics to compete for a spawning female. While a complex array of factors influence whether an individual O. mykiss migrates or not, it appears males and females may benefit somewhat differently from each approach.