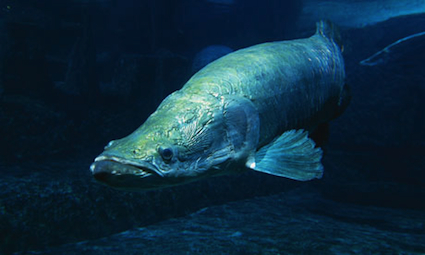 According to a new study in the Journal of Applied Ichthyology Arapaima gigas, a large south American air-breathing freshwater fish, is at risk of extinction. The fish is said to be in jeopardy for a variety of reasons, including overfishing, which is partially due to its taste and ease of catch. Over time the Arapaima developed the ability to breath air, which was a favorable adaptation in warm, turbid, oxygen starved waters of the Amazon Basin. Unfortunately, that adaptation is now making them susceptible to over-harvest, as the fish are easy prey for fishermen with spears and clubs when they surface to breath. Arapaima can grow to over 8 feet in length and weigh several hundred pounds.