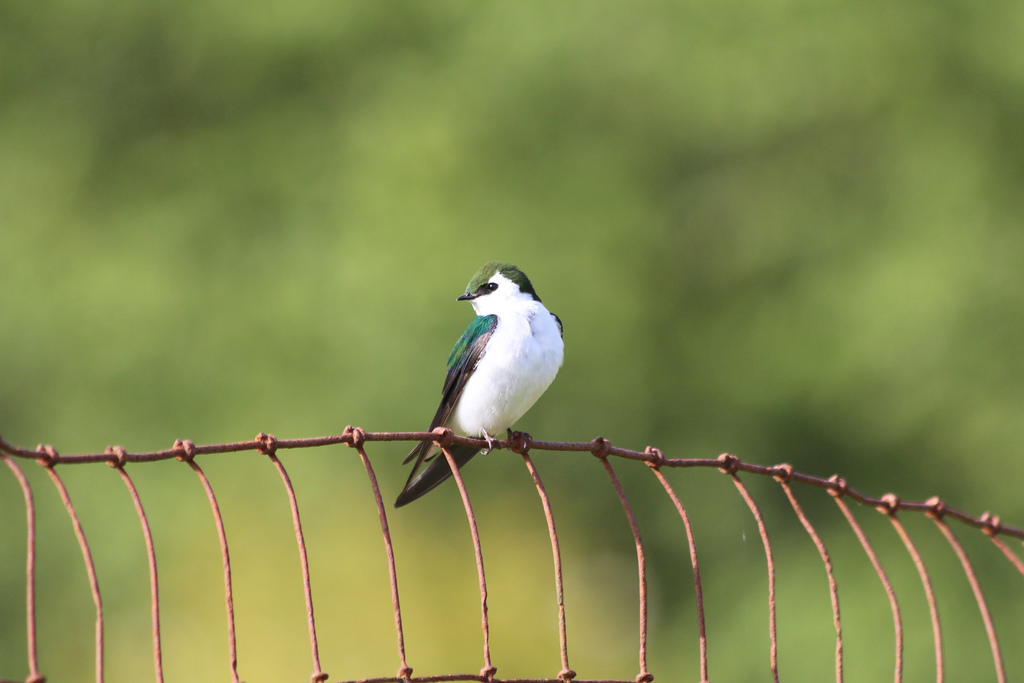 Back in February of this year, our field technicians were thrilled to witness an unusual number of violet-green swallows (Tachycineta thalassina) swarming around our Waterford rotary screw trap on the Tuolumne River. Over a thousand birds filled the sky as they darted around and feasted ravenously on a surplus of hatching flies from the river. These swallows often forage in flocks with other species, and normally only a few migratory violet-green swallows might be spotted in a group consisting mostly of resident tree swallows (Tachycineta bicolor). However, our technicians were able to identify the birds that swooped close by as they worked. They spotted the iridescent green back and violet rump of the violet-green swallows that glistens in the sunlight, as opposed to the turquoise blue iridescence on the back of a tree swallow.

The weather actually helped our staff with bird identification. On cloudy days, the birds at the trap all mostly looked to have gray backs, and their brilliant colors were only more visible when the sun came out. If you have spent much time looking at birds, you may have noticed that iridescent colors in feathers appear brown or gray in low light. This is because the color is formed when light is reflected off the microscopic barbules that the feather is composed of, rather than a pigment. The barbules reflect the light much like a prism, which creates the shimmering iridescent colors seen in many bird feathers – and which means true bird colors may be hidden on overcast days. There are other types of structural colors besides the iridescent colors. For example, the blue color in feathers is created by air bubbles within the feather barbules that scatter the light. This can be seen easily in birds like our local California scrub-jay and Western bluebirds. To hone your bird identification skills, take some time in your yard to examine how bird feather colors are affected by different levels of light!