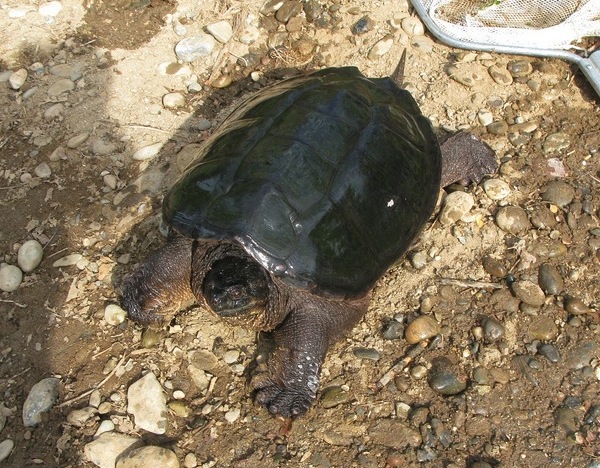 Breathing can take a variety of forms, but aquatic turtles have developed some of the more unusual strategies. The Eastern snapping turtle, Chelydra serpentina serpentina, is a non-native reptile now found in California – such as the one shown above, which we encountered in one of our rotary screw traps. Snapping turtles have become established in many areas throughout the state, including waterways in the Central Valley. This long-lived species can reach a fairly large size of 18.5 inches in length and weigh up to 45 pounds in the wild. It is an omnivore, consuming various prey items such as algae, aquatic invertebrates (e.g. snails, worms, insects), fish, and other reptiles. However, one of the most interesting adaptations in snapping turtles, as well as in some other turtle species, is the multiple ways they can extract oxygen from a watery environment.

Not only can turtles actively breathe oxygen into their lungs, similar to humans, but all aquatic turtles have some ability to extract oxygen from the water in which they live (Leghler and Vogt 2013). One way is through a process called “buccopharyngeal pumping,” or gas exchange that occurs when passing water across specialized membranes in the turtle’s mouth. However, another more unusual form of gas exchange occurs at the opposite end of the snapping turtle. Eastern snapping turtles have specialized cells in their cloaca (an opening used for excretion and reproduction) called cloacal bursae that can extract oxygen from the water. Much like the gas exchange that occurs during buccopharyngeal pumping, oxygen is absorbed by these bursae into the bloodstream. Although unusual, it appears that this aquatic respiration is limited in snapping turtles, and they primarily breathe air through their lungs (Ernst and Lovich 2009). Gatten (1980) found that buccopharyngeal pumping and/or cloacal respiration accounts for anywhere between five and 31 percent of a snapping turtle’s oxygen consumption, depending on water temperature and environmental factors. In contrast, the Fitzroy River turtle (Rheodytes leukops) in Australia can use cloacal respiration to obtain a large portion, if not all, of its oxygen (Legler and Georges 1993). Respiring through their multi-purpose rear end provides these turtles with a breath of not-so-fresh air – or water, in this case. 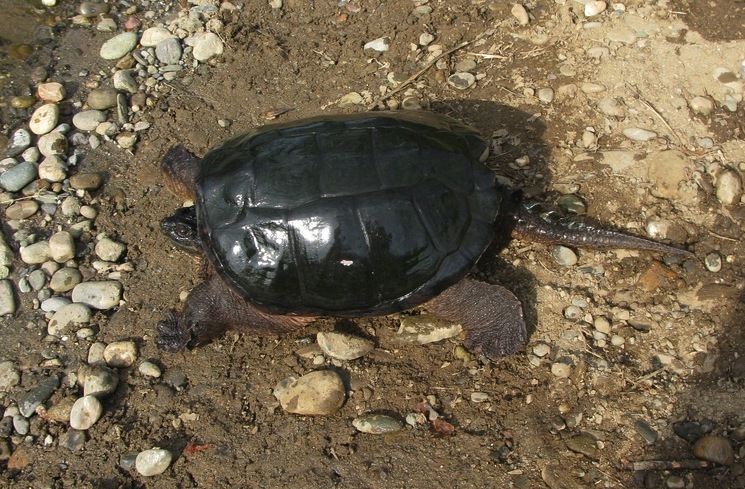