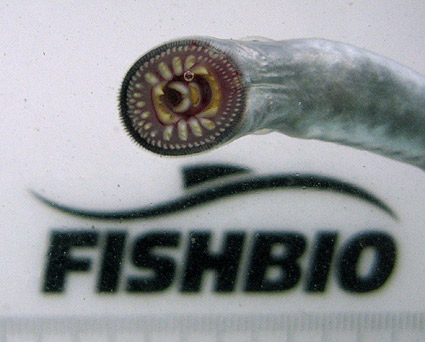 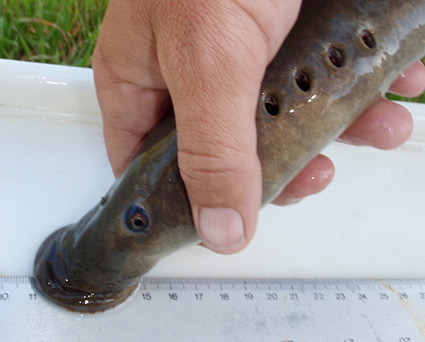 The Pacific lamprey, Lampetra tridentate, is an ancient jawless fish that resembles an eel. The adults are parasitic attaching themselves to the side or undersurface of its prey where they use their rasping tooth plates to feed on blood and body fluids. They begin their life cycle as an ammocoete or larvae, usually within a freshwater stream. They burrow tail first into mud or sand where they filter feed on algae and organic matter for 5-7 years before developing eyes and morphing into adults as they migrate downstream to the Pacific Ocean.

Like salmon they are anadromous, migrating to freshwater for spawning, and usually die following spawning. Also like salmon they serve an ecological role transporting nutrients such as nitrogen to freshwater ecosystems. It’s believed that the juvenile lamprey outmigrating to sea were once much more numerous and acted as a buffer to reduce predation on salmon, and provided a good food source for birds, fish, and mammals. Even though Pacific lamprey populations have declined the US Fish and Wildlife Service ruled that they do not warrant listing. We occasionally capture adult lamprey and typically capture thousands of juveniles during our central valley salmon outmigration monitoring.