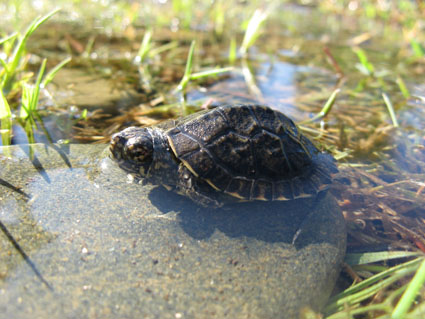 The Western Pond Turtle or Pacific Pond Turtle (Actinemys marmorata) is the only native turtle that lives in northern and central California. It ranges from Washington to Baja California. Once a common sight along most low elevation ponds and streams, the Western Pond Turtle is quietly disappearing from the California landscape. Over 90 percent of the freshwater ponds, marshes, and year-round streams where the turtles once lived have been drained, diverted, or developed. The subspecies Southern Pacific Pond Turtle (pictured here in a Central Valley river) is in decline across most of its range. They were once very abundant in the southern San Joaquin Valley, with population estimates of over 3 million, but now they are rarely found. Loss of habitat due to urbanization and predation of hatchlings by non-native bullfrogs is the greatest threat. They are currently a California Endangered Species Act species of special concern.