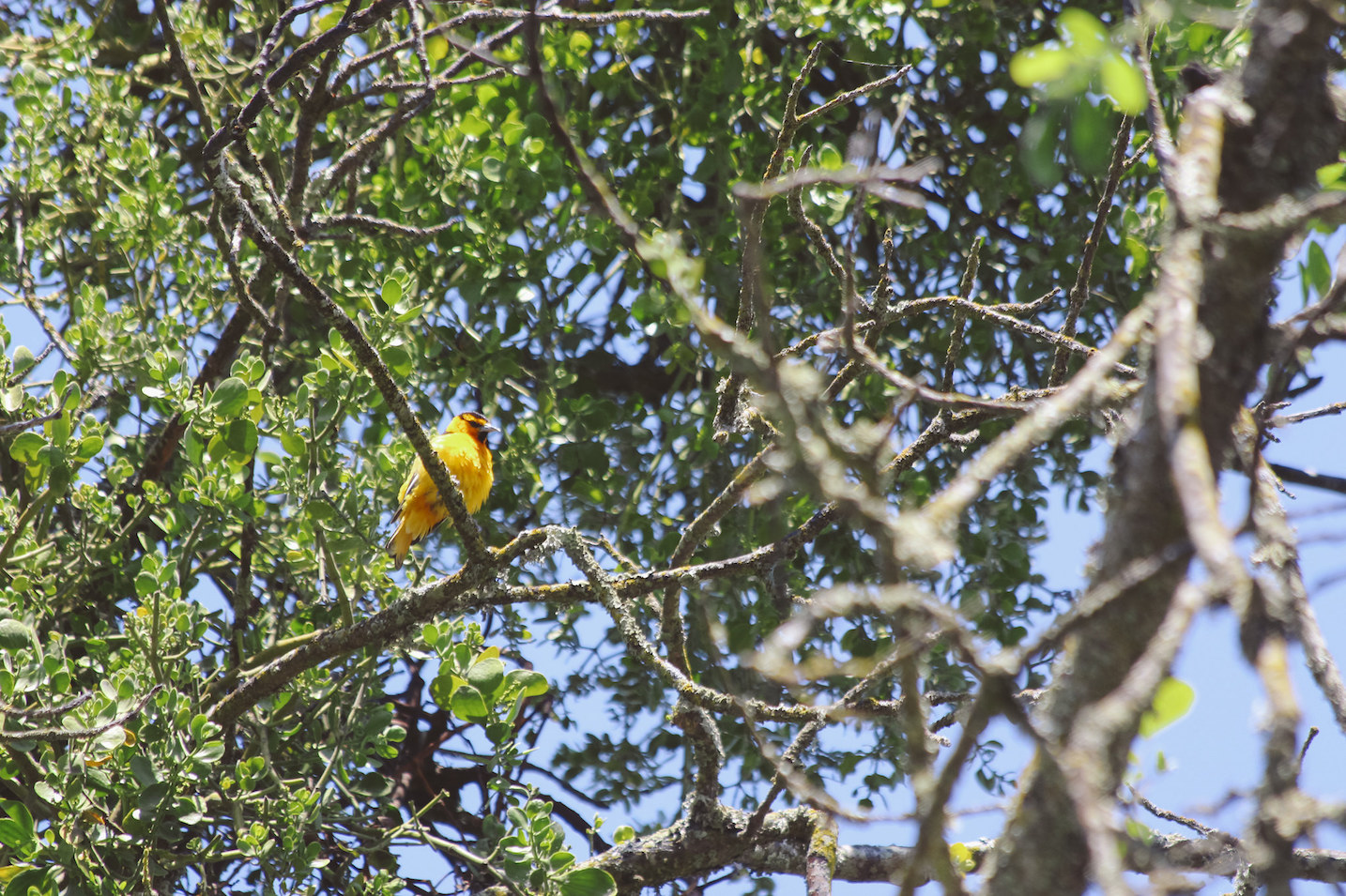 When it comes to color in the bird world, it’s hard to beat the vibrant, flame-orange feathers of the Bullock’s oriole (Icterus bullockii), which one of our biologists encountered in the field. As a member of the blackbird family, these flamboyant birds make their relatives look downright drab. While the males flaunt the more striking coloration, the females also sport some eye-catching yellowish-orange. Present throughout California in the spring and summer, Bullock’s orioles are often found in riparian (streamside) forests, where they weave intricate hanging nests in the branches of cottonwood trees. These birds are not seed eaters, but rather prefer a diet of insects and nectar. In fact, they’re sometimes spotted gulping down the contents of hummingbird feeders.

As with many birds, the ornate appearance of the male Bullock’s oriole is intended to draw the attention of a female. When it comes to growing these fancy feathers, the phrase “you are what you eat” may be literally true. Male orioles and many other animals owe their color to the nutrients obtained from their diet. Bright oranges, reds, and yellows in nature often come from compounds known as carotenoids. Carotenoids are what create the yellow of autumn leaves, the red of ripe tomatoes, and, appropriately, the orange of carrots. In animals, these compounds may boost immune response, act as antioxidants, and produce color. Many animals get their pigmentation by converting the food they eat into color-creating carotenoids. Studies suggest this metabolic conversion happens more readily when an animal is in good health, and thus the vibrant orange of a male oriole may signal to a female “you should pick me as a mate, I’m the healthiest bird around!” In addition, it may help them obtain a good breeding territory by intimidating rival males.

Because male orioles rely at least in part on good nutrition to get their remarkable orange color, the conditions of the location where they grow their breeding plumage (their molting habitat) could have a large influence on their reproductive success. To investigate this possibility, Canadian researchers recently assessed the feathers of Bullock’s orioles to determine whether birds that molted in high quality habitats had better plumage than birds that molted in low quality habitats. For this species, molting occurs in the southwestern United States and northern Mexico. The researchers employed two different scientific tools to address this question. First, to learn about the birds’ diet and the environmental conditions of the molting habitat, the researchers used stable isotope analysis, which is a measurement of chemical elements in parts of an animal’s body, such as feathers in this case. Second, they used reflectance spectrometry, an analysis technique that accurately measures the color of the feathers by including wavelengths of lights that humans can’t see but birds can. They found that both environmental conditions on the molting grounds and the diet during molting were related to feather color and feather carotenoid content. Although future research will be necessary to evaluate the specifics of these relationships, this study suggests that conditions experienced during a molting period may have important effects on an individual’s success on the breeding grounds. So next time you’re walking in a forest alongside a stream and hear a whistling song in the branches above you, keep an eye out for the flashy orange of a Bullock’s oriole. Chances are he sought out a good habitat during his molt to ensure he’d look his best for the breeding season.