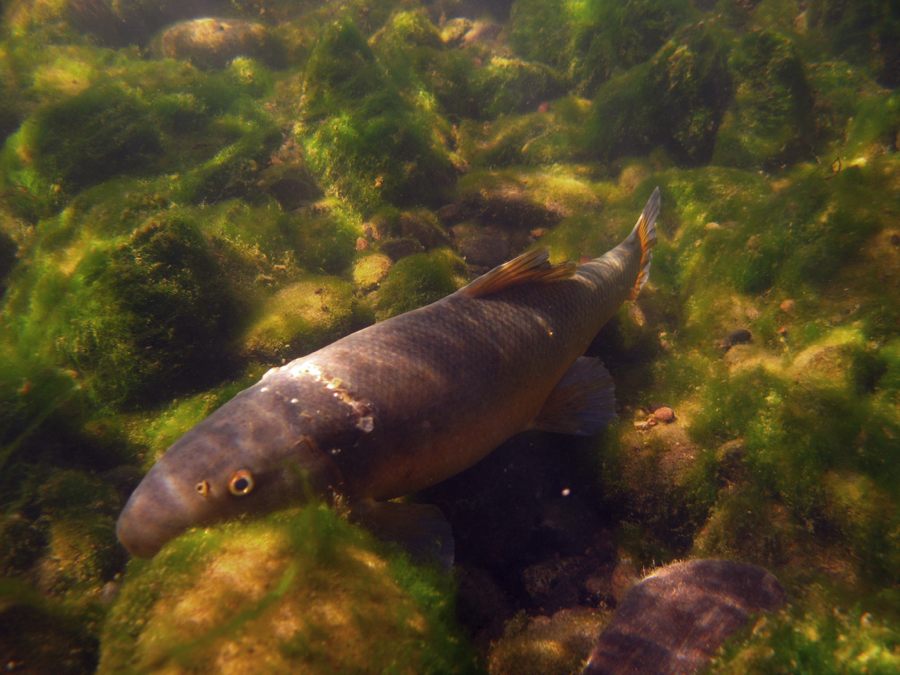 While salmon were and continue to be an important food source for Native American tribes throughout the Pacific Northwest, sucker species also have contributed to the fish diet of many tribes. Although suckers are not typically thought of as a food source, historical records indicate that many different tribes harvested sucker species for consumption. One such example is the Ajumawi tribe of the Pit River in northeastern California, who harvested the native Sacramento sucker (Catostomus occidentalis).

The Sacramento sucker is one of approximately 80 species in the family Catostomidae, and occurs in many of the rivers and water bodies throughout central and northern California. The Sacramento sucker is a benthic species that occupies the stream bottom, and primarily feeds on detritus, algae, and macroinvertebrates (see Speaking of lips). This long-lived fish can live up to 30 years (Moyle 2002); however, this is not uncommon for sucker species.  Additionally, this species is highly fecund and deposits approximately 5,000-32,000 eggs per spawning period (McBain & Trush, Inc.  2002). While we have seen declines in many fish populations that are attributable to anthropogenic activities (e.g., over- fishing, pollution, water diversion, and dams), the Sacramento sucker has continued to thrive (Moyle 2002). This may be due to their ability to tolerate a wide range of water temperatures and degraded water quality. Their phenotypic plasticity likely has allowed them to thrive in changing environments both historically and in the present.

In the early 1860s, salmon populations in the Pit River area started to decline, likely due to settlement and stream pollution of lumber mills. The Ajumawi tribe was also relocated outside of areas where they had access to the Pit and Fall River fisheries in the 1880s (Evans 1990). The construction of the hydroelectric operation at Pit River Falls in 1922 further reduced salmon availability, and the construction of Shasta Dam in 1945 eventually stopped all salmon access for the Ajumawi tribe. However, the Sacramento sucker remained abundant and comprised a large portion of the Ajumawi diet from 1900-1950. This species was harvested during the mid winter-season, a time when food supplies may have been scarce. The presence and design of stone traps that have been preserved in the waters surrounding the Ajumawi tribal areas also provide further evidence that the Ajumawi targeted this species (sources in Evans 1990). Presently, the Ajuwami tribe still harvests Sacramento suckers. Other tribes, however, such as the Klamath tribes, can no longer harvest their native suckers (i.e., shortnose sucker and Lost River sucker) because the fishes were listed as endangered under the Endangered Species Act in 1988.