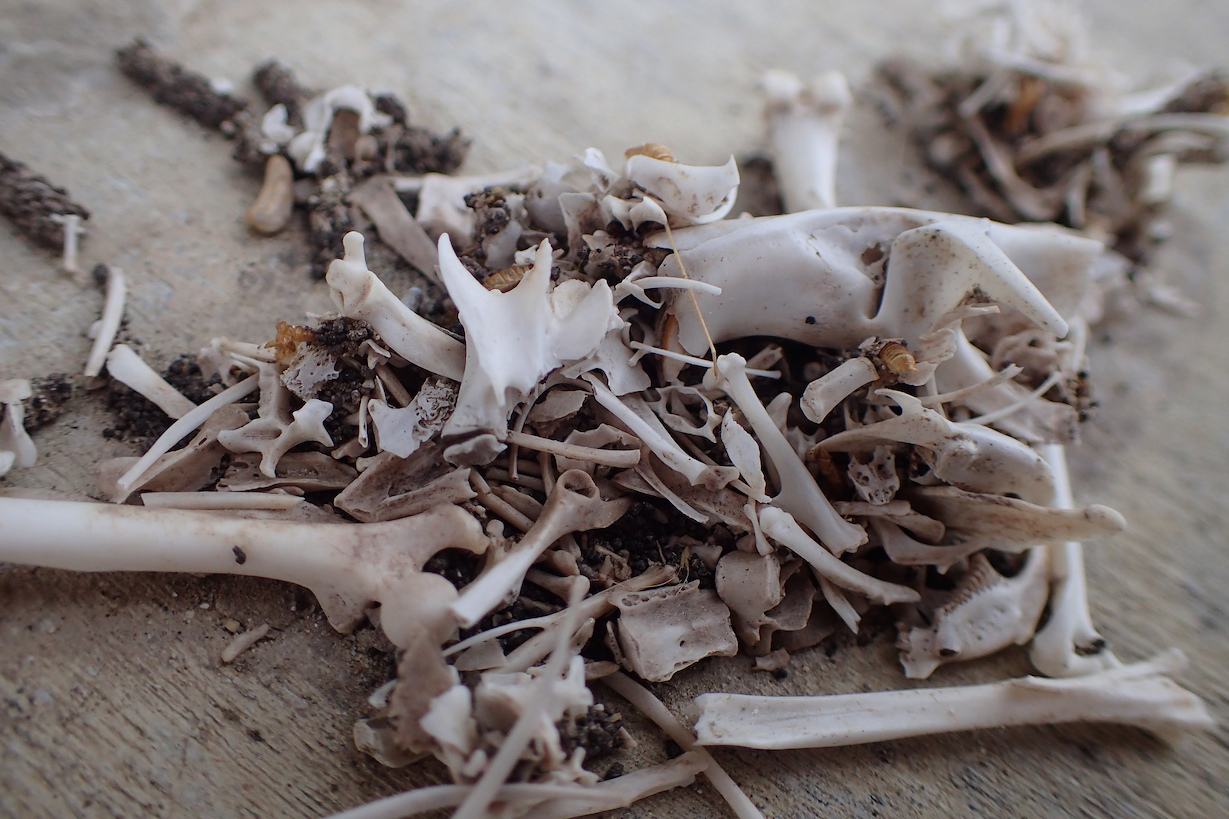 The unsettling pile of bones pictured above may look like the remains of victims snatched up by a cave-dwelling ogre, but the zoomed-in image actually shows the remnants of an owl’s dinner. These golf-ball-sized lumps of fur and bone, known as owl pellets, are regurgitated by owls after eating. Owls are considered raptors, along with hawks and vultures, which means that they capture prey with their talons and either swallow it whole or rip it into smaller, bite-sized pieces if needed. Owls will eat a variety of animals such as birds, rodents, amphibians, reptiles, insects, and fish. Larger species of owls are even known to take skunks, cats, and small canines as food sometimes. Owl pellets are made of the indigestible pieces of their prey, such as the bones, fur, feathers, scales, and teeth. All raptors produce pellets, but owl pellets contain more bone and fur because they have less acidity in their stomachs. We spotted this pellet near the Salinas weir after a rain, which likely washed away a lot of the fur and mucous that binds the pieces together.

Dissecting owl pellets can make for a fun-filled science experiment on the topic of predator-prey dynamics in the classroom. Students can each pick apart their own pellet and try to reassemble and then identify the unfortunate animal that became dinner. Since an owl will usually regurgitate one pellet per day, these fur and bone balls allow scientists to know what they ate in the previous 24 hours. Owl pellets are fairly easy to find on the ground if you know where to look and what to search for. In places where barn owls roost, they are especially easy to find. Simply scan the ground for a furry gray lump with bones sticking out of it. Be sure to wear gloves, because, believe it or not, the owl pellet isn’t the end of the food chain. Smaller organisms such as insects and bacteria begin to feast on the regurgitated mass as soon as it hits the ground. There are instructions online for how to sterilize pellets or you can also purchase pre-sterilized owl pellets.