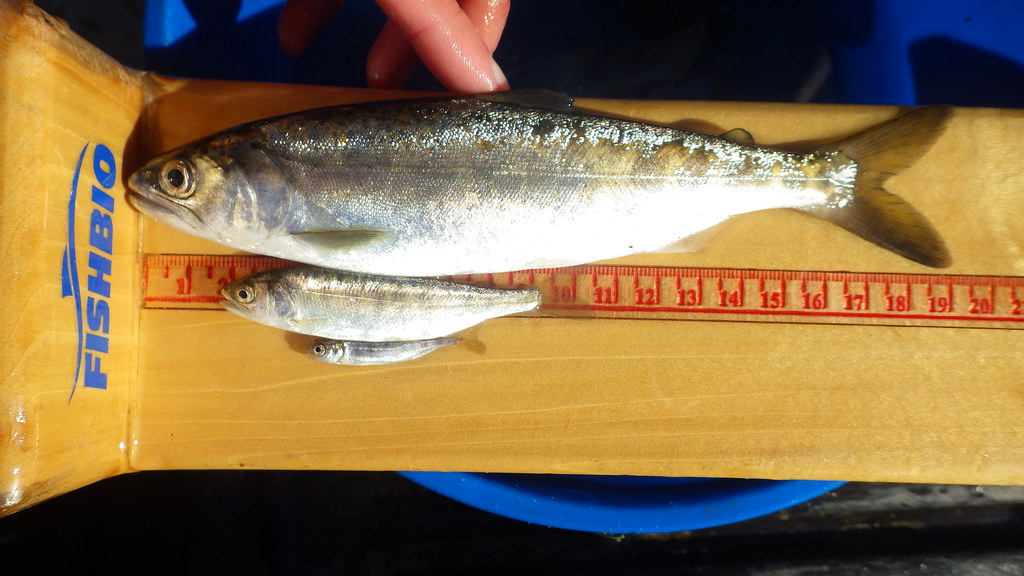 California’s Sacramento-San Joaquin Delta is unique among large West Coast estuaries in that it supports four distinct runs of Chinook salmon (Onchorhynchus tshawytscha) as well as Central Valley steelhead (O. mykiss).  However, survival estimates of specific Chinook salmon runs can be 15 to 20 times lower in the Delta as compared to other large estuaries, such as the Columbia and Fraser Rivers. Protecting the genetic diversity represented by these unique runs is critical to ensuring the longevity and resiliency of Chinook salmon population, just as a prudent stock investor diversifies his portfolio to gain stable returns even with fluctuating markets. Managing to maintain Chinook salmon diversity in California requires understanding the many different pathways young salmon can take to migrate, grow, and survive in the Delta.

Decades of management and research have been spent to study and conserve the anadromous salmon stocks that use the Delta. Historically, the highly complex channel network within the Delta, as well as the high number of life-history strategies exhibited by Chinook salmon, have made it difficult to study these fish. From 2006 to 2016, advancements in three areas of technology (otolith microchemistry, acoustic telemetry equipment, and genetic testing) allowed researchers to more effectively study individual salmon in two key areas: 1) how juvenile salmon distribute and survive in the Delta’s channel network, and 2) how alternative life-history strategies from various salmon runs use the Delta (Perry et al. 2016).

Advancements in otolith microchemistry, or studying the “ear bones” of fish, has allowed researchers to match growth rates of individual fish with their location within the watershed when that growth occurred.  By examining otoliths, Miller et al. (2010) found that 70% of returning adult fall-run Chinook salmon entered brackish water at early life stages (fry and parr) rather than as larger smolts. Contrary to previous research, a quarter of these migrating juveniles displayed noticeable growth within the estuary, suggesting this estuary rearing life-history strategy makes an important contribution to returning adult numbers.

Smaller acoustic telemetry tags have allowed researchers to identify multiple migration routes commonly used by Chinook salmon on their way through the Delta, estimate survival rates for each of the routes, and estimate the probability that a fish will use a certain route. Studying the alternative pathways at key river junctions is of particular interest. For example, Perry et al. (2013) found that eliminating entrainment into the Interior Delta by keeping fish in the Sacramento River could increase overall survival by 2–7%, prompting managers to investigate non-physical barriers at specific river junctions to alter migration routes.

Other biotelemetry studies are beginning to shed light on fish salvage operations, for which low survival has been historically reported. For instance, the majority (19 of 26) of tagged San Joaquin River fall-run Chinook salmon that reached Chipps Island in 2010 and 2011 passed through the salvage facility at the federal Central Valley Project (SJRGA 2011, 2013), suggesting this route is an important contributor to overall salmon survival when survival of fish using other migration routes is low.

Finally, improvements in genetic methodologies have allowed researchers and managers to better understand the timing and composition of each salmon run through the Delta.  Using genetic testing, Pyper et al. (2013) found that previous methods of estimating race composition, known as length-at-date models, typically overestimate the proportion of winter and spring runs while underestimating the proportion of fall and late-fall runs, leading to biased estimates of when each run is in the Delta. These biases could be avoided by incorporating genetic testing into long-term fish monitoring stations.

This decade of research has shown previously misunderstood or unknown life-history strategies (e.g., extended estuarine rearing) and migration routes (e.g., through the fish salvage operations) are important pieces in the overall survival of Central Valley salmonids passing through the Delta, while allowing managers to better estimate when protected runs (e.g., winter and spring runs) are migrating through or rearing in the Delta. These results on salmon growth, movement, and survival, combined with future research, will allow managers to prepare for challenges and changes in the Delta, such as changes in climate and water management.