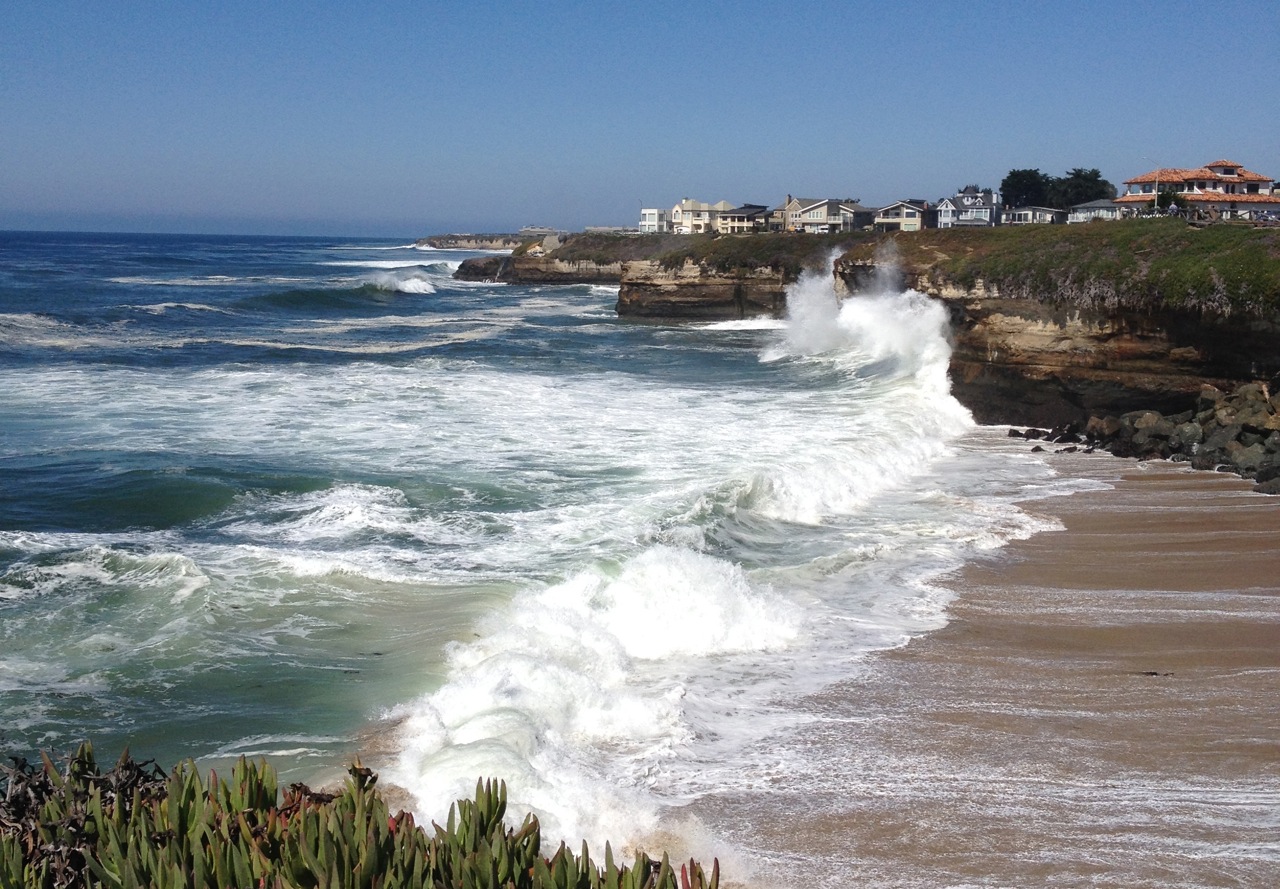 Freshwater to saltwater, rivers to floodplains, food webs and communications efforts – these were some of the many “linkages” discussed as part of the theme of the California-Nevada Chapter of the American Fisheries Society 2015 meeting. A number of our staff took the opportunity to “go coastal” for the meeting in Santa Cruz, California, from April 8-10, and found several relevant ties to our own work. One of the plenary speakers, Nann Fangue, talked about physiology as a way to study the link between environmental change and ecology, describing physiology as the way individuals interpret their environment. She discussed a project that studied the swimming performance of rainbow trout (Oncorhynchus mykiss) under various temperatures in the Tuolumne River, which showed that the fish are less sensitive to high temperatures than once thought. FISHBIO collaborated on this project with Christine Verhille, who is now our newest staff member, and constructed a swim lab on the banks of the river to study the swimming performance of these fish.

Another interesting plenary talk came from Rachel Johnson of the National Oceanographic and Atmospheric Administration (NOAA), who discussed how young salmon’s growth in freshwater improves their survival once they enter the ocean, especially when ocean conditions are poor. This linkage highlights the critical importance of restoring freshwater rearing habitat (such as our Honolulu Bar project). Mary Power of UC Berkeley discussed alternate algal-based foodwebs that can play out in river systems during times of drought. During normal years, scouring floods can wash algae downstream and make it available to a variety of grazing invertebrates, who in turn become food for fish and other animals. But without that scouring, algae are often consumed by predator-resistant grazers, and food chains become much shorter and less beneficial for fish growth. And Liz Whiteman of the Ocean Science Trust discussed the process of establishing Marine Protected Areas (MPAs) in California, and how these place-based conservation tools can serve as scientific and political laboratories to help tease apart the effects of fishing and water quality, among other factors, on marine ecosystems. During a panel discussion of how to apply the lessons of MPAs to freshwater, the point was made that seasonal timing is very important to freshwater ecosystems, and this temporal component should inform any spatial protection in the freshwater realm.

Estuaries perhaps best embody the linkage between different aquatic habitats (saltwater and freshwater), and the conference began with an all-day symposium on estuaries. San Francisco Bay, California’s largest estuary, was unsurprisingly the most discussed estuary at the conference. A recurring theme of the estuary talks was the ongoing effort and desire to re-connect parts of the formerly vast network of intertidal habitat, which are now separated from the ocean through an extensive network of levees and flood control structures. However, as one talk highlighted, this “connectivity” of estuarine habitats to the Pacific Ocean can come at a cost, at least for the tidewater goby, a small, endangered species that inhabits California lagoons. FISHBIO Biologist Michael Hellmair presented on the recently published work of his master’s thesis that shows that “breaching” of lagoons can pose a serious risk to tidewater goby populations by causing high mortality among juveniles after the influx of saltwater. You can see his presentation below:

While the conference had a decidedly freshwater focus, one session dedicated to white sharks drew a high attendance. Researchers talked about using stable isotopes to identify shark feeding habitats during their travels in different parts of their range. And while one speaker presented that white shark attacks on humans are down from historical levels, another presented that their attacks on sea otters have inexplicably increased three-fold since 2000. Our staff also attended a day-long workshop on PIT tag antennas hosted by Warren Leach of Oregon RFID (who featured a photo of our giant PIT tag antenna array in his presentation). We even participated in the conference’s 5K Spawning Run as a prelude to our upcoming Bidwell Park 5K Salmon Run. All in all, the conference was a great chance to connect with colleagues and pay a visit to a few of our staff now living in the Santa Cruz area. We hope to continue to take advantage of our own “linkage” to this region in the future!