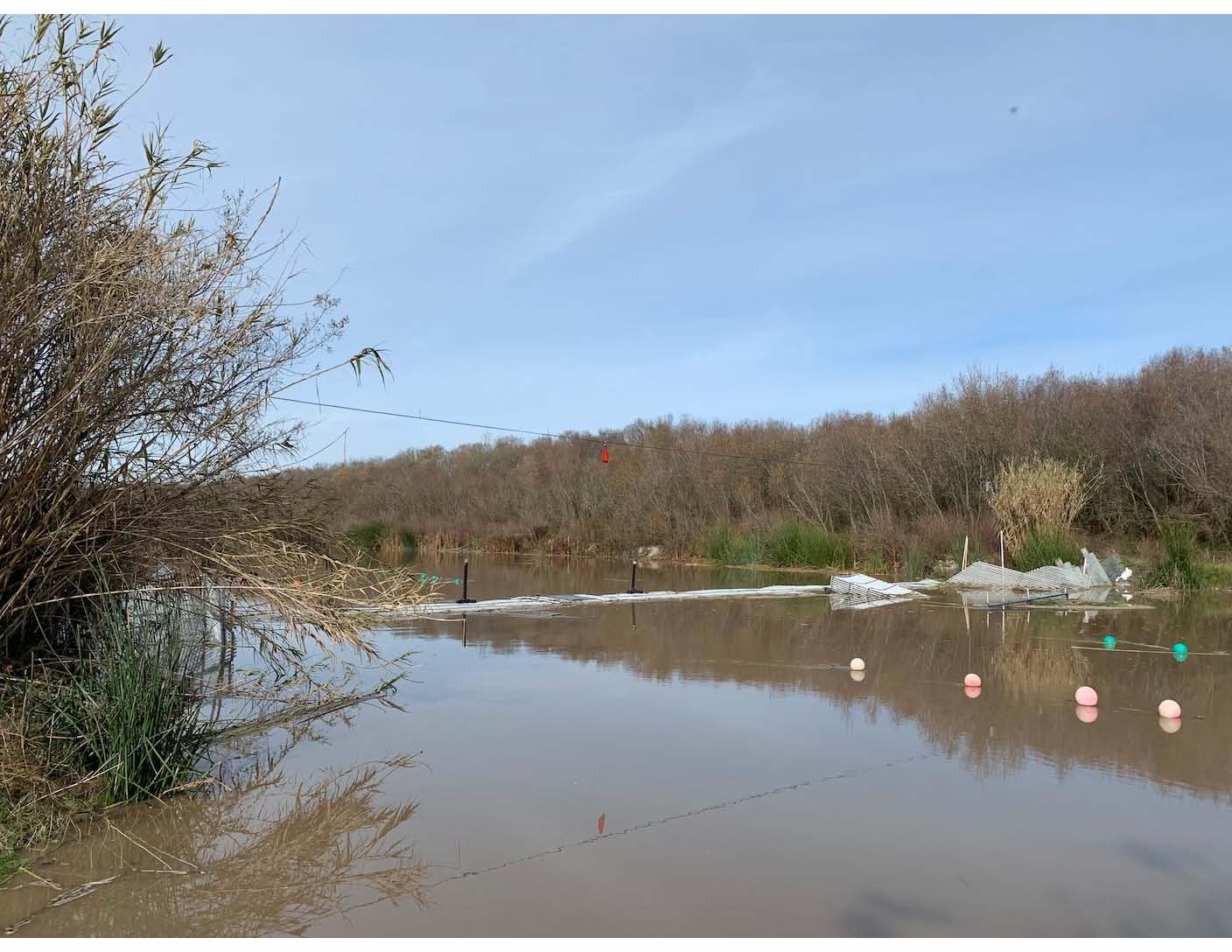 Formed by the confluence of the San Antonio, Nacimiento, and Arroyo Seco rivers, the 172-mile-long Salinas is the largest river on California’s Central Coast, and it supports a small run of threatened steelhead (Oncorhynchus mykiss). The status of this South Central California Coast Distinct Population Segment (SCCC DPS)  is of interest to both researchers and managers, and since 2011, FISHBIO has annually installed and managed a Vaki Riverwatcher-equipped fish counting weir during the steelhead spawning season to monitor these fish of concern. However, the Salinas presents some unique challenges for weir installation that require careful planning, creative problem solving, and lots of hard work by our technicians. 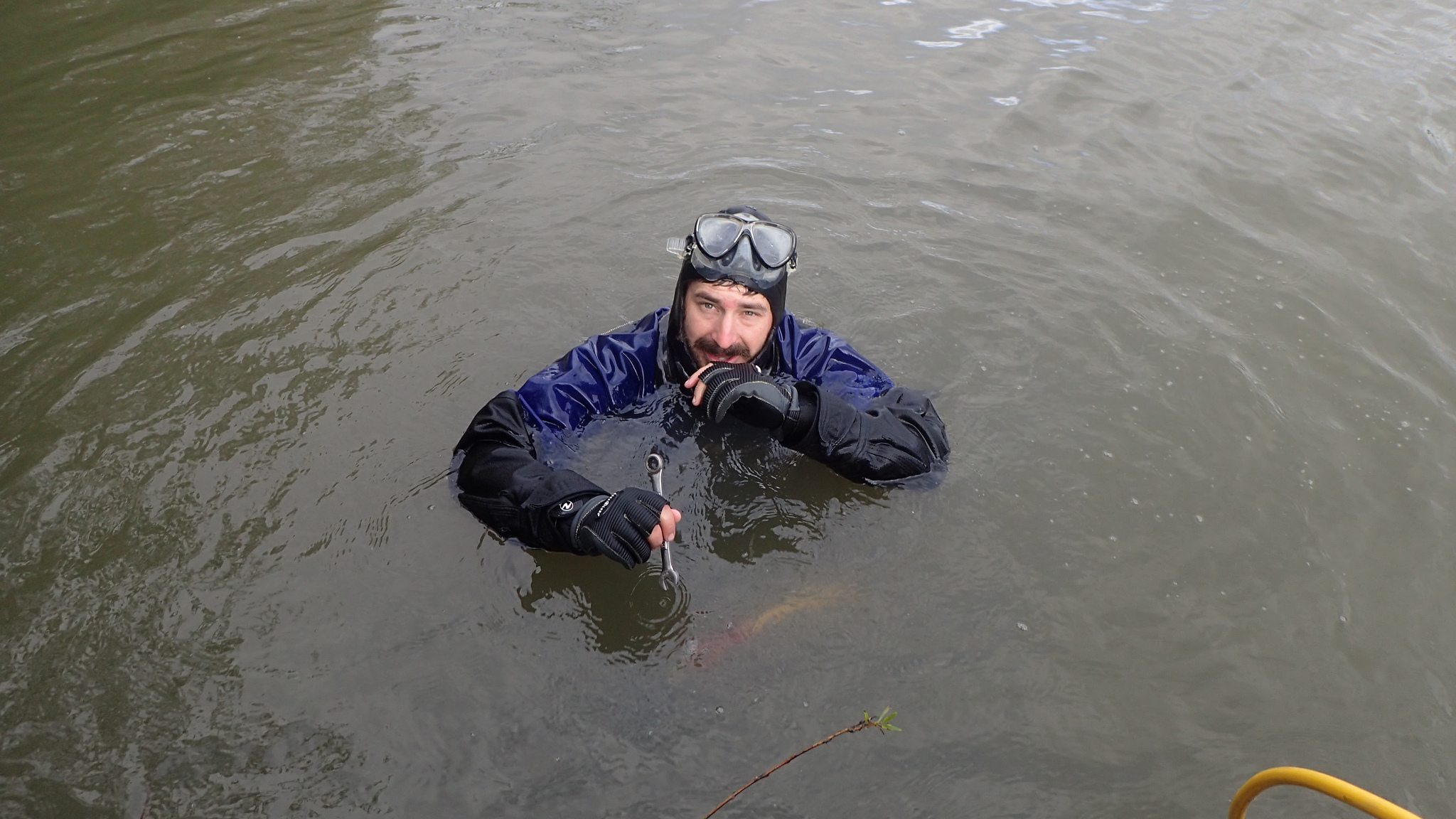 The riverbed of the Salinas is mostly sand and mud, and flows can be fast and powerful in the rainy winter and spring seasons. Both of these factors mean that securing a structure like the fish-counting weir is no easy task. The first step was to anchor a substrate rail in the muddy bottom, and then tether that rail to additional anchors that are driven deep into the riverbed through the use of a jackhammer. By using boats, ladders, and even SCUBA equipment, the FISHBIO crew is able to create a secure base upon which to build the weir. The water of the Salinas is extremely turbid, meaning that the technicians diving down to secure the rail, anchors, and panels were often working in total blackout conditions. Blinded by mud, they rely on feeling their way around, a task made more difficult by finger-numbing water temperatures of around 55°F.

The Salinas, like many rivers of the Central Coast, has a lagoon where it meets the ocean. These lagoons, which provide important nursery habitat for juvenile fish, are estuaries that remain separated from the ocean by a sandbar during the summer and fall. They only become connected if sufficient rainfall in the winter and spring creates flows high enough to breach the sandbar. Because returning adult steelhead can only enter the system once the lagoon breaches, it is important to get the weir installed prior to this event. Fortunately, the river’s lack of connectivity with the ocean meant little to no flow during weir construction, but the sand barricade at the river’s mouth also meant that water levels were very deep and it was not possible to stand in most places (thus the need for SCUBA gear). 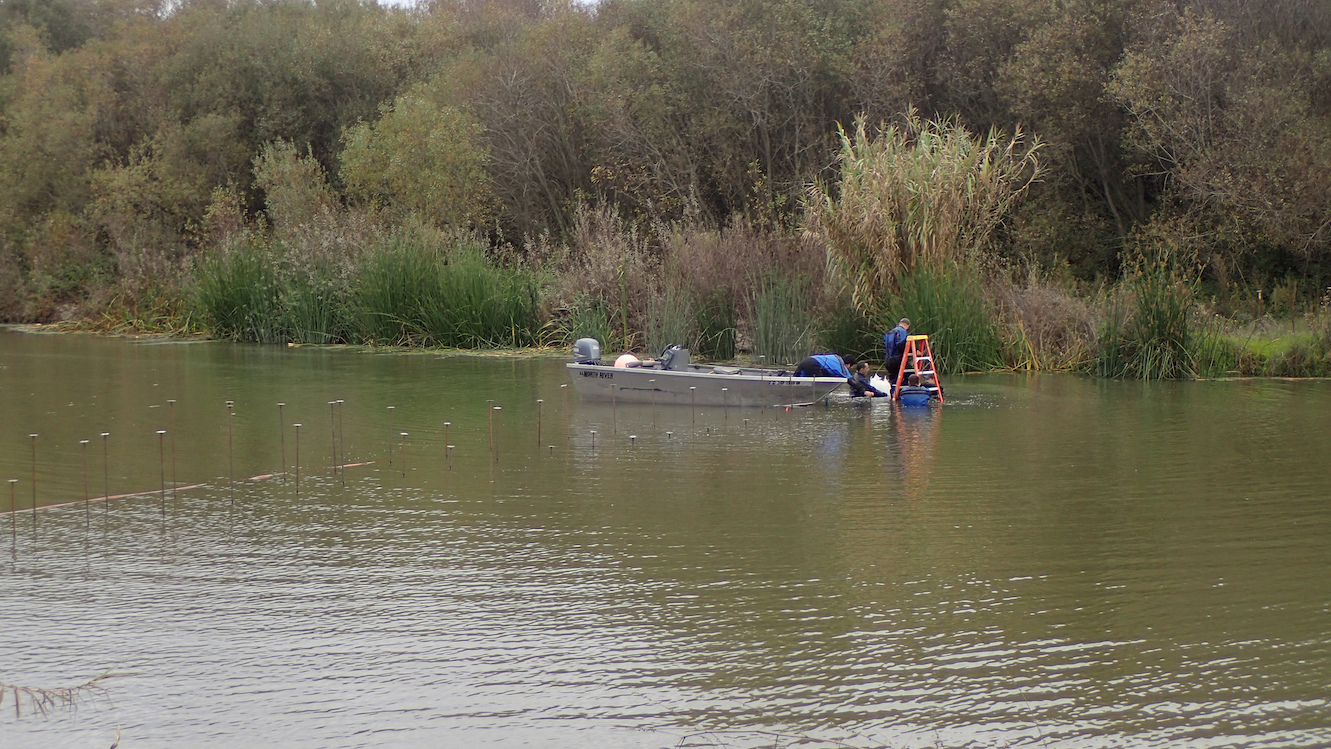 After several weeks of hard work, the weir was completed and began counting fish. Recent rains and increased flows caused the river to rise dramatically, and technicians had to monitor and clean the weir continuously for several days to ensure it was not damaged by the large amounts of debris flowing downstream. The upside to these high flows was the resulting breach of the lagoon, which made the river accessible to steelhead. This connectivity with the ocean also means that the lower river now experiences the effects of tides, and both the water depth and the direction of flow fluctuate throughout the day. So far this season, the weir has recorded striped bass, Sacramento pikeminnow, and even striped mullet, but now that the river is open to Monterey Bay, Salinas River steelhead returning to their home stream to spawn may be passing through the weir any day.