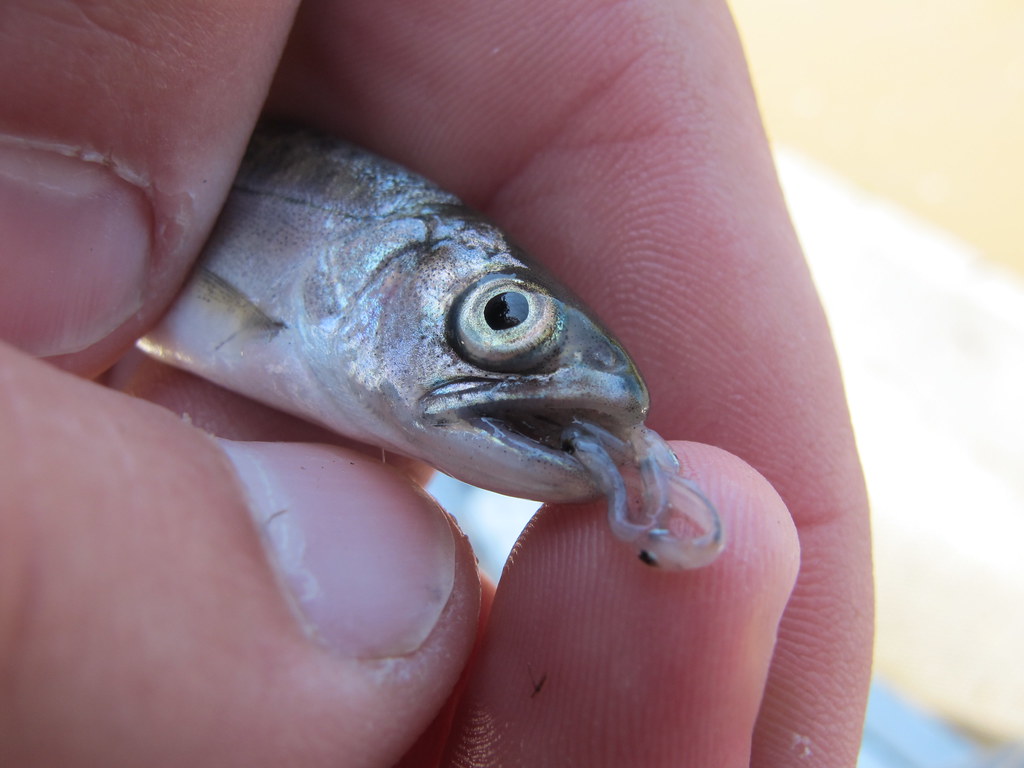 Estuaries like the Sacramento-San Joaquin River Delta and San Francisco Bay provide a smorgasbord of delicious invertebrates for the fish living there. As juvenile Chinook salmon are currently migrating downstream towards the ocean, they will try to take advantage of this extravagant snack bar, eating ravenously and growing rapidly. But one big downside to this buffet is that these feasting fish are not just diners, they’re also on the menu. Numerous predators stand between juvenile salmon and their ocean destination, and when it comes to surviving this gauntlet there are few better strategies than growing as quickly as possible. Although outmigrating salmon pass through highly productive areas like estuaries, getting the best food can still be a challenge. This is because they are accompanied on their journey by several million of their relatives, many of whom are stocked from hatcheries. Hatchery-raised fish represent a large portion of many Chinook populations, including 90% of the Central Valley population. These hatchery salmon have successfully strengthened some declining populations, but some scientists and managers have expressed concerns that producing extra mouths to feed might lead to a decline in the wild population due to increased competition. In an effort to understand these competitive forces, a team of researchers in the Pacific Northwest recently published a study that compared the diets of hatchery and wild Chinook salmon, only to find that these two groups have surprisingly different tastes in invertebrates.

The most direct way to determine what a fish is eating is to examine its stomach contents. This can help identify specific prey fish are consuming, but only provides a snapshot of their diet. Understanding how an individual’s diet changes over hours, days, or weeks would be very difficult to study using stomach contents alone, but a tool called stable isotope analysis can provide a better idea of long-term eating habits. Stable isotopes are chemical elements such as carbon or nitrogen present in the food animals eat that become incorporated into their bodies. By evaluating the stable isotope signatures of different prey types in different habitats, and comparing them to the stable isotope signature of a fish, scientists can get a sense of where and what the fish was eating over the course of its life.

By combining the dietary “snapshot” of stomach content analysis with the long-term dietary trends of stable isotope analysis, this study uncovered some differences in habitat use and diet between hatchery and wild Chinook salmon in the Nisqually River delta of Puget Sound (Davis et al. 2018). Juvenile Chinook were collected from multiple sites strategically selected to represent a variety of delta habitat types, including forested tidal freshwater areas, intertidal mudflats, and several types of salt marshes. Scientists collected fish stomach contents and tissue samples for stable isotope analysis, along with terrestrial, benthic (bottom-dwelling), and pelagic (open water-dwelling) invertebrates from the different habitat types. Meticulous laboratory and statistical analyses revealed several interesting findings. Wild fish diets included larger contributions from freshwater habitat (19–23%) than did hatchery fish (1–4%), making them more likely to feed upon terrestrial insects like flies and beetles. In fact, terrestrial prey made up 24-31% of the diet of wild fish, and just 2-8% of the diet of hatchery fish. This is significant because such landlubber insects contain much more energy than the crustaceans that made up the bulk of hatchery fish diets. What’s more, the stomachs of wild fish were on average twice as full, and contained 15% more energy than those of hatchery fish. These findings suggest hatchery fish spend more time in marine areas and less time in riverine and marsh habitat, and they don’t have access to the same energy-dense prey as the wild fish. Overall, the diets of hatchery and wild fish were quite distinct, especially once the fish grew larger than 100 mm in length.

Every delta is unique, and the trends observed in the Nisqually River may not directly apply to other systems, but the approach used in this study provides a useful method for evaluating competition for prey between wild and hatchery salmon. Furthermore, the knowledge that wild fish preferentially use productive habitats like forested tidal freshwater areas can inform the design of habitat restoration or enhancement efforts that increase available prey, and thereby improve the growth and survival of wild juveniles. Although hatchery fish may still pose risks to wild populations by decreasing genetic and behavioral diversity, this study provides some hope that at least they aren’t completely raiding the larder of their wild relatives.