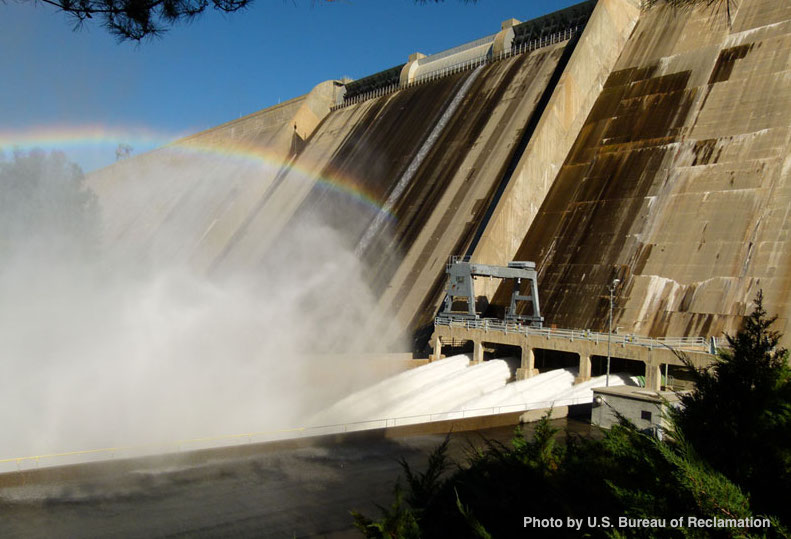 California’s San Joaquin River is the cause of some of the highest profile legal battles over water law in the state’s history. The saga started in 1927, when the California Supreme Court (Herminghaus v. Southern California Edison Co.) blocked a proposed dam in the exact spot where today’s Friant Dam is currently located. This ruling led to the statewide mandate that all water uses must be “reasonable and beneficial.” Today, the San Joaquin River is the site of one the largest stream restoration projects in the country, the multi-million-dollar San Joaquin River Restoration Program. This program stems from a 1988 lawsuit (Natural Resources Defense Council v. Patterson) challenging the impacts of Friant Dam, which revolved almost entirely around a single sentence in the California Fish and Game Code (§ 5937), stating that if a dam does not have a fishway, the dam owner shall “allow sufficient water to pass over, around, or through the dam, to keep in good condition any fish that may be planted or exist below the dam.” Both the landmark 1988 lawsuit and its 2006 settlement have profoundly shaped fisheries management in the Central Valley.

Friant Dam was completed in 1942 as part of the Central Valley Project.  The 319-ft tall dam is owned and operated by the Bureau of Reclamation and forms Millerton Lake. Two canals, the Madera and the Friant-Kern, built in 1945 and 1949, respectively, supply San Joaquin River water to 28 cities and roughly 15,000 farms. The river historically supported Chinook salmon estimated to number between 200,000 and 500,000 adults (Yoshiyama et al. 2001). In 1945, four years before peak water diversions, approximately 56,000 adult salmon returned to spawn below Friant Dam. However, after the completion of the Friant-Kern canal, the amount of water diverted from the San Joaquin left the river dry for about 60 miles downstream of the dam year-round, except for rare flood events – a situation that continued for more than 50 years. This resulted in a complete collapse of the Chinook salmon population in the San Joaquin River, with a mere 36 adults marking the last run of Chinook salmon in 1950.

As construction finished on Friant Dam and both canals in 1949, the Bureau of Reclamation entered into 40-year contracts to sell the water stored by the dam to cities and water districts. In 1988, as the original contracts were about to expire, the Bureau started re-negotiating and issuing new contracts before the U. S. Fish and Wildlife Service could give an updated assessment of the dam’s environmental impacts. That same year, the Natural Resources Defense Council (NRDC) led a group of Delta-area environmental and fishing groups to file suit against the Bureau of Reclamation, the Department of the Interior, and Friant Water Users Authority (Natural Resources Defense Council v. Patterson) over the environmental damage caused by Friant Dam. The plaintiffs argued that the Bureau violated the National Environmental Policy Act by not creating individual environmental impact statements for each contract. They further noted violations of the Endangered Species Act and the Reclamation Act, which, they argued, compelled the Bureau to comply with the section of the California Fish and Game Code mentioned above, and release water downstream to rebuild the salmon fishery in what was largely a dried-up riverbed.

The Eastern District of California heard the case and ruled in favor of the NRDC and environmental groups. The Bureau then appealed the ruling to the 9th Circuit Court of Appeals, which largely upheld the district court’s ruling. After 18 years of litigation, on September 13, 2006, the NRDC, Friant Water Users Authority, the federal government, and the state of California collectively filed a settlement agreement (NRDC et al. v. Kirk Rodgers et al.) that outlined two parallel goals to restore the San Joaquin River, 1) a restoration goal to restore and maintain a self-sustaining salmon population below Friant Dam to the confluence of the Merced River, and 2) a water Management goal: to reduce or avoid adverse water supply impacts to all of the Friant Division long-term water contractors. In future Fish Reports, we’ll take a look at what has transpired over the past 12 years in pursuit of these goals.