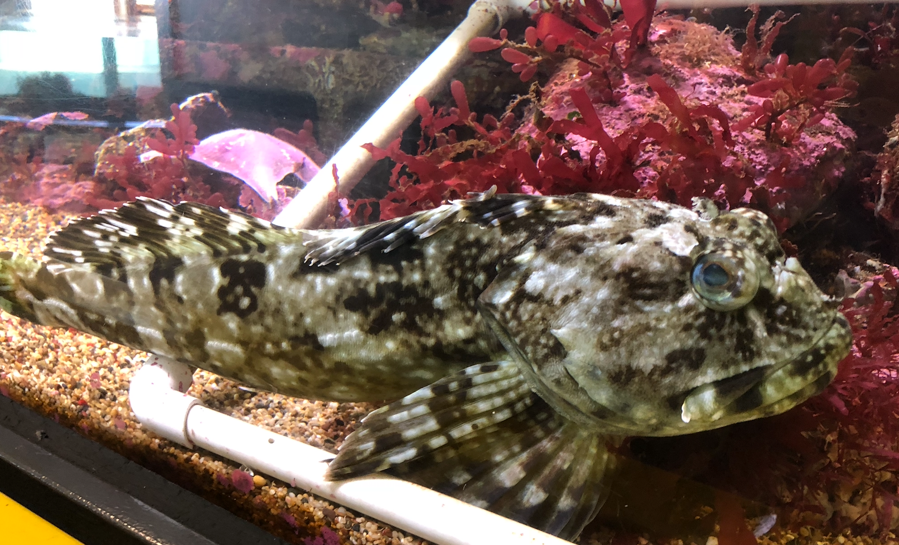 The cabezon (Scorpaenichthys marmoratus) is a unique fish living on the Pacific coast. Generally found near the ocean floor, the cabezon is known for being stubborn because of its temperament and its ability to remain nearly motionless until its next meal. They also have poisonous spines that match their attitude! Cabezon is Spanish for “big headed,” which perfectly describes this fish. They feed on a variety of foods, which essentially includes anything that can fit in its large mouth, such as squid, abalone, prawns, and other fish. Juvenile cabezon are silver in color and hide under floating kelp in the ocean. When they get older, cabezon tend to settle in tide pools and eventually make their way to the kelp forest to live out their adult lives under rocks and hiding in the shadows. The coloration of cabezon is usually brown with shades of either green (females) or red (males).

Although cabezon tend to live closer to shore, they have also been found 200 miles away from the coast. Female cabezon lay eggs that are poisonous to consume. The male cabezon tends to guard the eggs in the shallows of the coastline while other fish hide in the kelp forest. This protective responsibility makes the cabezon exposed, and more susceptible to overfishing. For sport fishers, catching a cabezon can be a great prize because of their large, meaty fillets. Cabezon are a popular target in the nearshore live-fish commercial fishery, and landings prior to 1999 suggested that a large portion of the fish were immature. Under the California Department of Fish and Wildlife Nearshore Fishery Management Plan, which was updated in 2006, the minimum size of the fish that can be kept was increased to 15 inches to protect juvenile cabezon and maintain the population size. The largest cabezon ever recorded weighed 25 pounds and was 39 inches in length, although typical cabezon are closer to 28 inches in length. Fisheries regulations help ensure that anglers can continue to catch this prized stubborn fish into the future.

This post was written by Sarkis Kasparian for an internship with FISHBIO through the UC Santa Cruz Environmental Studies Department.