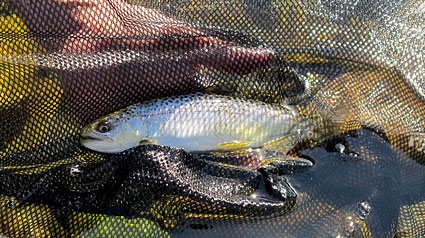 We caught this yearling Chinook salmon (Oncorhynchus tshawytscha) last Friday while angling for rainbow trout/steelhead (O. mykiss) as part of an acoustic tracking study to evaluate O. mykiss migration characteristics. The salmon yearling, about 6 inches in length (162mm), hatched last winter at the same time as the young-of-the-year migrants, which migrated out as fry, parr, and smolts between January and May. In California, Chinook populations are considered “ocean-type”, which means that the majority of juveniles migrate to the ocean during their first few months of life. “Stream-type” Chinook spend at least their first year in freshwater and are more common in northern populations. It is not known exactly what percentage of California Chinook salmon rear for a full year in freshwater before migrating to the ocean, but it is believed to be small, probably less than 1 or 2 percent of all migrants. 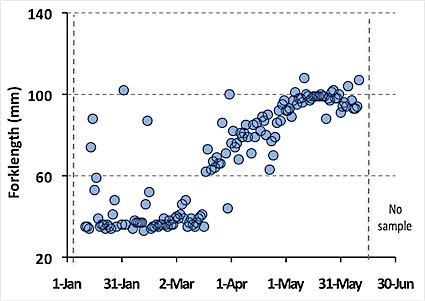 Outmigrating juvenile salmon are monitored on the Tuolumne river each winter and spring using rotary screw traps. In general, during the early winter salmon are captured as small, recently emerged fry (less than 50mm in length) and in the spring they are captured as outmigrating smolts that have reared for a few months in the river. Last winter, between January and mid-March at least 45 salmon were caught in the trap that were notably larger than the majority of juvenile salmon (fry) captured during that period. The graph above shows the daily average forklengths of salmon caught in the trap and depicts a few days in the winter of higher-than-normal average forklength, indicating that some salmon on the Tuolumne migrate out as yearlings.