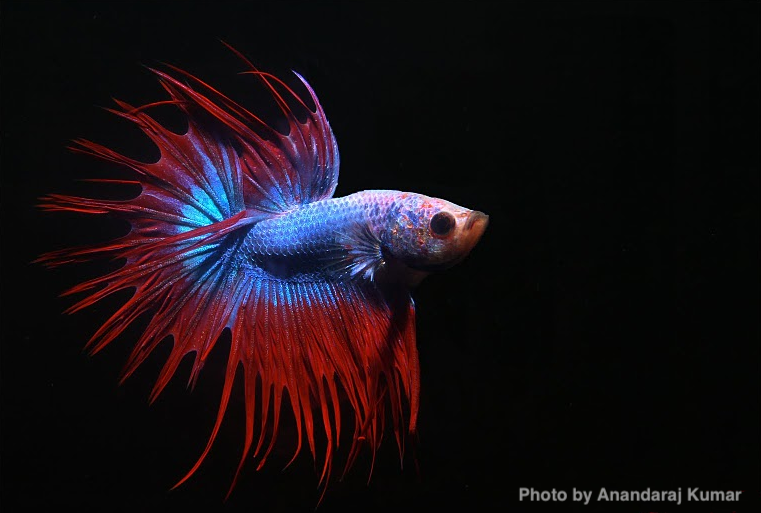 Science fiction has long imagined a future in which robots, for better or worse, play a major role. The use of robots today, however, is sometimes stranger than fiction. As robotic technologies have continually improved over the past several decades, scientists of all disciplines have increasingly used robots –  including fish biologists. Remotely operated vehicles (ROVs) and autonomous underwater vehicles (AUVs) have long been used to study life in the deep ocean. But robots have also been immensely valuable in the study of animal behavior, with everything from bee-bots to robot-chickens used to provide insight into the specific signals animals use to communicate with one another. Scientists have also developed customized fishy-robots for this purpose, such as in a recent study assessing the behaviors of male betta fish (Betta splendens) in response to different visual cues (Romano et al 2019).

Also known as Siamese fighting fish, male bettas are known for their combative nature, and will frequently engage in aggressive behaviors when they see another male of their species. To avoid physical altercations, many of these intimidating behaviors make the male look larger and more threatening, such as fin spreading and gill flaring. In highly territorial species like bettas, males will often exhibit the same initial behaviors to both males and females of their species, which can pose a risk of injury to the females. For this reason, female bettas have evolved characteristics that allow for sex recognition, but it’s not entirely clear which features males focus on. Once the male has recognized a fellow betta as a female, he will switch to courtship behaviors, including zigzagging and bubbling. Although the aggressive behaviors between male bettas had previously been assessed through the use of robots, this study was the first to use robots to examine interactions between males and females.

To help identify which specific traits the male bettas cued in on to identify females, the researchers created three different female “replicas” from silicone rubber. One of these models was left “neutral,” and given no additional features. Another was painted with horizontal lines along its body, mimicking the stripes present on female bettas. A third was given three bright stripes along its body through the use of light emitting diodes (LEDs). The robots were connected to a servo motor, allowing the scientists to give them realistic movement. Male bettas were then exposed to each replica, as well as to live male and female bettas to act as controls. Each male was tested with a different visual cue only once every seven days to make sure they weren’t altering their behaviors based on experience.

The results found that males showed little difference in their intimidating behaviors (fin spreading and gill flaring) among the different replicas and controls, but their courtship displays varied more significantly. Males zigzagged most when exposed to live females and the LED replica, and less when exposed to the live males and the neutral and painted replicas. They also bubbled more and spent more time near bubble nests they had constructed (both courtship-specific behaviors) with live females and the LED replica. These results suggest that the LED model has the best “biomimicry” of a female betta, which may be because its brightness mimics the wavelengths of light that would be reflected off the scales of a healthy female. Although more studies are needed to determine whether this is the case, males may cue in on these vibrant colors to determine if a flashy female is in good health and capable of producing lots of Grade A eggs. Let’s just hope the males aren’t crushed when they find out they’ve fallen for beautiful but heartless betta bots.