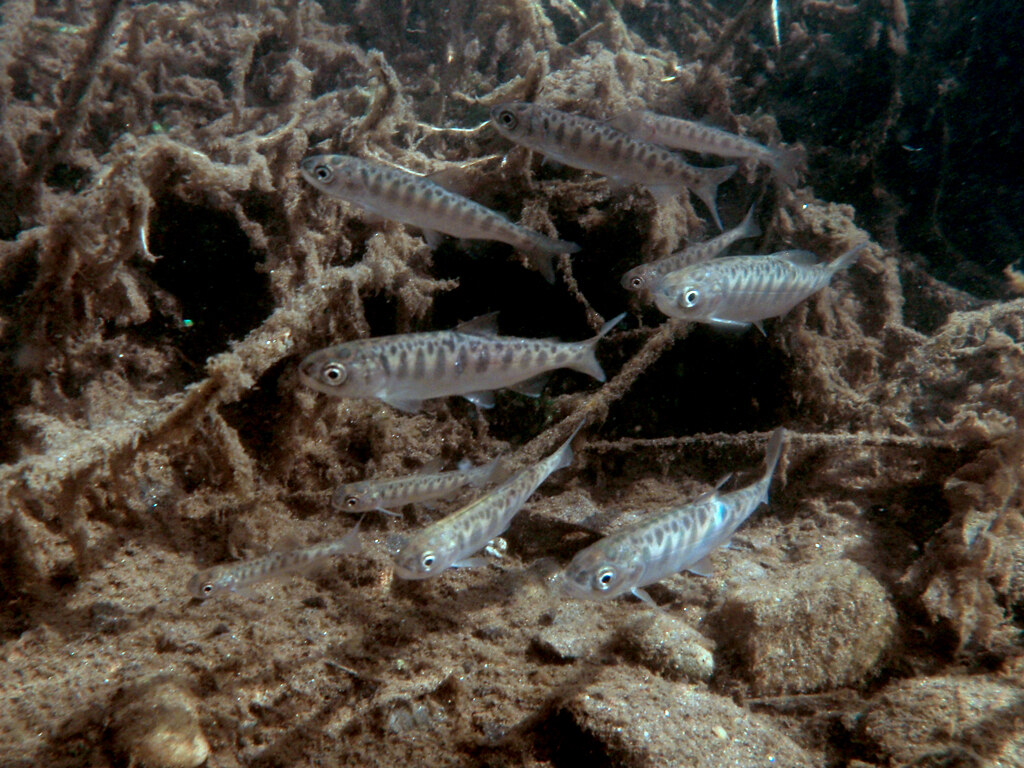 Although they spend their lives hidden beneath the surface, fish are directly affected by the weather happening outside their aquatic world. This is particularly true of species that rely on watersheds in regions like California, where the availability of water changes dramatically with the seasons. As climate change threatens to shift historical patterns in temperature and rain- and snowfall, scientists and managers are facing questions about what this will mean for freshwater fish, especially those that have adapted to use freshwater systems seasonally. Anadromous fish like Chinook salmon (Oncorhynchus tshawytscha) migrate into fresh water to spawn, and their offspring spend the first stage of their lives rearing in rivers, floodplains, and estuaries. As a coldwater species, sensitive juvenile Chinook cannot tolerate the blistering summer temperatures of California’s Central Valley rivers, meaning they have a limited window during the year to rear in California’s freshwater nursery habitats. Now, the findings of a recent study in the journal Ecological Applications suggest this critical window may be shrinking, causing salmon to leave fresh water sooner and at smaller sizes (Munsch et al 2019).
“Phenology” is a term ecologists use to describe the cyclic and seasonal patterns of natural phenomena. For example, birds may time their nesting to occur when the most insects will typically be available, and in turn insects may time their life cycles to coincide with the season when plants begin to produce new leaves. Phenology is nature’s calendar, and all types of organisms rely on cues from the environment to “schedule” important processes in their life cycles. This is especially true for Chinook salmon, as the migration of adults from the ocean back to their natal streams to spawn is tied to a season. Fall, late-fall, winter, and spring runs of Chinook salmon each time their migration to coincide with the season that provides their offspring the best chance of survival given the location of the spawning stream. The second time-sensitive life cycle event is the outmigration of juvenile Chinook from the natal stream down to the ocean. Because juveniles cannot survive in warm water, they have to time this outmigration to balance the benefits of rearing in freshwater with the risk of exposure to high temperatures. The recent study sought to address the timing of this outmigration in relation to environmental conditions.
The researchers focused on the lower Sacramento River and the Sacramento-San Joaquin Delta, systems in which river conditions are largely constrained by water stored in reservoirs. Shasta Dam, for example, impounds the largest reservoir in the state, which is fed by snowmelt and rain. In the summer, the deeper portions of the reservoir act as a “cold pool” that provides cool water to maintain downstream temperatures suitable for juvenile rearing. The authors used environmental data from the reservoir in concert with data on juvenile Chinook presence, the size of juveniles captured just before entering the ocean, and water quality information from sample sites to investigate the effect of seasonal climate patterns on the phenology of juvenile Chinook outmigration. The results revealed that the spring environment varied substantially among years, and was affected by the conditions of the previous winter. Notably, for each 1˚C increase in water temperatures in April, juveniles were found to enter the ocean 4 to 7 days earlier, which led to a 2.14 mm decrease in the maximum size of outmigrating individuals. This meant that in the warmest years, the maximum size of outmigrating juveniles was 8.01 mm smaller than in the coolest years, and this smaller size may make juveniles more vulnerable to ocean predators.
Overall, the study found that winter temperatures and precipitation had the biggest influence on the window of time in the spring during which juveniles could make use of nursery habitats in Central Valley watersheds. The Chinook inhabiting the Central Valley are at the southernmost end of their range, and thus are already restricted to rearing during the coolest part of the year. Because California winter temperatures are expected to increase and snowpack is expected to decrease substantially by century’s end, Chinook populations may be at risk of experiencing increasingly warm, dry winters. The authors of this study suggest that nursery habitats in the lower watersheds of the Central Valley may be enhanced by allocating releases of cold water from reservoirs, which may prolong water quality conditions suitable for rearing. However, more studies are needed to determine how spending less time in fresh water affects salmon survival from fry to adulthood. Keeping baby salmon cool may be key to ensuring the persistence of the species in a warming world.
This post featured in our weekly e-newsletter, the Fish Report. You can subscribe to the Fish Report here.