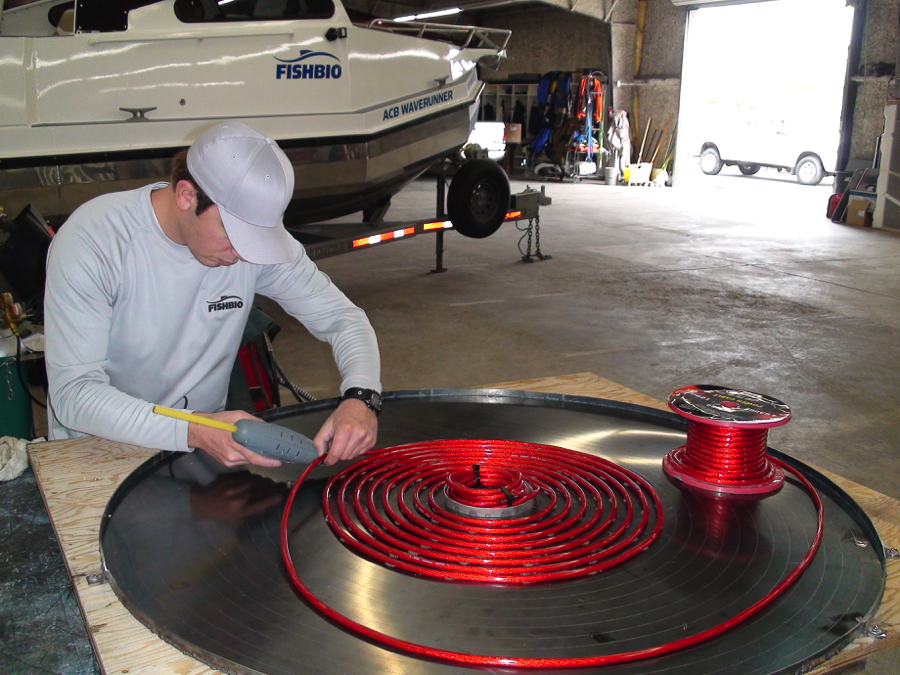 We are always surprised at the innovations that professionals in fisheries, wildlife, and technology come up with in the design and uses of Passive Integrated Transponder (PIT) tag antennas. PIT tags have been used worldwide to study a variety of wildlife species, but their first prominent use in fisheries management was to monitor salmonid survival through the hydroelectric system in the Columbia River. Typical uses are to deploy an antenna array in a stream or river so that tagged fish either swim through or over the antenna. Alternatively, antennas have been integrated onto floating rafts and boats so that they can be floated over tagged fish in shallow rivers, or are mounted on backpacks to detect tagged fish in small creeks. In the marine or estuarine environment, researchers from the Pacific Northwest previously deployed a detection antenna on a surface trawl and were able to detect nearly 30,000 PIT-tagged salmon and steelhead smolts in a six year period. PIT tags have allowed researchers to gain valuable information not only on their species of interest, but also on important ecological processes, such as avian predation of salmonids.

While most applications of PIT tags typically attempt to answer large and complex questions, there are also small-scale applications that PIT tags can be used for, especially in laboratory or aquaculture settings. In one such study, FISHBIO designed a unique PIT tag antenna to evaluate the gastric evacuation rates of striped bass in the laboratory, specifically those that had consumed acoustically tagged Chinook salmon smolts. The gastric evacuation rate is the amount of time it takes for a meal to be digested and excreted from a fish. We were interested in estimating this rate to figure out how long acoustic tags from tagged Chinook salmon remain inside predatory fish, such as striped bass, after the predator consumed the salmon. Recent acoustic tagging studies in the Sacramento–San Joaquin River Delta to evaluate juvenile Chinook salmon survival have shown a significant issue of predation on these tagged salmonids, which can affect the conclusions of the studies.

The main problem is that even after an acoustically tagged salmon is consumed by a predator, the tag can still be detected by acoustic receivers or listening stations. While differences in swimming behaviors, such as direction and movement patterns, can be used to differentiate between the acoustic tag signals from a live smolt and a preyed-upon smolt, these methods can be unreliable at times. Knowing how long consumed acoustic tags remain inside predators before they are excreted can help adjust acoustic tag data to account for predation events—essentially, removing the period of data that reflects the movement of the predatory fish instead of the tagged juvenile Chinook salmon.

FISHBIO staff used PIT tags to help answer this question by designing and constructing antennas to cover the base of round laboratory aquarium tanks. The unique half-duplex PIT tag antennas were constructed in a flattened coil pattern that could detect a PIT tag sitting anywhere on the bottom of the tanks, a design we had not previously seen elsewhere. We also designed a dummy acoustic tag of the same shape and material of an acoustic tag, but with no acoustic transmitter, due to cost. We outfitted this dummy acoustic tag with with a 23-mm PIT tag, and attached this PIT-acoustic tag combination to hatchery juvenile Chinook salmon. The tagged fish were fed to striped bass in the laboratory tanks equipped with PIT tag antennas. After the meal was digested and the PIT tagged-acoustic tag was excreted, the tag would drop to the bottom of the tank, where it was detected by the coiled antenna. The total evacuation time could then be calculated for each feeding trial. This unconventional antenna design provided a novel method for collecting precisely timed scientific data to inform the study of salmon predation.