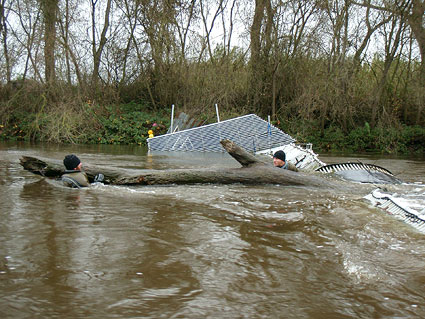 The recent rain and snow has caused a lot of problems for holiday travelers throughout the country this past week, and the impact of the bad weather on the working schedules of fisheries biologists should not be overlooked. High flows have many impacts on stream and riparian environments, including transporting large debris downstream. In this case, FISHBIO biologists assist a tree on its downstream journey past a fish counting weir. One of the primary benefits of a collapsible fish counting weir is that large debris and high flows do not result in a blowout of the weir. Rather, the weight of debris and force of flowing water cause the weir to collapse, which often allows debris to pass downstream over the top of the panels on its own. In some cases, such as this one, biologists need to lend a helping hand.

Many years ago, fish and wildlife agency biologists often cleared streams of large woody debris thinking that it only caused a hazard for river traffic. However, the importance of woody debris to salmon and trout habitat has become well established over the last two decades. Woody debris serves many purposes for salmonids, including providing slow water refuges and cover from predators; facilitating creation of pools and spawning habitat; offering feeding stations and enhanced food production; preventing bank erosion and increasing channel stability; and generally increasing stream habitat complexity.