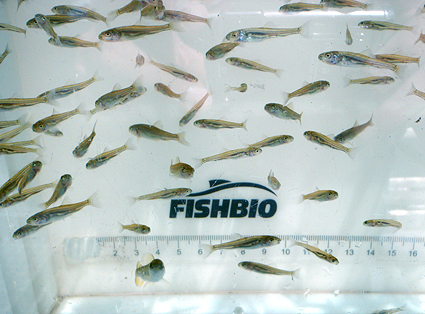 On this day we caught hundreds of juvenile Sacramento suckers (Catostomus occidentalis) and a lone trout. These juveniles are only a few months old, but they grow surprising fast on a diet of detritus, and within 4-6 years will be sexually mature and ready to spawn. Triggered by an increase in water temperature Sacramento suckers will spawn in schools, sending fertilized eggs down into the substrate and out into the current. The eggs hatch in 2-4 weeks and the young often get swept downstream in the current. Juvenile Sacramento sucker have an anterior terminal mouth and feed on detritus. As adults they develop the characteristic inferior sucker mouth and have a diet made up of mostly algae, invertebrates, and detritus. 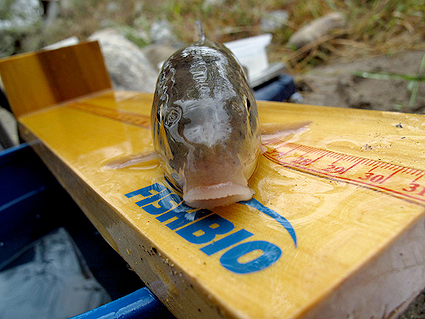 Sacramento suckers are commonly found in cool clear streams and lakes throughout Sacramento-San Joaquin drainage in southern Oregon and California. They are occasionally taken by bait fishermen but they are usually discarded. Trout fishermen often accuse them of disturbing trout redds and eating eggs but are believed to be of little harm and the young suckers provide food for trout. In fact, Sacramento sucker were an important traditional food source to Native American tribes of Northern California. The native Ajumawi people in the Pit River basin even designed fish traps to harvest and even manage the Sacramento sucker fishery.