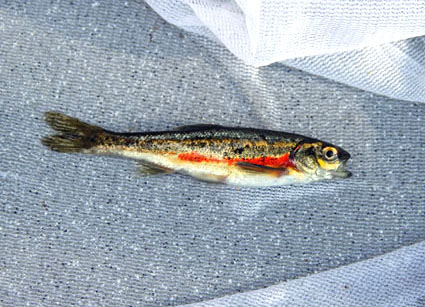 Lahontan redsides, Richardsonius egregius, are a small skinny cyprinid minnow endemic to lakes and streams of the Lahontan Basin in California and Nevada. We captured this one recently, obviously in spawning colors, while electrofishing a reservoir. Redside e-fishing abundance was related to habitat, with fish most abundant over gentle gravel banks.

Redsides are named for their bright red spawning condition colors, which usually occurs from late May to August in schools of 20-100 fish along sand and gravel bottoms of stream pools and lake margins. Their diet consists of benthic insects and algae, but they have been known to eat Tahoe sucker eggs as well. Introduced brown trout have been noted to prey heavily upon the redside and limit their populations where the two species overlap.