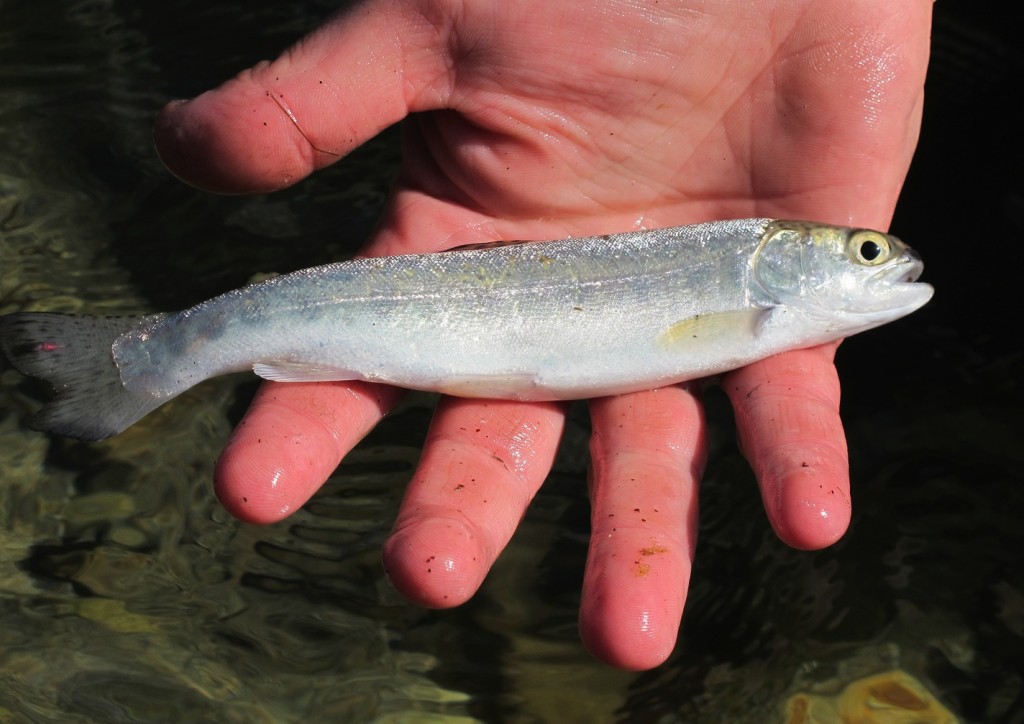 Every juvenile rainbow trout (Oncorhynchus mykiss) living in California’s Central Valley has in its genetic makeup the ability to out-migrate to the Pacific Ocean and become a steelhead trout. Historically, this ability has allowed O. mykiss to survive catastrophic events, such as drought. However, these days there is little incentive for O. mykiss to develop into steelhead: the path these fish must navigate to the ocean now teems with introduced predators and offers little good habitat for rearing along the way. Federal and state management practices have also created an environment that favors O. mykiss to stay in their natal streams, maturing into adult rainbow trout instead of steelhead.

Before dams were built, rivers along the West Coast of the United States were entirely influenced by local climate conditions. As snow packs melted in the spring, rivers and streams would swell quickly and provide an ideal opportunity for out-migration. As spring turned into summer, river levels would taper off, eventually leading to just trickling streams in early fall. These natural conditions caused fish to leave their natal rivers and migrate to the ocean to survive. Fish that could adapt to an adult life at sea were heavily favored and could grow much larger in the ocean where food sources were abundant (Wilson 1997). However, predation in the ocean was also much greater, so fish adapted by returning to reproduce in their natal streams, where predation was historically less intensive. In addition to the development of an anadromous life history, O. mykiss retained the ability to live entirely in freshwater. This dual life history pattern of steelhead and rainbow trout makes the species more adaptable to changing environmental conditions (McEwan 2001). In fact, it is typical to have both life history patterns occurring in the same stream, and resident and anadromous parents can produce offspring of both varieties (Courter et al. 2013).

Steelhead populations are now beset by numerous challenges: impassible dams block access to 80-95% of historically available steelhead habitat, alteration of downstream river channels has greatly reduced the rearing habitat of out-migrating juveniles, and many intentionally introduced predator species, like large and smallmouth bass, make the environment even more inhospitable (Lindley et al. 2006). Furthermore, unlike the historically dry conditions in most Central Valley streams during early fall that would prompt O. mykiss to migrate to the ocean, current water management practices include water releases from dams throughout the year, creating an environment that favors juvenile O. mykiss staying in their local streams year round.

California Central Valley steelhead are currently categorized as a Distinct Population Segment (DPS) that is listed as “threatened” under the Endangered Species Act. This DPS includes all anadromous O. mykiss that spawn naturally below dams in Central Valley streams, as well as fish produced by the Feather River Hatchery and Coleman National Fish Hatchery. But the health of the population has seen little improvement since the listing, leading scientists to call for policies and management that better reflect the reality of the steelhead’s genetic and ecological situation. For example, most of the steelhead in the Central Valley now come from hatcheries, and the genetics of the hatchery fish bear the signature of stock from the Eel River, making these fish more closely related to coastal steelhead than to their rainbow trout counterparts in the Central Valley above the dams (Nielsen et al. 2005). It might make more sense to include populations of above-dam rainbow trout in the steelhead DPS, since these fish possess perhaps the truest remaining Central Valley steelhead genetics. Despite modifications to the environment that favor a resident life history, Central Valley steelhead have still managed to survive – but it is important to recognize the current steelhead population is simply not the same as it was historically.