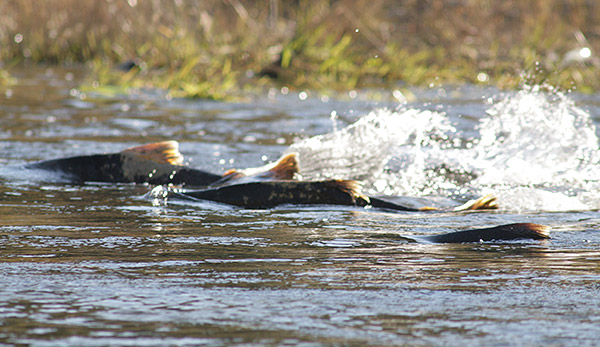 Both spring- and fall-run Chinook salmon have been returning to the Sacramento River system in higher numbers this year than in recent years.  The Feather River Hatchery (FRH), the largest contributor of spring-run hatchery fish in the Central Valley, expected to meet their quota of 2,000 spring-run Chinook by early September. This should allow for the production of approximately 2 million juvenile salmon. The FRH is also responsible for producing up to 6 million juvenile fall-run Chinook salmon.  Since the hatchery was built in 1967, outdated hatchery practices have allowed intermixing of the two runs to a point where there is no longer a clear distinction regarding which run a fish belongs to when they enter the hatchery in the early fall.  The resulting hybridized spring- and fall-run is often referred to as the “tweeners” because they come up the river to spawn late for a spring-run fish, but early for a fall-run fish. This introgression between runs has resulted in a loss of genetic diversity, which is a concern for the threatened spring-run.

Historically, spring-run Chinook salmon entered the Feather River in the spring and summer during higher flows caused by snowmelt, and were able to ascend the upper reaches of the rivers where they would hold in cool, deep pools until they spawned in the early fall.  Fall-run Chinook enter freshwater in the early fall and spawn shortly after they reach the spawning grounds.  Prior to the construction of dams, there was little concern over the two runs intermixing since the upper spawning reaches became inaccessible by fall due to diminishing flows.  However, today with the lack of higher elevation spawning habitat, the spring-run Chinook are utilizing the same spawning grounds as the fall-run Chinook.

Since spring-run targets were presumably reached by mid-September at the FRH and the runs were expected to be high for both spring- and fall-run Chinook, employees at the hatchery were instructed to cull the “tweener” Chinook coming into the hatchery (i.e., kill them without harvesting their eggs) rather than killing them after they are spawned. This was the first step in an attempt to restore the two distinct runs of salmon in the river. Normally, the hatchery would use a date (i.e., September 25) as a cut-off to distinguish between the two runs; however, this method has not been effective, as noted in the recent California Hatchery Review Report.  The euthanasia of fish occurred for approximately two and a half weeks, during which an estimated 10,000 or more fish were killed.

This year, the inland recreational salmon fishing season was a highly anticipated event, and this new protocol of culling fish from the population has created significant controversy with fishermen.  Salmon fishing was restricted for several years in Central Valley rivers following the 2006 crash of the fall-run Chinook salmon, and now the fishermen feel they are owed the opportunity to catch these fish rather than simply killing the fish during the “tweener” period.  Although the FRH donates the meat from the slayed salmon to local food banks, there should be plenty of meat to donate if they reach their targets for both runs of fish.  Perhaps, increasing the bag limit in the Feather River during the “tweener” period would satisfy the fishermen as well as help achieve the goal of separating the two Chinook runs.