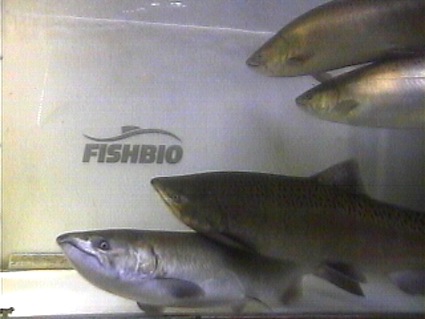 Once you have a Fish Counting Weir how will you actually count the fish? A fish weir essentially creates an artificial fish barrier in the river and only allows fish to pass through a designated opening in the weir. You have some options when it comes to gathering fish passage data. A person can manually count fish passing over a light colored background, as they have done for years in parts of Alaska, but this is both labor intensive and expensive, not to mention boring. Another alternative is to mount a PIT (passive integrated transponder) tag antenna on the weir to monitor tagged fish as they pass, however this will only detect fish that have been previously captured and tagged. Video monitoring is another possibility, however this usually entails many hours of reviewing video while recording data. Trapping the fish temporarily in the live box and manually counting them is accurate, but in general it is not practical to handle every fish migrating upriver. 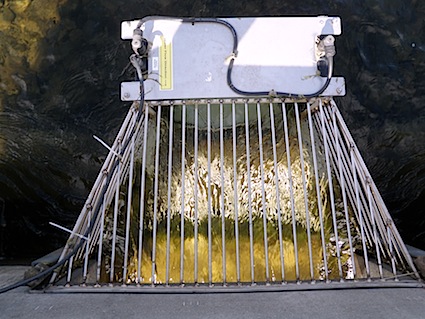 Vaki Aquaculture Systems Ltd. in Iceland has developed an electronic fish counting system, the Riverwatcher, which was designed for use in fish ladders and other fish ways, but works nicely with a fish counting weir. The Riverwatcher system has been used in conjunction with the Stanislaus River weir since 2003 and has provided essential data, which would have been difficult to obtain otherwise. The base unit operates on a 12-volt power supply and is ideal for remote applications in conjunction with a battery and solar panel. 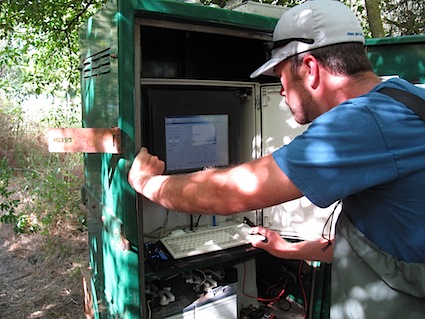 The basic Riverwatcher consists of an in-river scanner unit and a control unit housed in a weatherproof enclosure on the bank of the river. The scanner consists of two plates mounted vertically in an aluminum frame with an opening 12 inches wide and 22 inches high. When a fish swims between the scanner plates the infrared beams are broken and a silhouette image of the fish is generated. Riverwatcher units can also be set up in conjunction with a digital camera recording video or still images. The data (silhouette, size, date, time, speed, water temperature and digital images) are sent to the control unit where the information is stored. 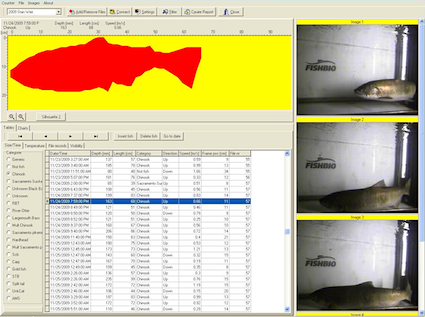 The data files can be downloaded from the control unit as frequently as needed. Vaki provides a database software (WinAri) for processing the data, which can display data associated with each fish passage. The user can utilize both the infrared silhouette and photos or video to identify the species and gender of each passing fish. Since data are only collected during a passage, unlike video monitoring, the user does not have to watch hours of video to locate fish passages and collect data. The program provides tools to evaluate run size, timing, fish size classes, and associated environmental factors. The database can also be exported from WinAri and evaluated further using a different data analysis program.