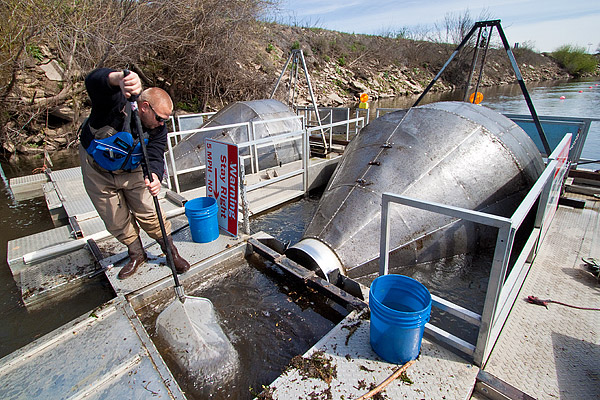 After a salmon is hatched from the gravel of the riverbed in the upper reaches of a watershed, it will begin a long and difficult journey out to the ocean where it will mature before returning to the stream to spawn. When juvenile salmon are migrating out to the ocean it is important to monitor both the quantity and quality of the fish that are being produced in the streams so that biologists can better evaluate how various watershed activities and management strategies are influencing the salmon. There are many different methods used to sample outmigration, but one of the preferred methods is the use of rotary screw traps (RSTs). Sampling the small outmigrating juveniles can be difficult, but RSTs can simplify the process of estimating abundance because you are constantly sampling a portion of the run throughout the entire outmigration season.

There are a variety of different calculations you can use to estimate efficiency of the RST, which is then used to estimate the abundance of outmigrating salmonids from the trap catch. The simplest method is based on an estimate of the percent volume of water sampled by the trap. This is calculated by determining the amount of flow that passes through the trap’s cone relative to the volume of water flowing in the channel. If the salmonid catch is low over the course of the season and mark/recapture experiments are not possible, then this is one of the few options available, but the problem with this method is that it assumes that fish are evenly distributed throughout the water column, and does not factor in fish behavior. 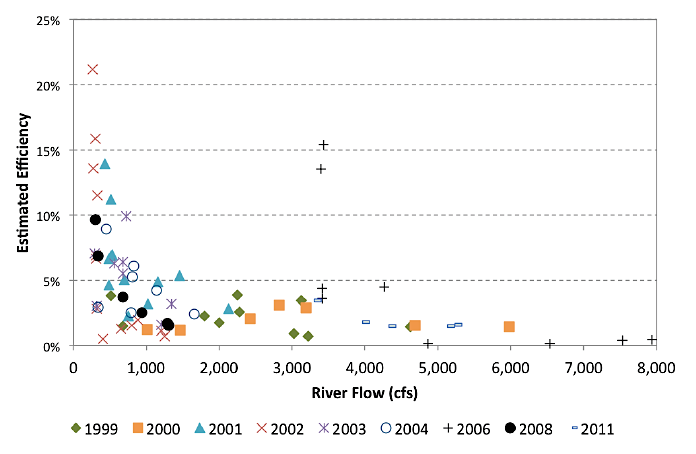 Figure 1. Trap efficiency estimates observed at the lower trapping location on the Tuolumne River relative to river flow at Modesto (MOD), 1999-2008 and 2011.

Regressions have been valuable in estimating abundance at one of our trapping locations on the Tuolumne River because in some years catch can be too low to properly conduct mark/recapture experiments. When this occurs we are able to use catch, fish size and flow data collected from previous trapping seasons to estimate the daily trap efficiency and fish abundance for the trapping location (Figure 1). For example, in 2009 and 2010 there were not enough fish captured to conduct trap efficiency experiments, but by using a regression based on years of experiments we can confidently estimate abundance for those years.