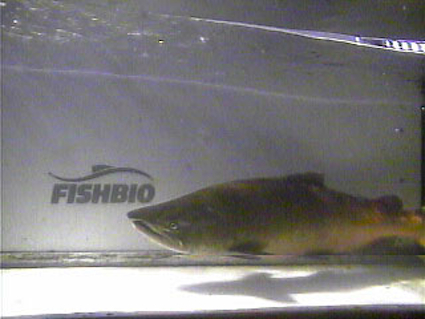 Word has gotten out about Fall-run Chinook salmon returns on the West Coast. While many regional newspapers are reporting higher returns in 2010, sometimes it is difficult to grasp the ‘big picture’ from these articles. We’ve talked to many people who are curious to know what is going on, not just on their local river, but all along the West Coast. We’ve put together some numbers to help describe the bigger picture. In most regions, carcass surveys are used to estimate escapement for Fall-run Chinook and data for these surveys will not be available until the end of the season; however, on a small number of rivers there are programs that provide daily passage counts from weirs or fish ladders, which provides year-to-date estimates of Fall-run passage that can be examined before the season is over.

As of today (10/27/2010), returns are looking better in the Central Valley of California as compared to 2009; however, comparisons with previous years vary by river. In the San Joaquin basin, at the southern most region of current Chinook salmon distribution, Fall-run salmon counts are generally slightly higher than previous years, but still far below passages seen in the early 2000s. On the Mokelumne River, passage is monitored at the fish ladder on Woodbridge Dam, and this year 2,233 salmon (as of 10/19/10) have passed the dam, over three (3) times the passage during the same period in 2009 (655 salmon as of 10/19/09; see graph). During its second year of operation, 410 salmon have been recorded at the Tuolumne River weir (as of 10/24/10), which already exceeds the total passage for 2009 (through 12/31/09) of 262 salmon (see graph). In contrast, the net passage to-date on the Stanislaus of 538 salmon (as of 10/24/10) is similar to, or just below the three most recent years (see graph). 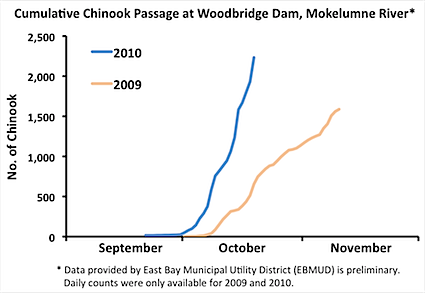 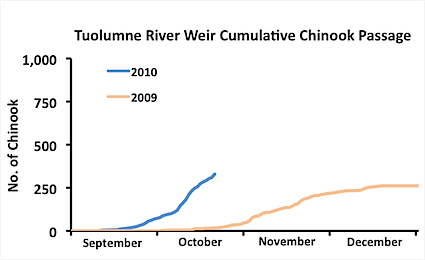 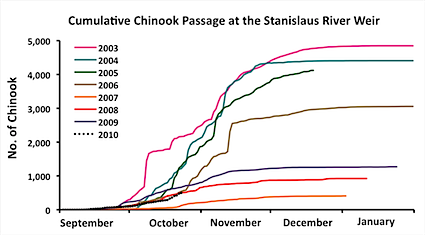 In the Sacramento River basin, passage counts at Battle Creek are up to 9,996 (as of 10/18/10), already exceeding last year’s total of 8,268, but still several thousand shy of the 14,925 that passed in 2008 and well below the runs from 2003 and 2005 (see graph). Note the similarities in the shape of cumulative annual passages on the Stanislaus River (San Joaquin basin) and on Battle Creek (Sacramento basin); in both cases, the daily cumulative passage trend for this year seems to be tracking closely with passage in 2008 (note: different values on the y-axes between rivers). 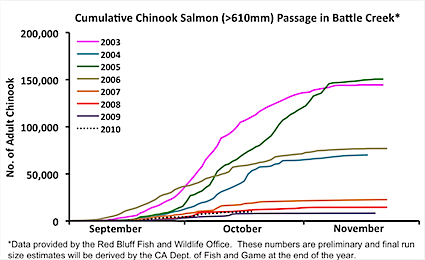 Further north, at Bonneville Dam on the Columbia River, the picture is more clear and passage has already exceeded the totals from the past five (5) years, approaching counts from 2003 and 2004. Last year, a total of 283,691 Fall-run Chinook adults were recorded and this year the count is already up to 465,376 as of October 24th (see graph). According to The Columbian, Oregon state biologists predicted that around 652,700 Fall-run Chinook would return to the lower Columbia River. 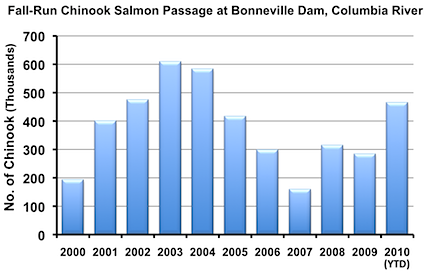 Even further north in the Gulf of Alaska, fisheries observers have reported substantially higher than usual bycatch of Chinook (“King”) salmon in the pollock trawl fishery last month, indicating that there are likely more Chinook salmon in the region. Since salmon incidentally caught in the Gulf of Alaska could be from endangered stocks along the Pacific Coast of the continental U.S., these numbers may lead to tightened bycatch restrictions in the future.

The higher salmon returns being seen this fall are not entirely unexpected. Using ecosystem indicators such as large-scale oceanic and atmospheric conditions in the North Pacific and the abundance of certain types of plankton off the coast of Oregon and Washington, researchers at the National Marine Fisheries Service (NMFS) produce annual forecasts of adult salmon returns. The forecast for this year’s Fall-run Chinook salmon looked rosy, in part due to improving ocean conditions during 2007 and 2008 (Peterson et al. 2010). Positive signs for Chinook salmon returns included unusually cold sea surface temperatures in the winter of 2008, and a high abundance of northern copepod, which are small, lipid-rich crustaceans that may be an essential food source for many coastal fishes through the winter.

If this post has you reaching for your rod and tackle, check out your local regulations (DFG). In the Central Valley, in-river Fall-run Chinook fishing is open for the first time in three years. Fishing will be allowed on parts of the American River (from the SMUD power line crossing at the southwest boundary of Ancil Hoffman Park downstream to the mouth) from Oct. 30 through Nov. 28, and the Sacramento River between the Deschutes Road Bridge to 500 feet upstream from Red Bluff Diversion Dam from Oct. 9 through Oct. 31, or from 150 feet below the Lower Red Bluff (Sycamore) Boat Ramp to the Hwy 113 bridge near Knights Landing from Oct. 9 through Dec. 12.