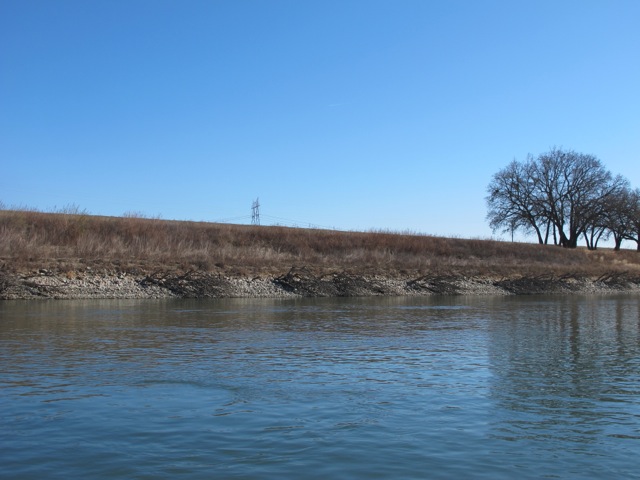 The Sacramento Valley as we know it today is actually an artificial creation, sustained by an intricate system of levees. The construction of levees has enabled engineers to restrain the flow and path of the Sacramento River, making a once flood-prone river both more manageable and predictable. This predictability, in turn, has paved the way for the permanent and widespread settlement and cultivation of the Sacramento Valley. Today, a large percentage of the valley’s most productive and populated areas owe their existence and livelihoods to levees.  The development of the Sacramento Valley truly is intertwined with the story of its levees. 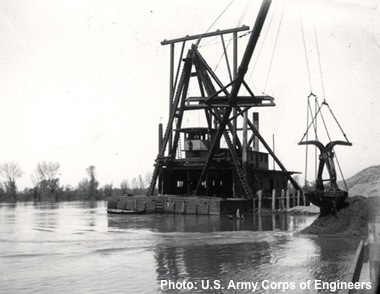 One hundred and fifty years ago, the valley looked very different: it possessed few inhabitants, and the meandering Sacramento River caused regular floods. These floods allowed the valley to flourish—marsh lands dominated the river flood plain, and perennial grasslands and oak forests dominated the drier areas. The 1849 California Gold Rush changed all that. It brought two things, en masse, to the flood-prone Sacramento Valley: mining and settlers. In 1852, hydraulic mining came into vogue, and miners blasted away entire hill- or mountainsides in order to find gold. The sediment produced by the runoff raised the Sacramento River riverbed, decreasing the amount of water the river could carry and resulting in an increase in flooding.  Although hydraulic mining was prohibited after 1884, flooding remained a fact of life. Flooding would not have been much of an issue if only a handful of people lived in the Sacramento Valley, but by 1850, this was no longer the case.  The Gold Rush resulted in a wave of settlement throughout the valley.  When the Sacramento overflowed its banks or changed its course—which it did frequently—it devastated towns and farmlands alike, prompting farmers and urban residents to experiment with a trial-and-error system of levees. Early levee systems, which were constructed on an individual basis, were too fragmented to be effective. From 1850 to 1900, there existed no overall flood control plan for the Sacramento Valley.

Residents did not turn to the government for flood protection until the devastating floods of 1907 and 1909.  The Flood Control Act of 1917 created the Sacramento River Flood Control Project, which ushered in the period of government participation in the construction of levees through the U.S. Army Corps of Engineers and the Bureau of Reclamation. As a result of the government’s role in flood control planning, the Sacramento levee system expanded dramatically—the current system incorporates approximately 1,000 miles of levees. The Army Corps of Engineers largely completed the modern levee system by the mid-1960s. The Sacramento Valley’s levee system continues to play a critical role in flood control and mitigation in the twenty-first century, although are now efforts to modify the structures to improve their role as fish habitat. The settlement, growth, prosperity, and stability of the Sacramento Valley still rely on levees in order to protect fertile farmlands and local communities from a 100-year flood event.