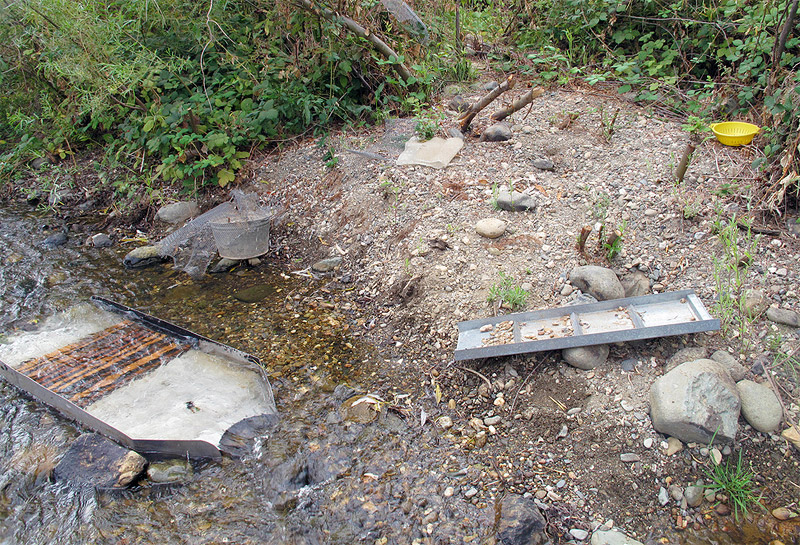 Occasionally, while out conducting fisheries surveys in West Coast streams, we come across small scale gold mining operations. On this day we encountered a couple of small sluice boxes, buckets, shovels and gold pans, but strangely no people. Currently, gold dredges are prohibited in California streams, but non-motorized recreational mining activities are allowed. Due to a lawsuit by the Karuk Tribe in the Klamath Basin, gold dredging was halted by court-order in 2009 and subsequently by a state law (SB 670) that issued a moratorium on gold dredging until the California Department of Fish and Game (DFG) completes an Environmental Impact Report (EIR) on the effects of suction dredging on protected species. The DFG released a draft EIR for public review last spring and expects to make a final determination this fall. The current Draft EIR proposes to restrict suction dredging during critical life-stages for fish (i.e., spawning, incubation, and early emergence). Suction dredging may even be beneficial (beside the chance of finding the mother lode).  DFG even notes that “The act of dredging has the potential to reduce substrate embeddedness in areas impacted by other human activities such as stream regulation and input of fine sediments associate with watershed development (DFG 2011).” Embeddedness is the extent to which larger particles are buried by fine sediment and optimal spawning gravels are less than 25% embedded for salmon and steelhead (DFG 1998). The effects of dredging on juvenile and adult fishes has not been extensively studied.