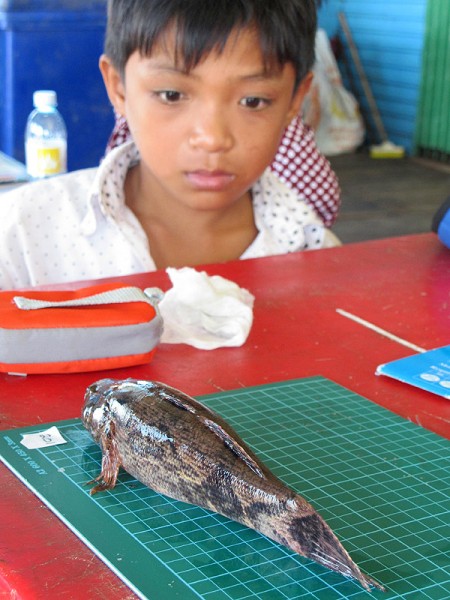 A Cambodian boy looks on with curiosity as scientists remove fish from the catch, measure them, and cut off a piece of the caudal fin. The boy lives in a floating fishing village on Tonle Sap Lake in central Cambodia. Recently, we accompanied researchers from the Scientific Capacity Development Initiative (SciCap), the Cambodian Molecular Genetics Group (CMGG) and the Inland Fisheries Research and Development Institute (IFReDI), to collect genetic samples from the fish inhabiting the lake. As part of their standard data collection, the researchers photograph fish on a grid pattern measuring board and later use a computer program to calculate the length of the fish. A section of caudal fin is also removed for genetic studies. FISHBIO, SciCap, and others are working to build up scientific capacity within the Mekong River basin so that perhaps one day this young boy will grow up to be the researcher collecting fish DNA.