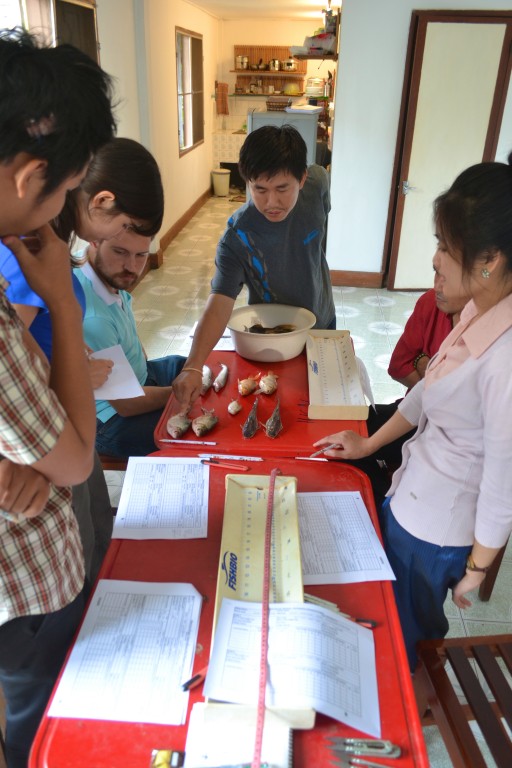 How do you fine-tune data collection methods that you hope will become a standard across the Mekong River Basin? That’s a question that has been on the minds of FISHBIO staff in Lao PDR and the U.S. for some time now. With a grant from the Mohamed Bin Zayed Species Conservation Fund, FISHBIO staff have been working to create a data collection program involving fishers throughout the region to improve understanding of fish populations in the Mekong and its tributaries.

Last month, FISHBIO staff, including newly hired Lao interns, as well as a representative from the Sustainable Agriculture and Environment Development Association (SAEDA), met in the kitchen of our Vientiane office to put the data sheet for this project to the test. Using an assortment of fish purchased at the local market, participants put themselves in the shoes of local fishers who would be working with the form. Fish were divided by species, weighed, and measured. Confusing parts of the form were quickly identified and discussed amongst the group. The challenge of the form is to make it both thorough for recording key information, as well as simple to use for a fisher whose primary goal is to get the fish to market.

Acting the part of a working fisher, participants thought about the conditions that the fish catch data would be recorded in, how to best ensure data collection methods would be understood, and what problems might arise in the field or back in the office when the data sheets are being entered into the computer. This process helped us tweak the data sheet to make it as user-friendly as possible. With a table full of specimens of different fish species, the ichthyologicaly inclined group filled the rest of the day by first practicing fish tagging techniques and then dissecting a few specimens. Fish in the Mekong come in a dizzyingly diverse array of body shapes (see Fat or flat), which made for some unique dissections. After some thorough hand washing, the data sheets were edited, ready to be introduced into the field at the pilot site the following week.