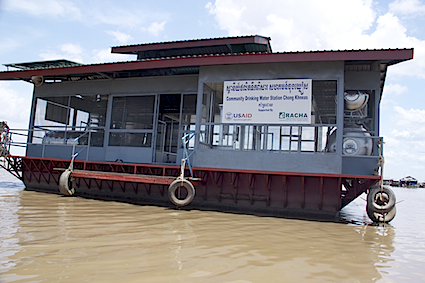 When traveling in the Mekong region one gets the impression that water is everywhere – mostly due to the billions of mosquitoes that seem to hover around you and feed at will. Unfortunately, the water is not easily consumed by local people, since most surface water is polluted and undrinkable. This problem is not limited to the Mekong, and a large portion of people in the world do not have adequate access to potable water. The World Health Organization (World Health Statistics, 2010) indicates that in the Lao PDR only 57% of the population is using an ‘improved’ drinking water source compared to 98% in Thailand. ‘Unimproved’ water sources include: surface water from lakes, rivers, dams, or unprotected dug wells or springs. In the Mekong Delta the problem is overcome in various ways, depending on the region and its resources, for example by using wells that tap into cleaner groundwater or through purification of surface water.