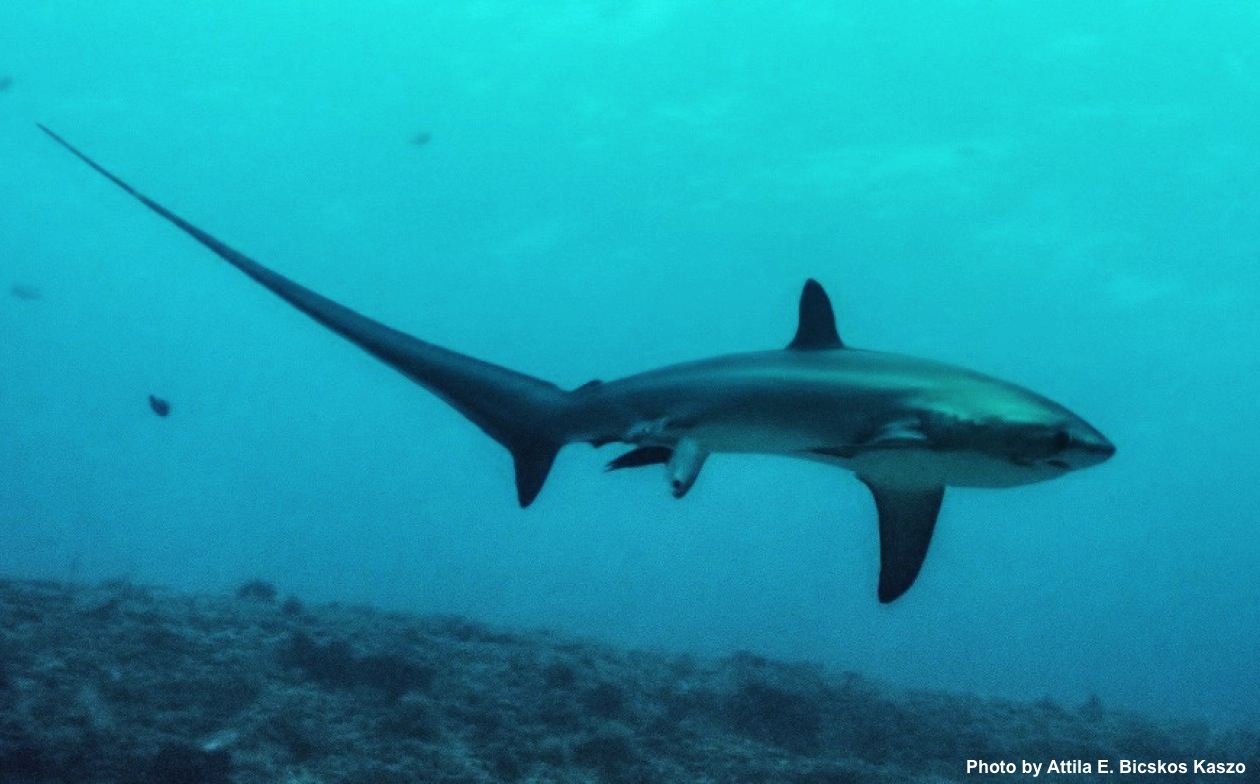 Giving birth is a common event in the animal world, but it can be very rare for scientists to actually observe in the wild, especially for ocean-dwelling species. That’s why researchers from the University of Chester and the Thresher Shark Research and Conservation Project were quite surprised to witness the apparent birth of a pelagic thresher shark (Alopias pelagicus) during a standard scuba diving survey on coral reefs in the Philippines. The divers captured the first known photos of a pelagic thresher shark giving birth. Pelagic thresher sharks are found across the world, but little is known about where they reproduce.

According to a journal article published by the researchers in the journal Coral Reefs, the scientists observed a large female thresher shark swimming back-and-forth along a shoal, looking distressed. They photographed the shark for identification, and only later realized that the head of a shark pup was emerging from its cloaca (the opening for the intestinal, urinary and reproductive tracts in sharks). The researcher who took the photo even admitted to the Washington Post that he initially thought the emerging pup was something like a jellyfish, so he moved the photo to the trash. Only after re-examination did the researchers realize what a special encounter they had. You can see the light-colored head and eye of the pup emerging from the shark’s pelvis in the photo above, near the a dark form of a cleaner wrasse.

The pupping grounds, or birthing locations, of many open-water sharks like the pelagic thresher are mostly a mystery. However, researchers do understand the reproductive biology of the pelagic thresher, since pregnant female sharks are often captured during gillnet and longline fishing operations. Sharks in general display a surprising diversity of reproductive development approaches, including oviparity (females lay eggs), ovo-viviparity (females produce eggs that are retained and hatch internally), viviparity (females give live birth) with nourishment provided through a placenta, and vivparity with nutrition provided through other sources.

Sharks in the family Alopiidae, like the pelagic thresher, are known to feed their embryos through nutritive egg capsules, which are unfertilized eggs that the mother consistently supplies to the embryo to provide it with nutrients (a photo of nutritive egg capsules in a common thresher shark appears in Natanson and Gervelis 2013). This differs from the rarer (and slightly more gruesome) ‘intrauterine cannibalism’ approach, where the larger embryos nourish themselves by eating the embryos of their smaller siblings in the uterus. Pelagic thresher sharks gives live birth to about two large pups per litter, and this low reproductive rate can make them vulnerable to overfishing. Their low birth rate combined with their off-shore habitat may explain why no one has documented a pelagic thresher birth until now.