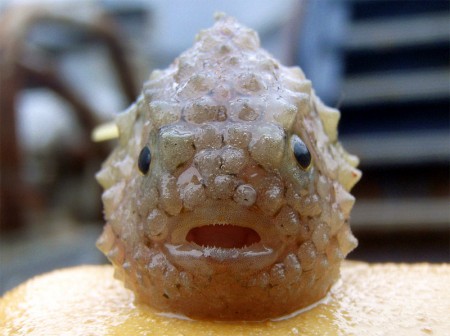 The staff at FISHBIO have traveled far and wide in their current careers, as well as for their previous research. A few of us have had the opportunity to work on research vessels off the West Coast of the U.S. and we’ve seen quite a few interesting sea creatures in our time.

In the case of the Pacific spiny lumpsucker, Eumicrotremus orbis, most would probably agree that this peculiar looking fish is downright adorable! Typically about the size of a grape (even the largest individuals rarely grow larger than a ping-pong ball), these poorly studied fish occur mainly in shallow waters to a depth of about 500 feet all along the Pacific Rim, ranging from the Washington Coast to the northern islands of Japan. As the name implies, short spines cover most of their lump-shaped body, with exception of their ventral surface, where modified pelvic fins form a suction cup that enables these poor swimmers to hold on to rocks or vegetation. Colored yellow, red, green, brown or any shade in between – depending on their surroundings – these well camouflaged fish feed on small crustaceans, worms and mollusks in shallow eelgrass beds and rocky reefs, where they can be a delight to those recreational divers who brave the cold waters of the North Pacific. 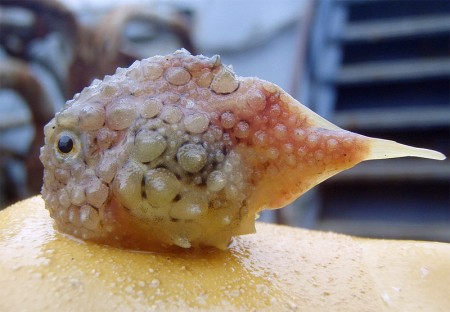 The Pacific spiny lumpsuckers, like most of the 28 species in the family Cyclopteridae, are of little or no commercial value and are not are not sought after by recreational or commercial fisheries. The exception are the larger (Atlantic) lumpfish (e.g. Cyclopterus lumpus) that are targeted for their roe, which is dyed black and marketed as “German Caviar”, a popular and affordable alternative to sturgeon caviar in European cuisine.