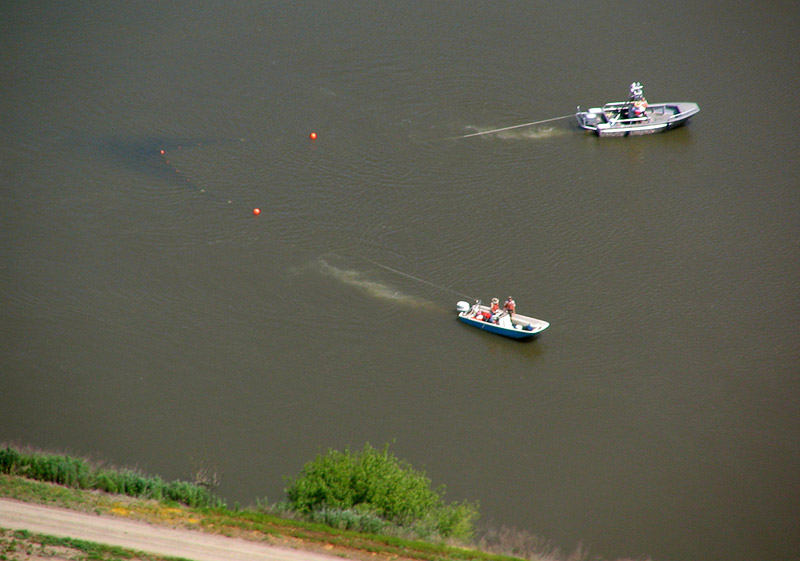 There are numerous trawl surveys conducted through out the year in the San Francisco Bay-Delta to monitor species such as Delta smelt (Hypomesus transpacificus), longfin smelt (Spirinchus thaleichthys), striped bass (Morone saxatilis), American shad (Alosa sapidissima), splittail (Pogonichthys macrolepidotus), threadfin shad (Dorosoma petenense) and all races of Chinook salmon smolts (Oncorhynchus tshawytscha). Midwater trawling has been conducted by the U.S. Fish and Wildlife Service (USFWS) in the spring at Chipps Island since 1976 to monitor the outmigration of Chinook salmon. This survey is used to estimate the number of unmarked salmon emigrating from the Delta and to recover marked smolts released in mark and recapture survival experiments like VAMP. Midwater trawls utilize a single boat towing a net with a large opening 15ft. by 30ft. (4.6m by 9.1m) that reduces down to a cod end. The sampling consists of ten 20-minute trawls per day, three to seven days per week (seven days per week during coded wire tagged fish recovery periods). 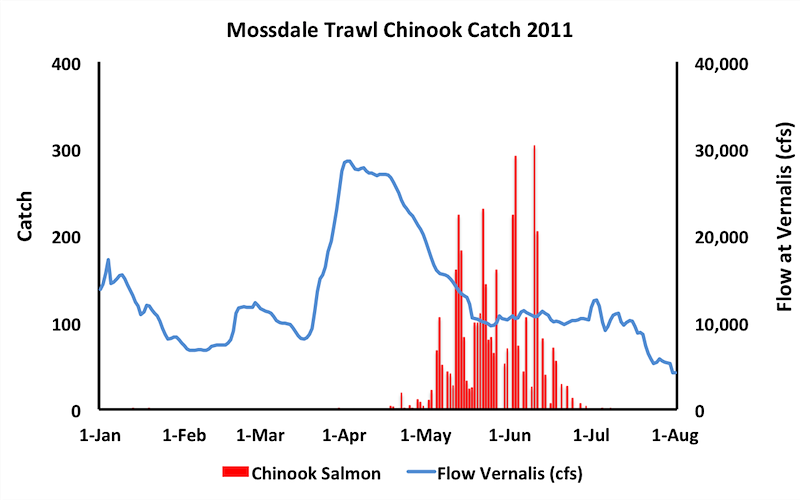 A Kodiak trawl has been operated since 1988 in the lower San Joaquin River from Mossdale to the Head of Old River. Two boats are required to pull a 6ft. by 25ft. (1.8m by 7.6m) net into the flow. The ‘Mossdale Trawl’ is currently operated by California Department of Fish & Game (CDFG) during the spring, and USFWS the rest of the year. Sampling by CDFG normally occurs during a 10-week period beginning in April and extending through mid-June. Sampling consists of ten trawls daily for 20-minute intervals, three to seven days per week, depending on fish abundance. The purpose of this annual survey is to estimate the juvenile Chinook (smolt) outmigration from the San Joaquin River; evaluate temporal and spatial distributions; and examine the relationship between juvenile Chinook salmon abundance and environmental variables. As you can see from the graph above, peak catch of 2011 outmigrating Chinook salmon occurred in mid-June and migration was completed by the end of the month.