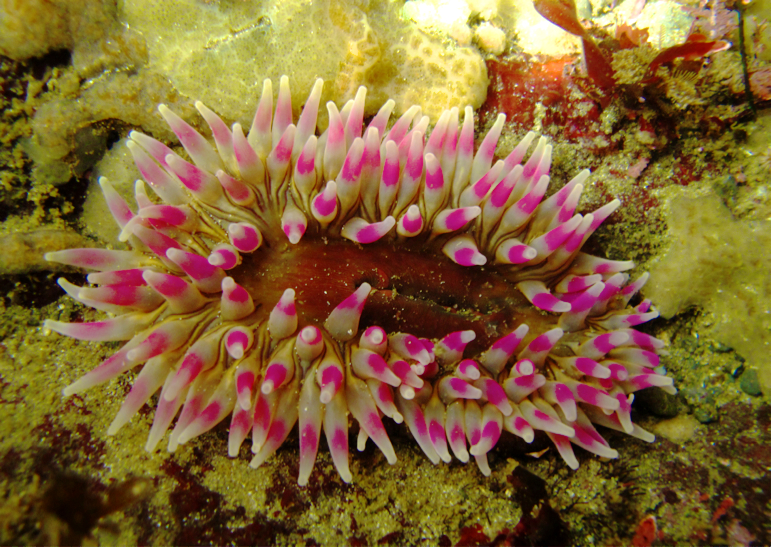 As August rolls around, recreational collection of red abalone resumes along the Northern California Coast, following a month’s reprieve in July that allows the tasty mollusks some respite amid a period of traditionally high harvest pressure. When in season, most divers keep a keen eye on the underside of ledges and crevasses where these giant marine snails are often found—but many devote little attention to the plethora of other rocky coast residents. Divers plying the coastline are in a prime spot to admire some of the other gems of the nearshore rocky reefs, which may be pushed from the limelight by the more palatable “abs.” Among the many organisms deserving a closer look are various species of often strikingly colored anemones, such as the stubby rose anemone (Urticina coriacea) pictured above.

Though they may look like flowers, anemones are closely related to jellyfish (both belong to phylum Cnidaria), and the life cycle of most anemones includes a pelagic larval stage during which they drift in the ocean’s currents to disperse and colonize new areas. Nearly translucent and rather inconspicuous during its pelagic stage, an anemone’s body and tentacles turn colorful after the animal settles on a suitable habitat and starts to grow. Stinging cells, referred to as nematocysts, are a primary defense mechanism of these soft-bodied organisms. When triggered by contact, nematocysts inject potential prey with immobilizing venom. However, unlike some of the free-swimming jellies, a brush with anemones along our coast is generally harmless to humans, and the harpoon-like projectiles firing into the fingers of curious tide pool explorers result in nothing more than a “sticky” feeling. Although these animals are not desirable from a culinary perspective, they provide plenty of eye-candy for an underwater visual feast. So check out some tide pools or stick your head in the water for a close-up view of these beautiful “upside-down jellyfish!” 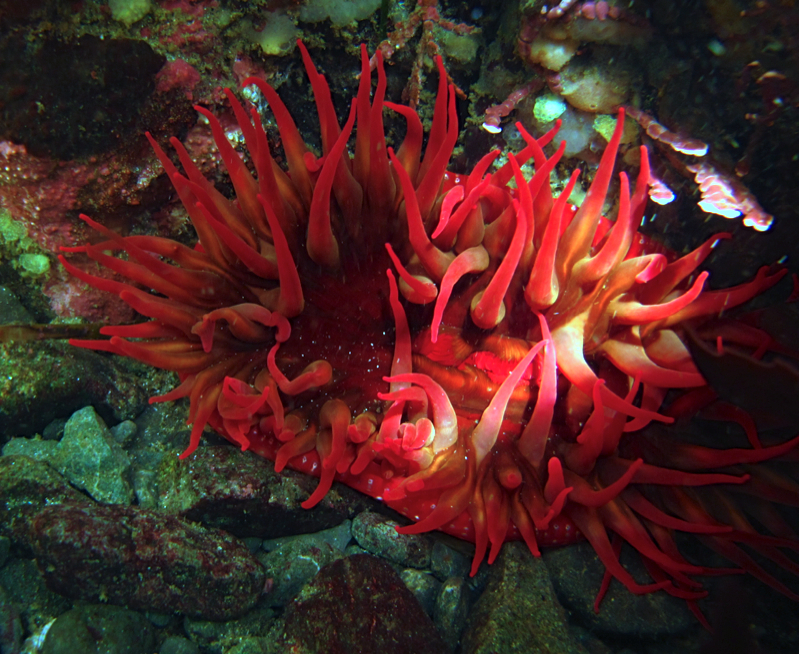